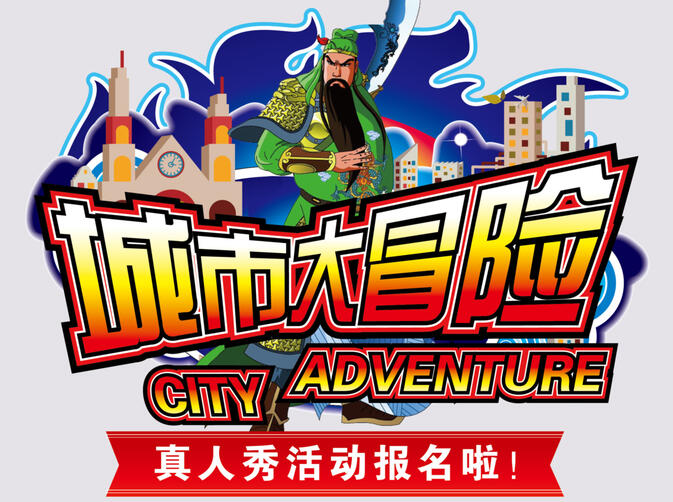 Despite being immersed in Chinese culture and speaking with locals on a daily basis, foreigners in Yunnan can find it difficult to make long-standing personal connections. This phenomenon is not a one-way street, as locals are sometimes reticent to approach laowai out of a fear of perceived language or social barriers.

Enter Cultural Diving, a non-profit group formed with the goal of putting together "fun and playful events designed to foster cultural exchange between the East and West." To this aim, the organization will hold its first major event, entitled City Adventure, on Saturday, August 16, at 3pm.

Equal parts group activity, scavenger hunt, massive interactive board game and mystery, City Adventure will pit groups of players against one another to see who can complete the game in the shortest amount of time. Based on the Chinese literary classic Romance of the Three Kingdoms (三国演义), the competition will be held in Green Lake Park.

Each team will receive maps, clues and codes which will unlock levels in the real world, all while exploring the lakes, bridges and peninsulas that make up the park. They will also travel through the story that unfolds in what many consider to be China's greatest historical novel. Characters from the tale will come to life and aid teams in discovering a secret location, helping them to complete the game. 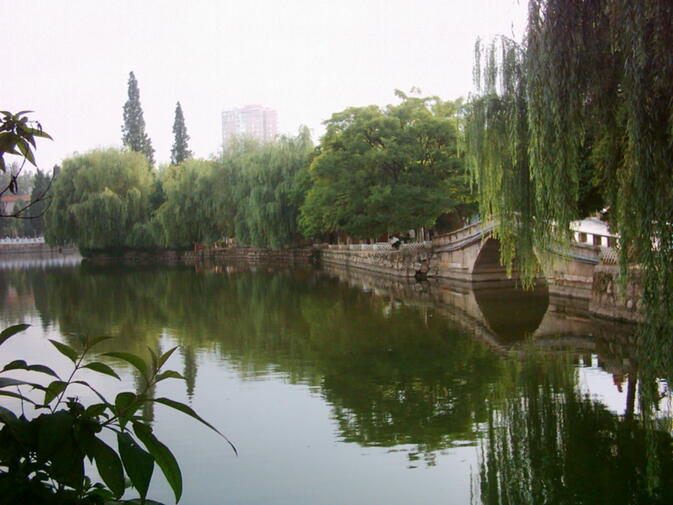 A view over part of Green Lake Park

City Adventure is the brainchild of Robin Luo and Angie Bual, both of whom now call the Spring City home. Luo is an entrepreneur originally from Changsha, while Bual hails from the United Kingdom, where she works with major arts and theater organizations.

They came together earlier this year and brainstormed how best they could create a "cultural organization which facilitates genuine interaction between cultures in a fun way". The result was Cultural Diving. In addition to their City Adventure event, the three host weekly language corners and other group activities around Kunming and at their studio on Qingnian Lu. The group is also working on a live, East-meets-West dating gameshow — based on the television program Blind Date — complete with audience, to be held this fall.

If you would like to join in City Adventure, or be a guest candidate on Blind Date, please contact Cultural Diving by emailing culturaldiving[at]yahoo[dot]com or by calling Luo at 13099909296. The Green Lake event is open to all but spaces are limited to 50 participants. A 50 yuan per person entry fee includes the game activity, drinks and refreshments at the final secret location and a coupon for one English corner at the Cultural Diving studio. People who would like to volunteer, or otherwise cooperate with Cultural Diving can get in touch via the contact information above. 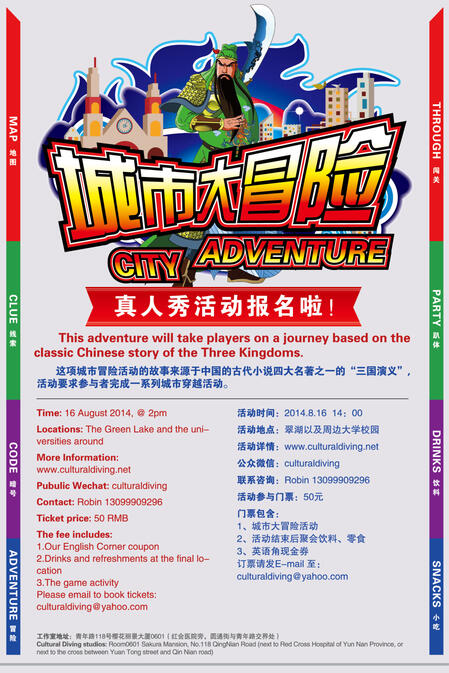