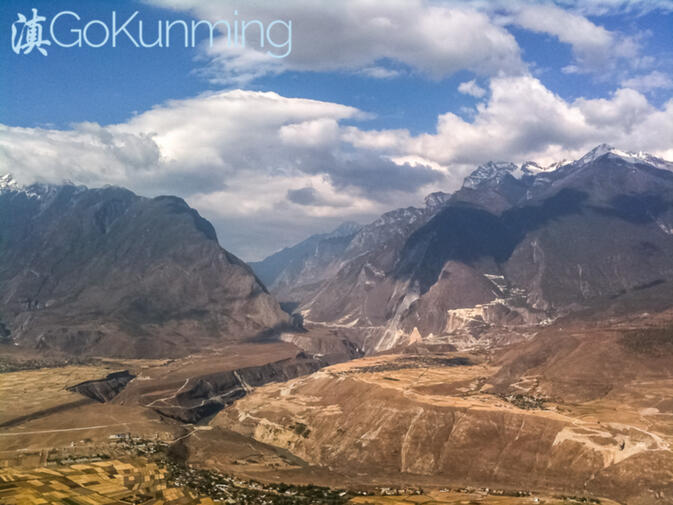 Editor's note: Adam Kritzer is a longtime Dali resident and founder of ClimbDali, a company offering guided outdoor trips and adventures in Dali and greater Yunnan.

I set off with Yang Xiao of Red Rock Adventures for Lijiang, with plans to hike from Daju Town (大具) to Lugu Lake. The trip was part of a larger project to create the longest continuous hiking route in China. Thus far, a route from Xizhou to Lugu Lake — via Shaxi, Shuhe, and Tiger Leaping Gorge — has already been completed.

After a couple of minor mishaps, which included leaving my hiking boots at a bus station and neither of us planning for the complete lack of public transportation from Lijiang to Daju, Yang Xiao managed to get hold of a friend from Daju. He agreed to make a special trip there for our benefit. As if to prove that no good deed goes unpunished, he was pulled over less than five kilometers outside of Lijiang and ordered to pay a fine of 50 yuan for not wearing his seatbelt. 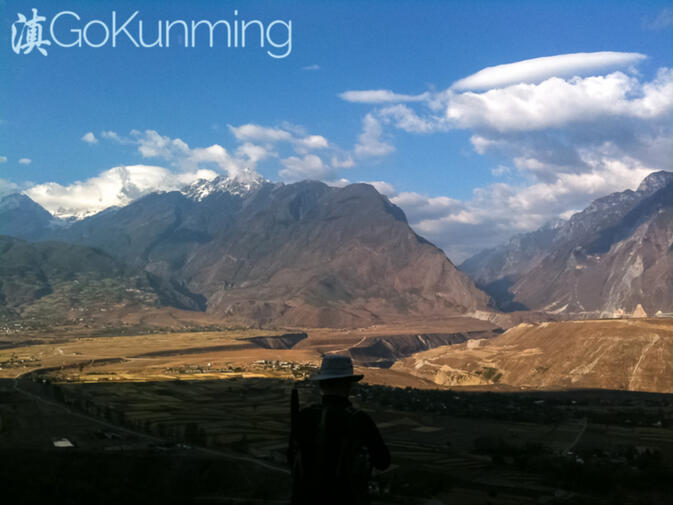 Since the road to Daju passes directly through the Yulong Snow Mountain Protected Area, under normal circumstances, we each would have had to fork over an extortionate 170 yuan entry fee. The same holds true for passengers on public buses. Fortunately, it was after five in the afternoon, and the ticket collectors had already clocked out for the day. As an added bonus, the road was virtually free of other cars and the views were breathtaking. The ride culminated with a jaw-dropping panorama of the Daju Valley — with the Yangtze River in the foreground and Tiger Leaping Gorge in the background — flanked by the towering Yulong and Haba massifs.

Yang Xiao's friend was conveniently also the proprietor of one of the few guesthouses in Daju. Aside from two other guests, we had the place to ourselves. It seems that nowadays only a handful of determined, or perhaps confused, trekkers continue beyond lower Tiger Leaping Gorge. This means that the flow of tourists to Daju has been reduced to a mere trickle. 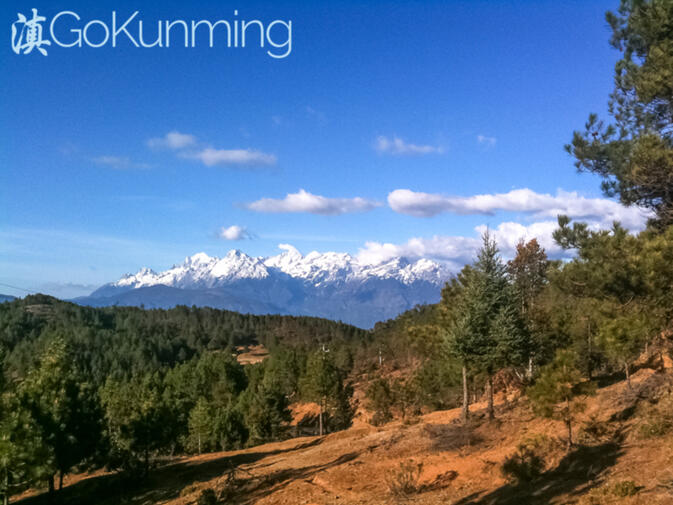 Given the lack of a bridge or car ferry that would allow vehicular traffic to continue on to Shangri-la, Daju is both literally and figuratively at the end of the road. The town itself has some charm, and is an okay place to spend the night, especially for those heading onward to Haba Snow Mountain or planning to hike the Tiger Leaping Gorge trail in reverse.

The morning after our arrival, the proprietor pointed us towards the mountains in the west, gave us some basic directions and we started off. The beginning of the hike involved a steep 500-meter ascent, but we were rewarded with awe-inspiring views as we huffed and puffed our way up the mountain. After around three hours of picking our way up the mountain — which included a few wrong turns — we managed to find the main trail, which led us to the village of Shangbaimai (上白麦). 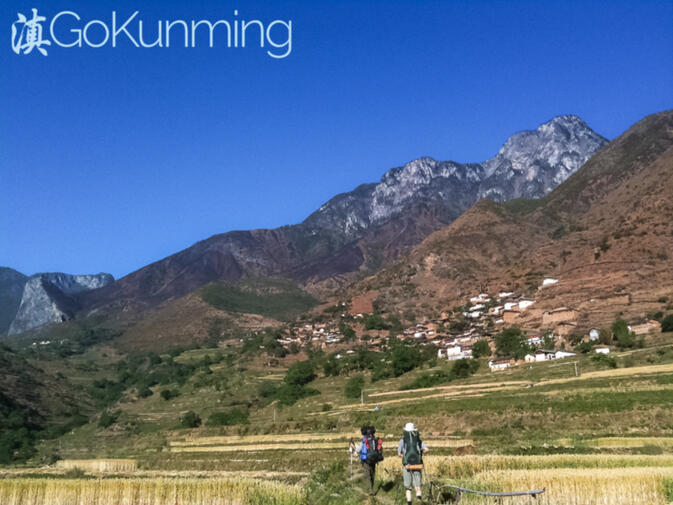 Unfortunately, it was at this point that Yang Xiao realized he had forgotten his cell phone on the trail below, and had to hurry back to find it. Determined to make the best use of this lost time, I attempted to scout a trail through the forest ahead that would allow us to avoid walking along the main road. Otherwise, I passed the time by making conversation with our Lisu host. She informed us that she spends most of her time foraging for a medicinal plant that happens to be one of the main ingredients in Yunnan Baiyao. One jin — or 100 grams — she told us, often commands the hefty price of 300 yuan.

Two hours later, Yang Xiao returned, and we continued along the trail that I had scouted while he was away. It brought us into a beautiful section of forest before suddenly petering out. After a half hour of bushwhacking, we stumbled onto what must have formerly served as an illegal logging road. It was now overgrown and perfect for walking. 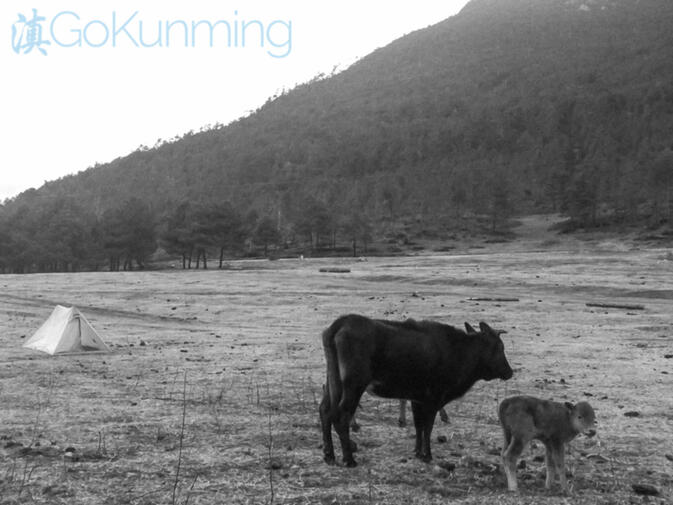 In the late afternoon, we arrived at a high pasture and after politely rebuffing offers by a local herder — none other than the husband of our newfound Lisu friend from the village I had idled in earlier — to spend the night in his hut, we pitched our tents and began cooking dinner. While we were preparing our food, some pesky cows nearly pilfered a two-kilogram bag of trail mix from my backpack. Otherwise, we had the campsite to ourselves as the herder left his hut and returned to his village shortly after we arrived.

The clouds dissipated overnight and we were treated to clear views of Yulong Snow Mountain on day two. Brimming with confidence from day one, we quickly packed up camp and continued west. We spent most of the morning trying to find a walking trail that would allow us to continue skirting the road. After wasting a lot of energy and more than two hours, we retreated and followed the road for around three kilometers before we arrived at an intersection of sorts. 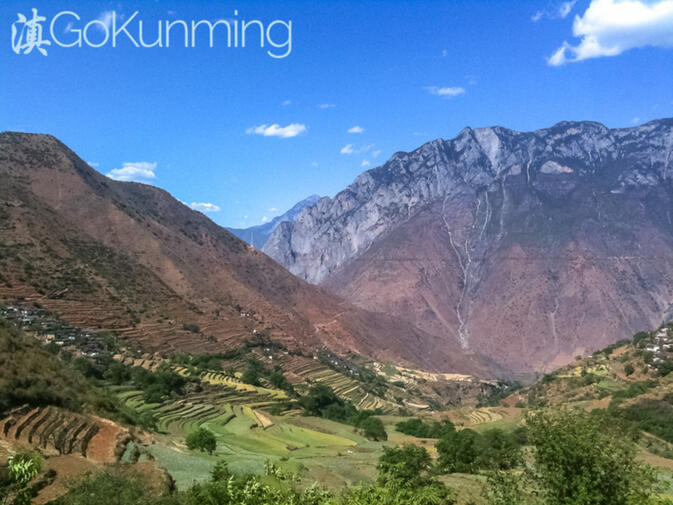 We were somewhat shocked to be standing on a newly-sealed asphalt road that had been carved straight through the mountains. So new in fact, it wasn't even indicated on our map of the area. We learned later that it was built to facilitate construction of two major dams near the Great Bend in the Jinsha River.

We flagged down one of a handful of cement trucks that passed us. The driver was gracious enough to transport us to the next village, saving us from having to walk another seven kilometers on pavement. More importantly, the ride spared us the psychological demoralization that would have resulted. There is apparently a small trail which would have enabled us to bypass this road, but it would have been out of our way, and for little purpose. 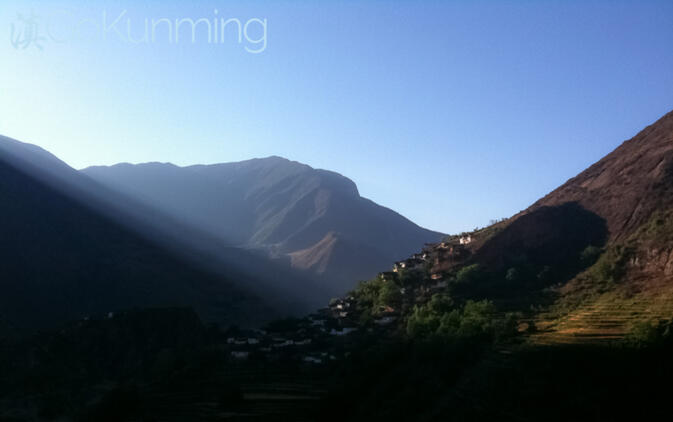 Upon arriving at a fairly impoverished Yi minority village, we asked for further directions and were politely shown the way. From there, the path wound down the mountain and through a beautiful canyon with steep cliffs on both sides. Part of the trail had collapsed, forcing us to take a detour down into the bottom of the canyon, where we walked alongside lush vegetation and a limpid, gurgling stream.

We continued on and were treated to our first views of our destination for the evening, Baoshan Village (宝山村) — not to be confused with the large prefectural-level city between Dali and Ruili, Baoshan (保山). Unfortunately, it was still quite far away and we realized that if we wanted to arrive by sundown, we would need to quicken the pace. Descending toward the village, we passed through fields of barley and lavender, with numerous vats along the way used to concentrate their fragrances. It was at this point that we began to notice mysterious green arrows along the trail, which had improbably been spray-painted for a trail-running race the previous month. 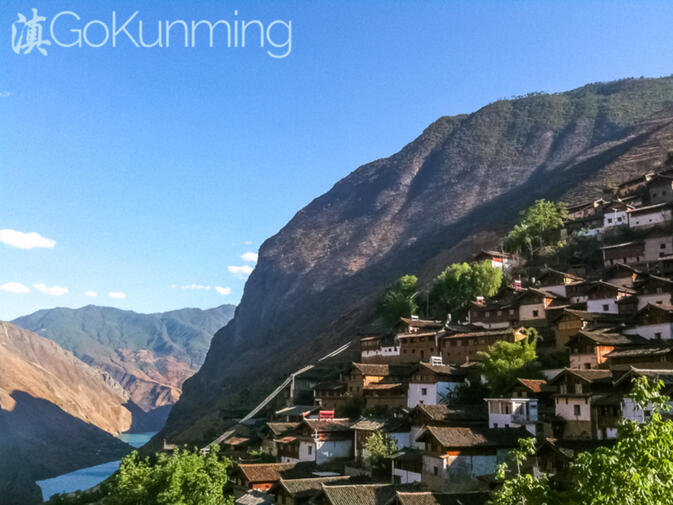 We arrived in Baoshan just before dusk. The village itself was like any other except for one important aspect — it was built on top of a cliff, probably for defense purposes, lending it the nickname Stone City (石头城). Another important difference was that since it wasn't practical to build a road into the village, it was completely free of motorized vehicles — a rarity nowadays, even in Yunnan.

There was a plaque at the entrance of the village which indicated that a fortress had originally stood there, but it had been easily taken by the Mongols en route to their conquering the Kingdom of Dali and ultimately the rest of China in the thirteenth century. Despite its utter beauty and uniqueness, the village was virtually free of tourists. We settled into a guesthouse, and unabashedly enjoyed steamy showers and a hot meal after two hard days of hiking.

Be sure to check back next week for part two of this article. 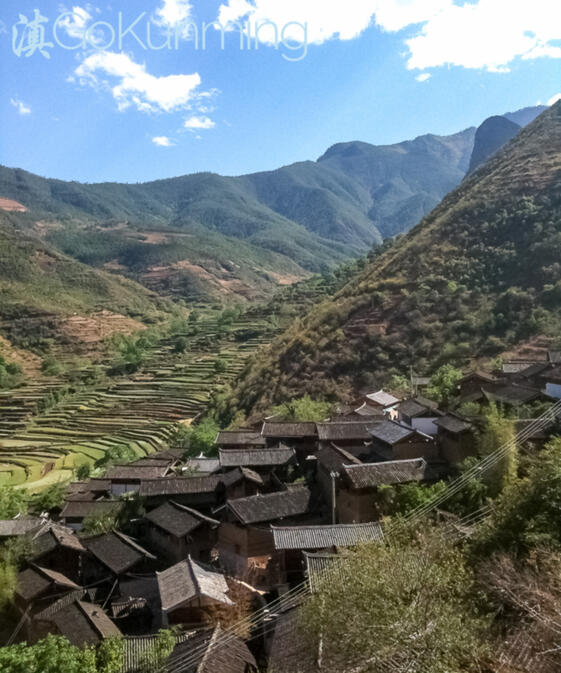 Getting Away: Tiger Leaping Gorge

Getting away: Daju Town

Great hike Adam. The 2 opening photos of Daju valley are exactly what i wanted to see for assessing upper winds to fly Yulong mountain on paraglider. I instantly recognized Yulong's pointy N.E. end from studying that valley on google-earth so many times.
As for getting there you also answered some of my questions and suspicions.

Adam you are a true pioneer.

I recently undertook a bike trip to 'Big Tool' and put some pictures up of the same valley. It's amazing how dreamy it is.

Check them out (especially the gallery at the end):

Later, I heard that Daju used to be quite busy but the requirement to pay 200 RMB per person to simply use the road next to Yulong reduced the influx of tourists to a trickle. There is still an establishment rocking a "Best restaurant in all of China" sign, it seems to be mostly used for playing Mahjong as was the hotel we were staying in. Surprising they weren't out of business yet.

The next day we crossed the Yangtze and mounted on the other side. This also yields interesting pictures of Daju.

A few weeks ago I did a bike ride which overlaps a lot with the hike Adam describes here. Not exactly, of course. Adam was on the old trails, and I was on the new road. Still, it was an amazing place for cycling. Read about it on my blog here: matthartzell.blogspot.com/[...]

Anyone have any details about the Xizhou to Lugu hike—detail itinerary, trail markers, blog, etc.?