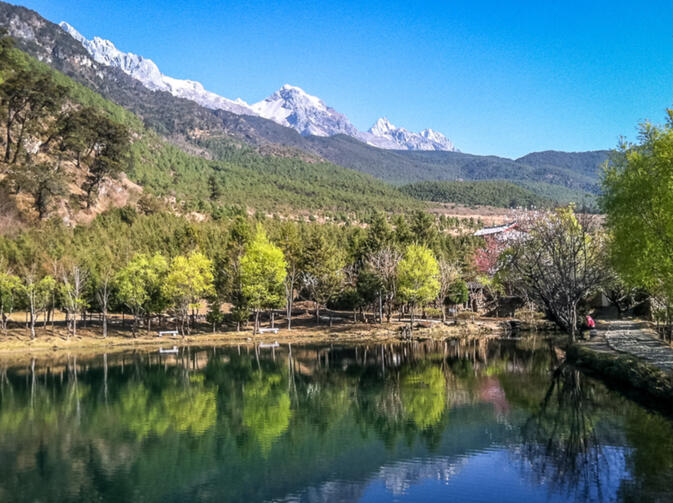 Editor's note: GoKunming contributor Amanda Kaminsky lives and works in Lijiang. You can read more by Kaminsky on her blog, Malatang (requires proxy), where she writes about food, language and many other things.

Lijiang's Dayan Old Town is a beautiful place, but the crowds of tourists, neon lights of Bar Street and row upon row of identical souvenir shops can begin to grate on the nerves after a while. That's why we decided to escape to Yuhu Village (玉湖村) for a day of peace and relaxation. 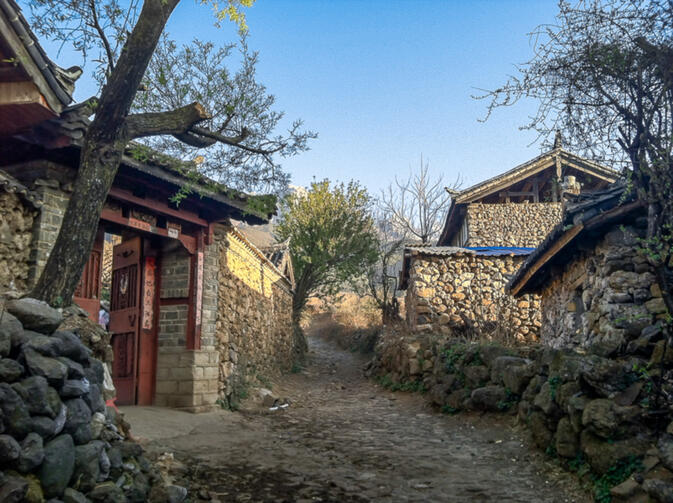 Nestled in the foothills of Yulong Snow Mountain, Yuhu Village — called Nguluko in the Naxi language — was the chosen home of Joseph Rock, the famous Austrian-American botanist credited with introducing the Western world to northwest Yunnan's unique ecological and ethnic landscape.

When Rock lived in Yuhu from 1922 to 1949, there were certainly no guesthouses, horseback tours, or public buses. There were definitely no ladies selling flower crowns and other souvenirs to tourists. But much of the village has remained unchanged since then — the cobblestone roads, the traditional Naxi houses, and the clucking of chickens coming from every courtyard. 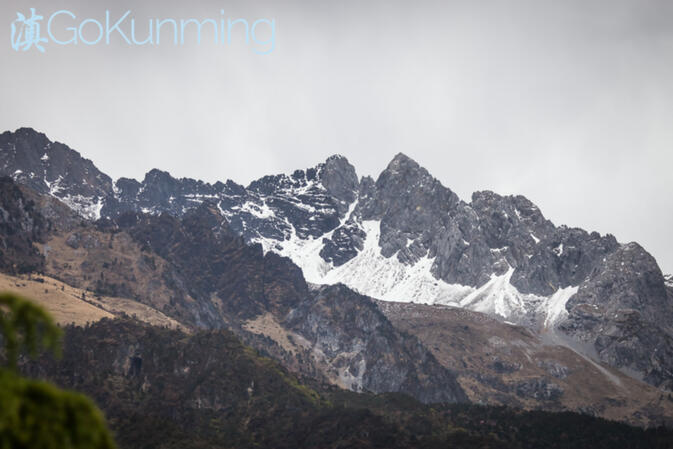 We arrived in Yuhu early in the morning, when the sun was just rising above the eastern hills and illuminating the craggy peaks of Yulong Snow Mountain. The village was quiet. We wandered among the shuttered houses, pausing to buy breakfast from a small store where locals were lining up for hot mantou — or steamed buns — and other snacks. We passed by the former residence of Joseph Rock, now preserved as a small museum, but it hadn't opened yet. The other biggest tourist draw in the village seemed to be guided horseback tours, so we decided to check one out.

Before we knew it, we were on the backs of little bay ponies, walking briskly through the fields and among the scattered houses at the outskirts of the village. Our guides were a pair of local teenage sisters. They picked azaleas and chatted in the local dialect as they led the ponies away from the village. The girls explained that they work as guides on weekends when they don't have too much homework. It seems like a pretty fun job, leading ponies through the fields and mountains of their beautiful hometown. 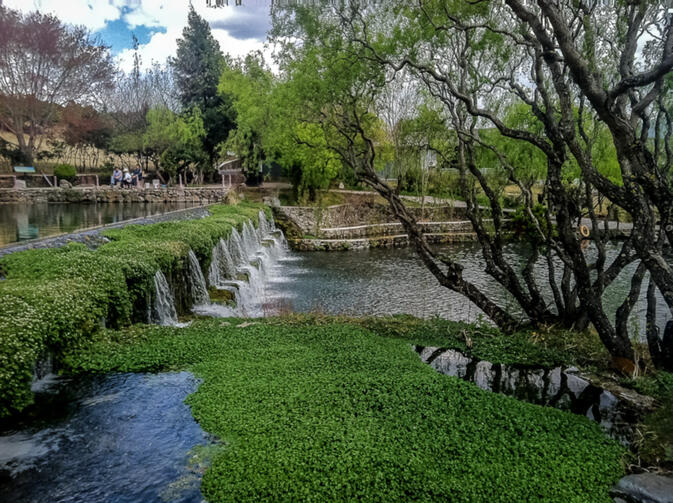 We arrived at Yuzhuqingtian (玉柱擎天) a scenic spot centered around Jade Lake. It's an overused cliché across China, but the still, quiet water really did resemble the glassy surface of polished jade. With the pony safely tethered to a post, we strolled around the lake, over a bridge, and climbed a flight of steps up to a small spring. The clear waters are believed to cure eye conditions, rheumatism and many other ailments.

Long ago, this scenic area was the summer playground for Lijiang's Naxi chieftains. Today, it has been restored and maintained for the near exclusive benefit of tourists. Despite the vaguely artificial nature of Yuzhuqingtian, it was nevertheless incredibly peaceful, and the views of Yulong Snow Mountain were spectacular. 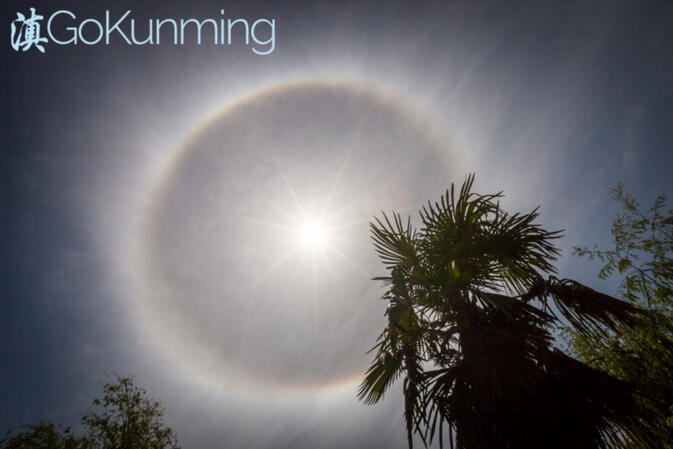 The sun above Yuhu Village, ringed by what is apparently referred to as a halo, or nimbus

When we returned from the horse ride, the village had woken up a bit. The main parking lot was bustling with locals carrying baskets on their backs, children playing, and dogs lounging in the sun.

After lunch, we visited Yushui Village (玉水砦), which contains a system of ponds and streams flowing from a sacred spring. The site is a celebration of the Dongba religion, the spiritual tradition of the Naxi people. The centerpiece is a shrine to the Dongba god of nature, who is represented with the head of a person and the body of a snake. 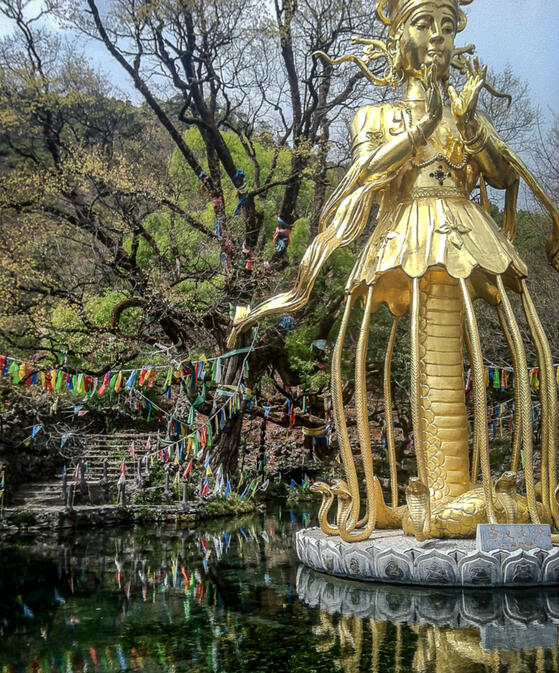 The water flowing through this shrine is so clean you can drink it. Signs in English and Chinese explain the traditional Naxi belief that nature and humankind are half-brothers, and that they must respect each other to maintain peace in the world. We enjoyed the simplicity and pragmatism of this analogy — unlike some esoteric spiritual belief systems that represent humans and nature as 'one', the Dongba belief takes into account the instinctive human tendency to view our society as separate from nature. In Naxi culture, there is a distinction between humans and nature, although we ultimately come from the same source.

Wandering among the pristine ponds, flowering trees, and preserved traditional houses, it was easy to believe that the half-brothers have resolved their differences once and for all. By the time we arrived back in Lijiang, we felt thoroughly relaxed and prepared once again to face the crowds. 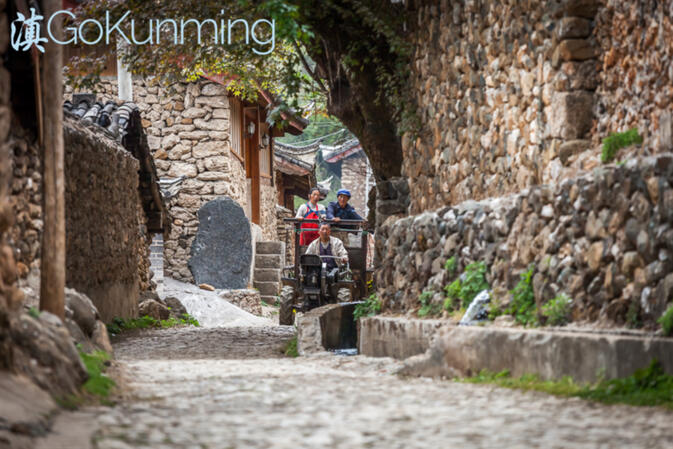 Bus 17 runs between Xiangshan market bus station (象山市场汽车枕) in Lijiang and Yuhu Village. The sign posted at Xiangshan market is wrong — there are four buses per day, not three. They leave from Lijiang at 6:45am, 10am, 2pm, and 5:30pm and cost one yuan. Sometimes the schedule changes, so ask around before you go.

We met a friend who drove us from Yuhu Village to Yushui Village, but you could easily walk there in about 30 minutes. Yushui Village has a 50 yuan entrance fee, and they may also ask you for an 80 yuan village conservation fee, unless you have proof of residence.

Keep in mind we only visited a fraction of the sites one can explore from Yuhu Village. In addition to hikes on the slopes of Yulong Snow Mountain, you can also visit Yufeng Temple (玉峰寺) or take a longer horse trek visiting several other scenic spots. 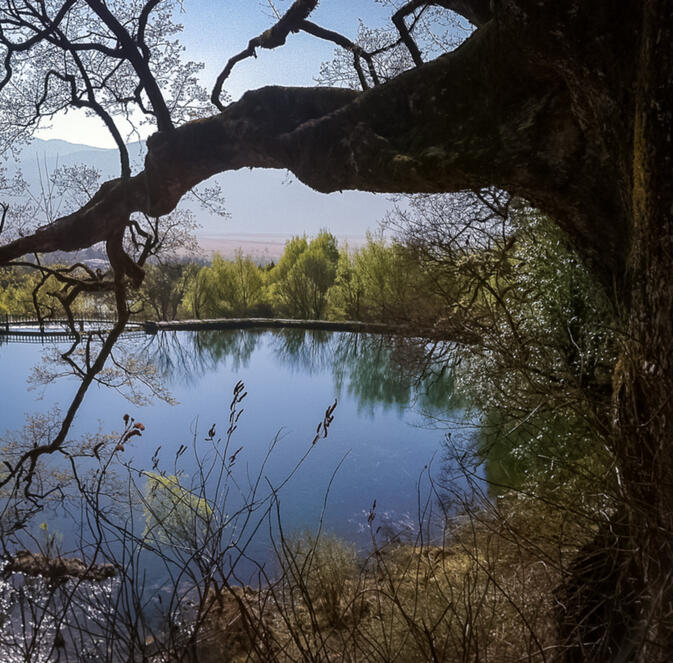 Looks like a very beautiful place. But is that huge brass thing in the photo as tacky as it looks from here?

Great photos, as ever. Something GoK does really well. Thanks.