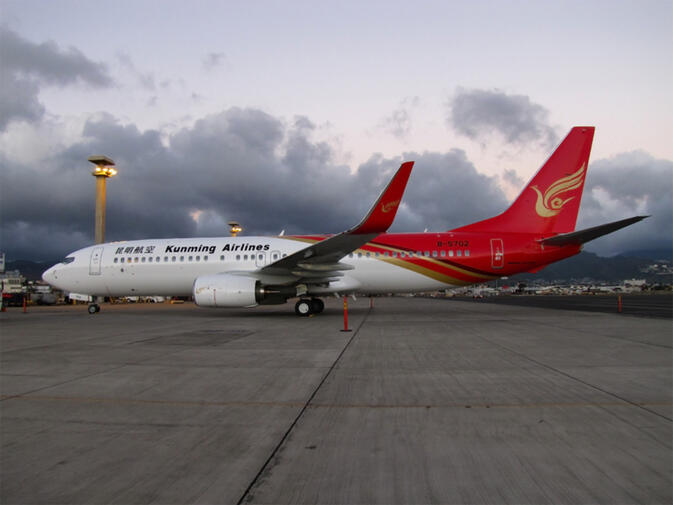 Since opening nearly two years ago, Kunming Changshui International Airport has been beset by a series of design flaws and repeatedly besieged by unruly passengers. This week, airport staff endured a new type of incident — a bomb threat made by a traveler which was eventually found to have been a hoax.

On the night of March 17, passengers at the airport boarded Kunming Airlines flight KY8285, scheduled to depart for Guangzhou at 11pm. As people took their seats and the cabin crew prepared for takeoff, an as yet unidentified man approached a flight attendant. He asked the stewardess, surnamed Zhao (赵), for assistance in stowing his bag and then quietly told her he had smuggled explosives aboard the plane.

Zhao, who was interviewed by the press three days after the incident, said she was confused by the man's statement, which was reportedly delivered with a large smile. Unable to tell if the man was joking or actually serious, Zhao felt she had no choice but to report to threat to other members of the crew who then relayed the warning to airport security.

Airport police arrested the man who claimed to be in possession of a bomb and also took an individual traveling with him into custody. The other passengers were escorted off the plane and made to pass through security procedures again. At the same time, emergency response crews searched the aircraft for signs of incendiary materials and put all baggage through further security screenings.

No explosives were uncovered on the plane or in the re-screened luggage. Flight KY8285 was finally allowed to depart around two in the morning, three hours after its originally scheduled takeoff time. The man who started the entire ordeal was found not to be transporting anything dangerous on his person but may still face criminal charges.

Kunming Airlines customer service received dozens of complaints and demands for refunds following the incident. In response, officials at the company have said they plan to file a civil lawsuit agains the hoax bomber. During legal proceedings, the air carrier will attempt to recoup monetary losses incurred by the flight delay as well as costs associated with summoning emergency crews to the scene. A spokesman for the airline has also said he hopes litigation will discourage further hoax attempts.

Kunming's airport is no stranger to bizarre and sometimes inexplicable actions by travelers. Less than two months after the airport officially opened, thirty angry passengers rushed onto the tarmac to protest their flight being delayed more than ten hours. Perhaps more infamously, a Yunnan official was caught on camera demolishing a check-in kiosk after he and his family arrived late a second time for their flight.

Airport woes have not simply been caused by unruly or stupid passengers. The facility has been completely shut down multiple times by inclement weather, often stranding thousands of angry people. Such episodes have prompted many to question why the 33.5 billion yuan (US$5.4 billion) project was constructed in an area known for its unpredictable fog.

He should face criminal charges, and the airline should also attempt to sue for costs.
There have been too many of these hoaxes, in the past they have been because people were late for a flight or other stupid reasons.

When things like this happens, hundreds of people are often affected, and some of these effects can have financial ramifications for other passengers, as well as causing alarm.
Leniencey only sends out the wrong message. IMHO.