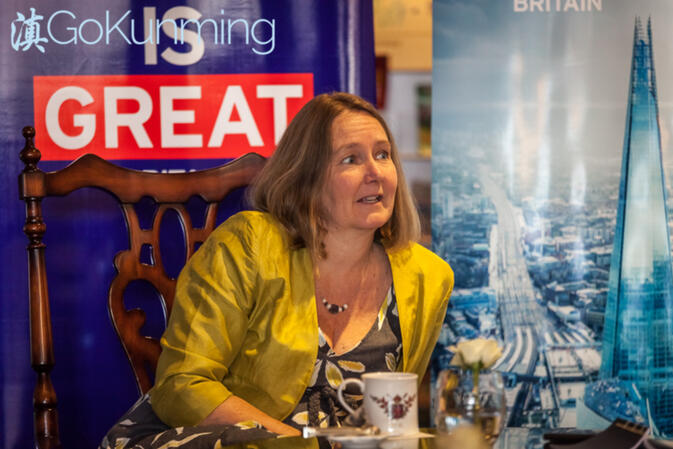 Beginning April 15, Kunming will host a series of events sponsored by the British Embassy and the British Council. The week-long affair, called 'Great Britain in Kunming' or simply 'British Week', will be a showcase of all things UK. GoKunming sat down with Tina Redshaw, British Consul-General in Chongqing, at Green Lake Hotel to talk about the event as well as her career as a diplomat.

GoKunming: Is this your first visit to Kunming?

Tina Redshaw: This is my second trip in an official capacity, the first being in early December [2013].

GK: Do you have any general impressions of the city?

Redshaw: Well, I know it from the past, too. Yunnan was a place I used to come to frequently when I was a student in Nanjing in 1983 and subsequently while I was working. I know it reasonably well. What's nice about it is, despite all the ways its changed and developed — especially here where we're sitting beside Green Lake — it is well-preserved and pretty much the way I remember it. Which is nice because there are very few places in China that I can say that about.

GK: You are here promoting British Week, which will be held in April, can you give us a general idea of what that week will entail?

Redshaw: British Week is a series of events introducing people to UK culture, business and education. Our original aim was to hold the events this week starting on Monday, but after the terrible terrorist attack on the first of March, it wasn't appropriate to hold the outward-facing public events anymore. However, we did have a number of events that relied on people from the UK being here. And because those people won't be here in April, those events went on as scheduled.

Those events include an author invited by the Education and Culture Section of the Consulate-General to promote the Bookworm Literary Festival, as well as a facilitator who is here to hold a series of creative thinking workshops. He was coming anyway and had done some workshops in Chongqing, so his Kunming events went ahead. In fact, that's where I've just come from. And then we also had a business seminar on the experience economy and creative industries yesterday. So those have gone ahead but we are doing our full week of postponed activities in April.

There will be more business events and we will have exhibitions; one of photo reportage by a Chinese photographer working in the UK and then we're also putting on a scientific exhibition of photos taken by Joseph Needham when he visited Yunnan for the first time in 1944. It will be held at the science museum and the Chinese photographer's exhibition will be on at the Yunnan Provincial Library. The Needham exhibition is very science-oriented and we will have a science roundtable, but the details are still being worked out.

We're also likely to have some education events which are yet to be determined due to the postponement. I will certainly be visiting at least one school and there's likely to be a green car design competition which the British Council has already run in Chongqing. We wanted to bring that here to Yunnan as well.

There is likely to be an inward investment seminar inviting local companies who may be interested in looking at investment possibilities in the UK — not just to talk about different sectors of investment, but also some of the practicalities of what it means to invest in the UK, how to go about it, and who they should talk to.

Another event in April we will definitely be hosting is a tourism salon introducing tour agents and their clients to sites and attractions in the UK. We've done these in other places and they are really popular. For this part of China, there are direct British Airways flights from Chengdu to London and it is now relatively easy for people here to get to Chengdu and then fly that route instead of first going to Shanghai or Beijing. 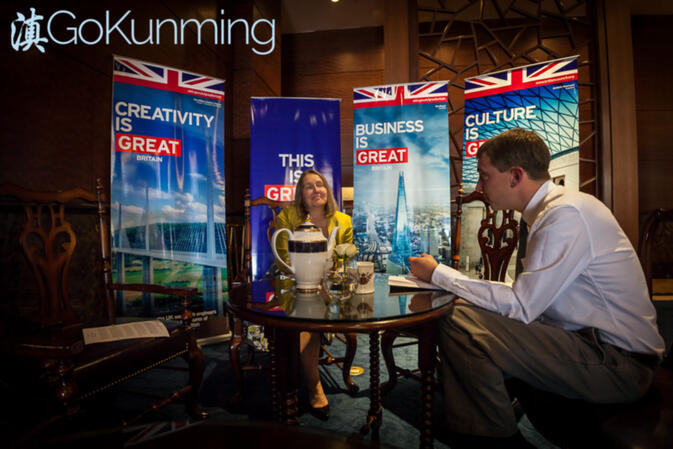 GK: Is there any sort of reciprocal event in the UK sponsored by the Chinese government?

Redshaw: I don't know yet. It's interesting you should say that because Chengdu is doing exactly that — a Chengdu Week in the UK in May. Chengdu is particularly outward facing, but I would be surprised if different provinces and cities, those looking to increase tourism, didn't do more of these events. And we would obviously encourage that to happen.

GK: Chengdu and Chongqing are probably more connected to the UK than Kunming, so is British Week an attempt to reach out more to Yunnan?

Redshaw: Absolutely yes. Although there are a handful of British companies and Britons in Kunming, I think Kunming and Yunnan generally haven't got many links with the UK. So our desire to put this on is very much to introduce ourselves to the people of Kunming, and more broadly to people across the province. I would say the average person in Yunnan isn't particularly familiar with UK tourist attractions or how to invest.

Television programs like Downton Abbey and Sherlock — Sherlock in particular — have taken China by storm. People have a growing awareness of UK television and film production at the moment. When the prime minister came to China last year, the second or third question posted to his Weibo account was 'When is Sherlock season three coming out? Can you speed it up?' So we feel there is certainly a lot of interest and we'd like to capitalize on that and give people more of what they want. 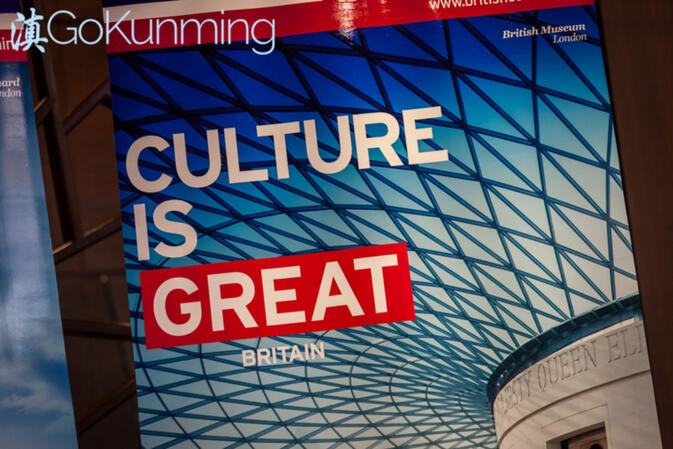 GK: To that end, are there more events like British Week in the works for southwest China?

Redshaw: Nothing is fully planned — but we'd like to do something similar over a September weekend in Chongqing. We're talking to the authorities there now about organizing it. We're speaking with the China-Britain Business Council on a UK retail brands mini-exhibition in one of Chengdu's downtown shopping areas. I think that will happen the end of June.

Interestingly, when we started talking to the local authorities here about doing British Week in Kunming, they were interested in running a series of events but were especially interested in UK retail brands. There is clearly an interest in buying from the UK and sourcing products from the UK. And I think that is attributable to feeling more secure about food safety standards. I've really noticed that concern as I've spoken with people across the whole region. People know UK products — and not simply food — for their quality.

GK: Many people in China associate the UK with high standards of academic learning. Will education be a focal point of British Week?

Redshaw: We won't necessarily have representatives from education establishments, but educational excellence is something that will be theme during the week. In fact, one of the activities will be an alumni event focused on uniting kids in Kunming who have studied abroad. They can reminisce about their time in the UK.

To me, it's always quite interesting to meet Chinese students and hear about what they miss from England. You know, sometimes it's actually food. Given that when they go to the UK they usually miss Chinese food, its funny to hear that when they come back, they miss being able to go and get fish and chips or English tea.

GK: A bit of a random question: United States first lady Michelle Obama is coming to Sichuan in about ten days. Is there any chance your paths will cross?

Redshaw: I don't know. If the United States Consulate organizes something with the diplomatic community, it is possible. There is a lot of official overlap. There are ten consulates in Chongqing and another ten in Chengdu, I think. So we tend to see each other quite a lot. If an event is organized, I will certainly go. 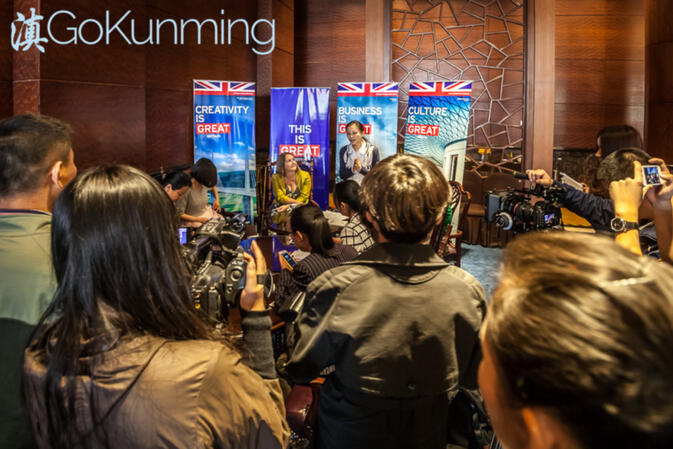 GK: You were Her Majesty's Ambassador to East Timor for several years, are there any similarities or odd connections between your time there and your time in China?

Redshaw: Perhaps not many similarities. However, my role as a diplomat doesn't change in those two circumstances. It's always about representing the UK and also very much about gaining a deep knowledge about the country [where I've been posted] and its circumstances — the politics and economics and of looking at how to build the strongest bilateral relationship possible.

An interesting story, with links to both countries, is from when I worked in the embassy in Beijing. I worked very closely with the Chinese peace-keeping academy, which is located between Beijing and Tianjin. China was just beginning to develop a peace-keeping capacity attached to the United Nations and we provided funding, English-language training and materials, as well as driver training, which was interesting. Then some of the peace-keepers, who I had actually visited during their training, were posted to East Timor, including an academy director. So there was a very nice overlap. I had been responsible for overseeing the project while in Beijing and I attended a ceremony recognizing their service when their tours of duty were over in East Timor.

GK: You've spent much of your professional life in China. How would you characterize current relations between China and the UK?

Redshaw: The bilateral relationship is good, with a wealth of cooperation and exchange. For example, there is quite a focus on education exchanges. One of our education ministers has just been in Shanghai and invited some maths teachers there to go to the UK to help us out in an area we are perhaps not doing as well as we'd like. But likewise, the creative thinking workshops we've been delivering are a bit of a UK export.

These workshops offer creative thinking and problem solving skills to help make more well-rounded students. Speaking to headmasters and teachers who have hosted the workshops, they are incredibly welcoming of these sorts of approaches to education. People are realizing that there may have been too much of a focus on rote learning. Yes, Chinese students earn high marks, both here and when they go overseas. But I spoke with the president of a Chongqing university about how high performance in an academic setting doesn't necessarily translate to success after school. We talked about how many graduates hit a ceiling in their careers because they [haven't developed a] creative thinking skill set.

Overall, our two countries enjoy a very good relationship, a very strong one. As the prime minister said when he came here, we are very much partners for growth — trade volume is increasing, and investment from China into the UK is both welcome and growing. 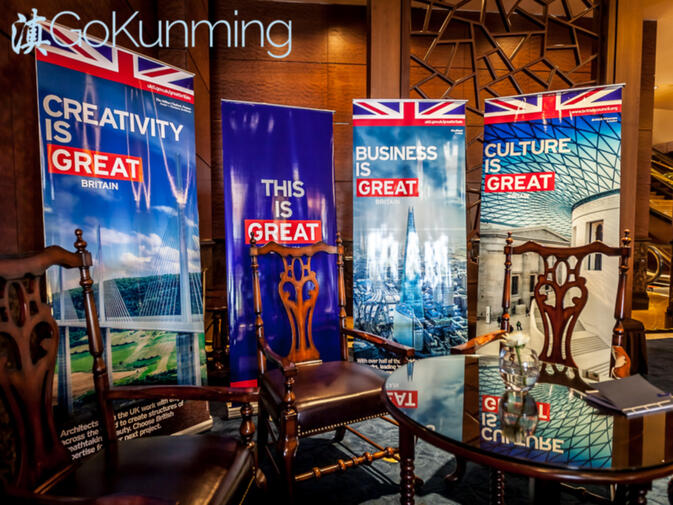 Excellent interview. I knew Tina when she was the head of "Voluntary Service Overseas" in China and she's a really terrific advocate for China and development issues. Great to hear more from her here.