The Dwarf returns to Kunming 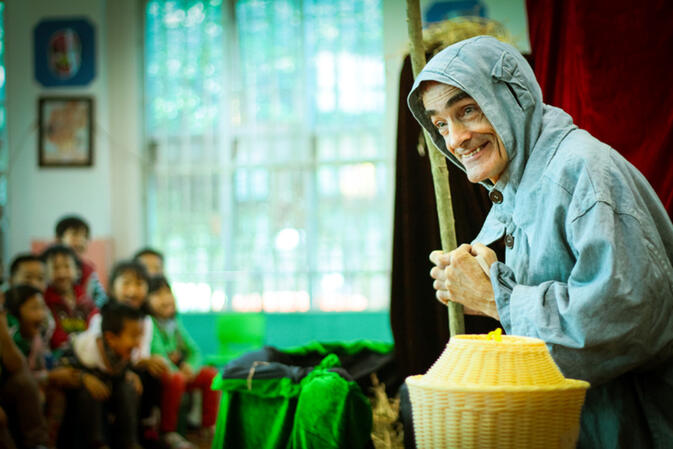 Jean-Marie Bevort, the maestro of European performance company Fratelli Fiasco, is once again coming to Yunnan to stage a series of children's theater performances. During the month of March, Bevort will tour Kunming schools, bringing his extensive experience as a street and stage performer to Spring City students.

Fratelli Fiasco, first came to Kunming in 2011 to see if its special brand of performance would translate to a Chinese audience. The concept of doing theater in schools is still fairly new in China, but stagings of The Dwarf were runaway successes nonetheless.

The following year, Bevort toured well-known private kindergartens in Kunming for more performances. Using the revenue raised from that tour, his theater company undertook an expedition to a remote part of Honghe County to perform for 900 kids in a mountain village. As he explained in a 2012 GoKunming interview, his show appeals to kids from nearly all walks of life:

The piece is suitable for an audience in any country because it is essentially without language. The dwarf communicates in an incomprehensible language that we humans can't understand. The style of acting that I use to portray the dwarf character is called bouffon. The audience has to closely follow and interpret the dwarf's gestures and actions to stay with the story. The Dwarf provides the audience with a chance to dream for a while. The reaction of the audience is strikingly similar in Europe and China. The children are swept away immediately and the adults typically really get into it as well. 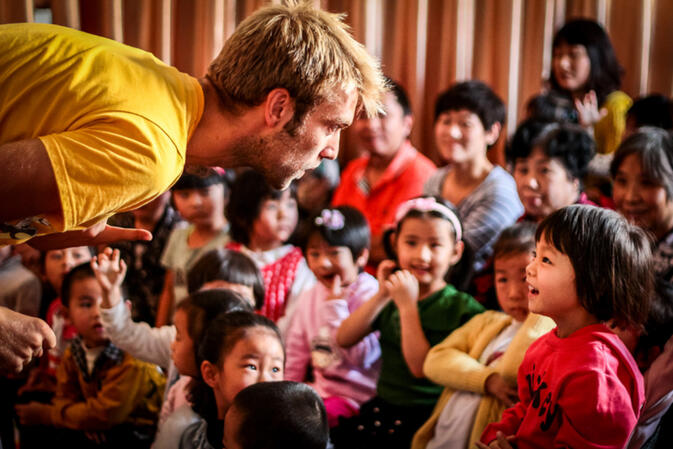 In Bevort's portrayal, the central character is not a human dwarf but a mythical forest spirit. This is why he speaks his own forest dwarf language which no human could possibly understand, and that is one of the reasons why the show is so suitable for Chinese schools.

Educational themes of the show include the importance of nature and protection of the environment. Another important lesson is that people don't necessarily need language to communicate. Instead, if they use your feelings and imagination, they can exchange ideas with strangers no matter which far-away places they may come from. The play breaks down into twelve short segments:

• Jean-marie plays piano before the show starts to make sure the children are focussed.
• A fairytale story is told in Chinese before the show starts
• The show is musically supported by a unique French, hand-made, wooden barrel organ
• The dwarf suddenly makes his entrance
• Tension is running high in the audience because the Dwarf is so alien
• Fortunately, the dwarf turns out to be a friendly little fellow and he is quickly appreciated by his audience
• All kinds of magical things start happening when the dwarf discovers a golden egg
• A big dragon who possesses magical powers turns up unexpectedly
• The children are suspicious at first, but are asked to to interact with the characters on stage
• The dwarf has all sorts of strange experiences
• A surprising finale finishes off the show
• Organ songs and melodies support the festive mood at the end 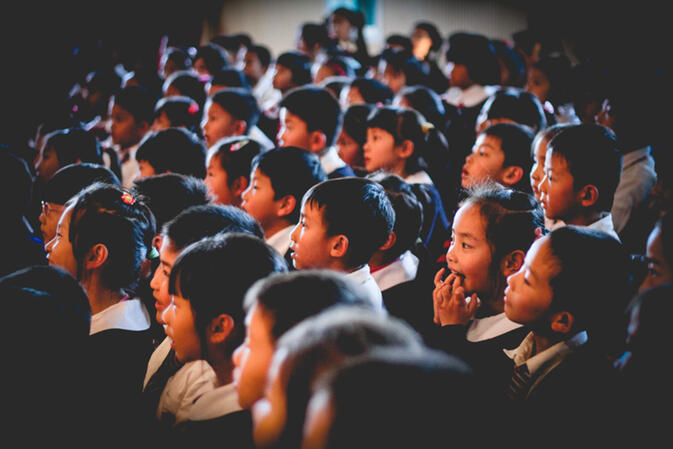 For March 2014, Fratelli Fiasco is rebooked in all of the same kindergartens where performances were held in 2012. However, there are still a few days left in the schedule, so Fratelli Fiasco would like to ask anyone working in education who is interested in staging a show at their school to please get in touch by emailing frankhitman[at]gmail[dot]com.

Please keep in mind the play is most suitable for children of between the ages of five and ten and that open dates are limited. Part of the proceeds raised from the Kunming tour will be put toward a tour of rural areas in Xishuangbanna and the town of Lüchun next year. 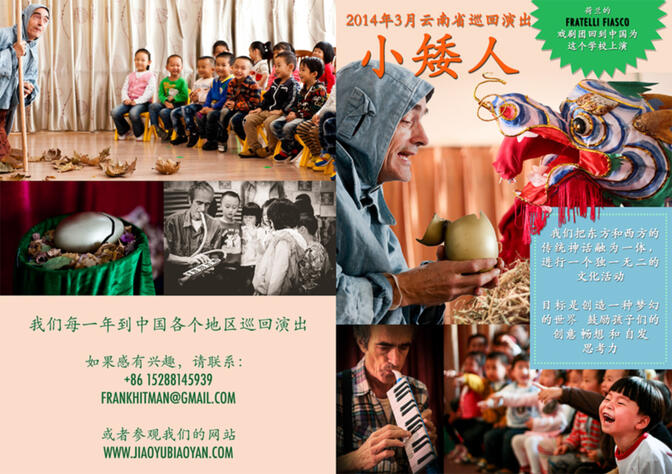