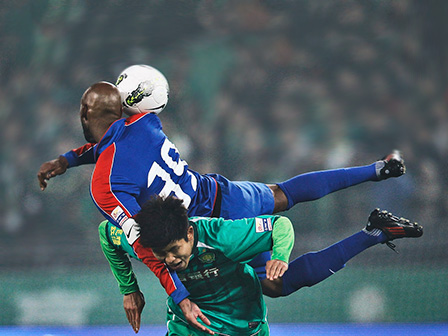 For the past two days, Shanghai newspapers and websites have been publishing stories with frantic headlines concerning the possible departure of one of two premier football teams. Despite several unconfirmed reports and anonymous quotes, no one seems to know for certain if Shanghai Shenhua Football Club (上海申花) will soon relocate to Kunming.

Originally, unnamed team sources told reporters for China-based Soccer News that discussions between the Shanghai club and an as yet unannounced Spring City company had reached a "substantive" agreement. Although terms of the rumored contract remain vague, they appear to center around a seemingly paltry one-time cash infusion of 30 million yuan (US$4.92 million) and a guarantee that the team retains its name. The club would then relocate to Kunming in time for the beginning of the 2014 season.

Since the report first appeared in Soccer News, Shenhua FC's ownership group has remained quiet. Chinese football pundits have not, and the team's majority owner, Zhu Jun (朱骏), has been singled out for criticism. Website Wild East Football (WEF) cited an anonymous source as saying the move is simply a well-worn negotiating ploy:

We have seen this before from Zhu Jun, last time it was a move to Anhui [sic] this time Kunming, I wouldn't say it's totally impossible but it looks like a negotiation tactic straight from Zhu's textbook.

At this time last year Zhu threatened to move his Shanghai team to Anhui for a similar amount of money, but ultimately relented. Writers for WEF believe Zhu is threatening to move the team in order to secure reduced fees for renting a stadium in Shanghai for his team's home games.

Shenhua, which plays in the Chinese Super League, is no stranger to controversy. In 2012 the team stunned the football world when it signed former Chelsea standout Didier Drogba to a two-year contract reportedly worth 1.9 million yuan (US$312,000) per week. Drogba left after only six months amid accusations the team was not paying its foreign players on time.

For its part, Yunnan has not had a major professional sports franchise since the Honghe Running Bulls (云南红河奔牛) were kicked out of the Chinese Basketball Association in 2009. The owner of the team was later put on trial for corruption, misappropriation of funds and embezzlement.

My bet it is Yunnan Baiyao and they relocate to the beautiful park/stadium out in Chenggong!

Read a report today that Shenhua are signing a 4-year contract with a U.S coach called William Gray