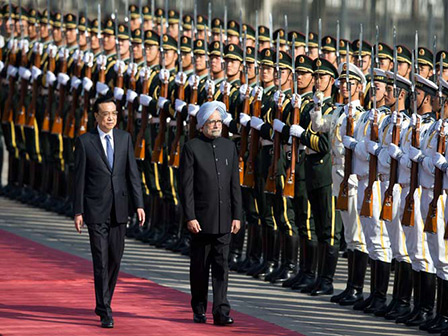 Thursday marked the end of Indian Prime Minister Manmohan Singh's trip to Beijing. He visited the Chinese capital for three days of high-level meetings with Chinese Premier Li Keqiang (李克强) and President Xi Jinping (习近平) that representatives of both governments characterized as "historic".

Leaders from the two countries signed a total of nine agreements, the most important of which concerned border defense. One of Beijing's top priorities, an overland trade corridor connecting India with southwest China's Yunnan province, was broached during the talks, although no substantial progress on the issue has been announced.

Perhaps not wanting to get ahead of themselves, Li and Singh first focused on resolving long-standing border disputes in the Himalaya Mountains. They agreed to increased military ties and signed a resolution wherein both countries pledged they would not resort to the use of force in future quarrels.

Border stability has often been a stumbling point precluding any significant improvement in relations between the two countries. With the issue at least temporarily agreed upon, Singh and his two Chinese counterparts discussed ways to increase trade on more equitable terms.

China currently enjoys a US$66 billion trade surplus with India and Singh's visit was largely predicated on addressing this gap. He pushed for increased access to Chinese markets for Indian goods and signaled more investment from China in impoverished northeast India would be welcome.

During the talks China pressed India on the proposed Bangladesh-China-India-Myanmar (BCIM) economic corridor as a way to increase trade. Different versions of a free trade area connecting Kunming and Kolkata have been floated for more than fifteen years. Discussions have often been stalled or abandoned due to tense Sino-Indian relations. During the talks in Beijing this week, both sides agreed to further dialogue on the corridor in December when delegates from all four participating countries will meet in Kunming.

Beijing has made no secret the nearly 2,000-kilometer BCIM corridor is an integral part of its plan to position Kunming as a regional hub further connecting China to the economies of South and Southeast Asia. Attempting to accelerate talks with India regarding BCIM may also be an effort by Chinese leadership to counter the United Sates' now-fizzling Asia Pivot.

In [a] move that may change the geo-political map in Asia and the world, China and India decided to move ahead with preparation for the BCIM Economic Corridor that compasses Bangladesh, China, India and Myanmar. China expressed readiness to step up investment, railway construction and industrial zone development in the region.

Reactions in India were not quite as enthusiastic and opinions on a trade corridor appear to be divided into two camps. Supporters argue the establishment of BCIM would bring much needed development money to northeast India and increase political stability in the region. Critics of the proposal foresee a logistical nightmare and worry enforcing security across four countries near the Golden Triangle could prove impossible.