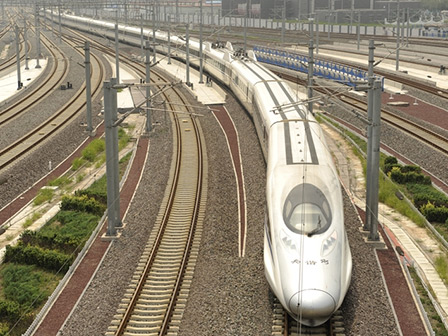 In Yunnan's Fuyuan County workers are in the process of building the province's next monstrous infrastructure project. Originally scheduled for completion by early 2015, the Shanghai-Kunming high-speed railway (沪昆高速铁路) is now expected to go into operation a year late in 2016, according to online media reports.

The 2,066-kilometer electrified line is being built from both directions simultaneously. Laborers on the Yunnan section of track, which stretches 184 kilometers, are currently laying 826-ton, prefabricated girders in eastern Yunnan. While their work is apparently progressing on schedule, unspecified delays, perhaps involving 33 railway tunnels being dug in the hills of Jiangxi, have predicated the year delay.

The Shanghai-Kunming line will connect coastal Shanghai and landlocked Kunming via the provinces of Zhejiang, Jiangxi, Hunan, Guizhou and Yunnan. It will pass through the major cities of Hangzhou, Nanchang, Changsha and Guiyang. The target cruising speed along the line is 300 kilometers per hour with a top speed of 350 kilometers per hour possible under optimal conditions.

Such speeds, however, may never be achieved. Following a 2011 train derailment in Wenzhou that killed 40 people, speed limits along China's railways were lowered 50 kilometers an hour. Nonetheless, when it opens in 2016, the Shanghai-Kunming line will be capable of completing its cross-country course in eight to ten hours — at least 25 hours faster than current train service.

The railway is a dedicated passenger line, meaning it is not designed to carry freight. With significantly shorter travel times between China's east coast and its rapidly developing southwest, the route is expected to compete for travelers' money with air travel. One-way tickets from terminus to terminus are expected to cost between 800 and 1,000 yuan.

The Shanghai-Kunming project is part of an ambitious eight-line, high-speed railway network now under construction in China. Beijing has earmarked 300 billion yuan (US$49 billion) for the entire undertaking, which is expected to be completed by 2020. With the opening date of the Shanghai-Kunming route being pushed back to 2016, it may well go into operation at the same time as the 100,000 square-meter train station in Chenggong.

The way railways go around here, likely it will be 2020 before it will be operational...

Better some than None. China has several fast trains in operation and is expanding quickly. The USA has None.

It would seem to make sense that your new high speed rail line would not open until the new station to serve it and others is ready for service. If memory serves me right the the high speed trains need different gates for boarding than standard trains. The trains board very quickly through numerous gates.

The posh new stations have different gates, but these bullet trains stop at many stations on route, that are not super modern. The trains then stop at regular ungated platforms, however the train stops on a mark, and the passengers are pre-lined up at the appropriate marks on the platforms.

I am glad for the delay. That should mean more time spent constructing the tracks to the standards required, and not just a rush to finish the line asap, with possible associated construction quality issues.