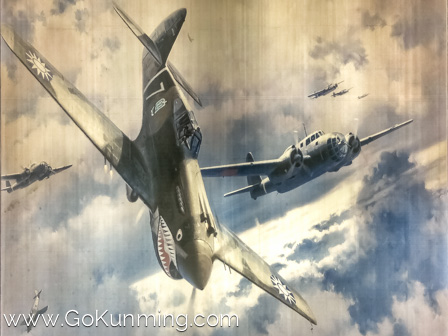 More than seventy years ago the skies above Yunnan were filled with warplanes and anti-aircraft fire. Places once barely known to the outside world began to be featured prominently on the covers of glossy Western magazines. Unpronounceable Chinese mountain passes became the focus of many a general's sleepless nights.

World War II had hundreds, if not thousands, of strategically important cities. For a time, Kunming was a vital one, seen by both Allied and Japanese forces as a key piece in the chess match for western China and South Asia. 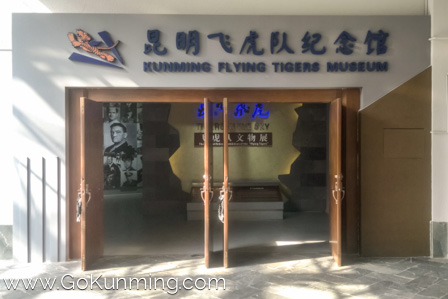 A small but important part of that complex story has found a modest home in Kunming. The Flying Tigers Museum (昆明飞虎队纪念馆) is housed in a wing of the Kunming Museum on Tuodong Lu.

Through a nondescript entrance lies a large entry hall leading to a wide staircase. From the base of the stairs a model of a Curtiss P-40 Warhawk can be seen hanging from the ceiling, backed by giant black and white photos of the Flying Tigers in action. 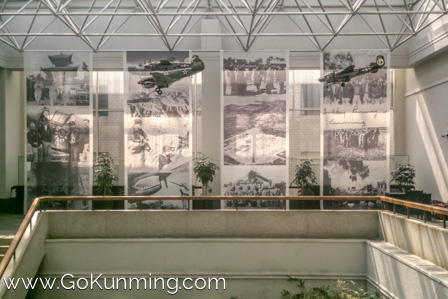 The exhibit's English title is "Tigers in the Sky" and the history of the squadron's origins begins immediately inside the door. Photos of key political and military figures line the walls, accompanied by placards in both Chinese and English that thoroughly explain the story of the Flying Tigers — officially named the First American Volunteer Group (AVG). Although the English descriptions are not grammatically perfect, they are some of the best we have seen in Yunnan.

The museum is not particularly large, but the exhibits contained within do an excellent job of summing up the extremely complex dynamics that were at play in this theater of World War II. The museum display do a good job of explaining the significance of the Burma Road as well as the exploits of the AVG and the role the China National Aviation Corporation had to play. 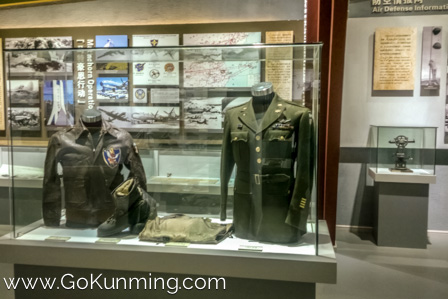 The story is told through dozens of official documents, personal letters from servicemen, contemporary clippings from Chinese and American newspapers, memorabilia and of course photos.

Some of the more interesting documents include original purchase orders for the airplanes that would become such an iconic part of Flying Tigers' lore. Displays also chronicle the importance of the Burma Road and the battle waged for the Huitong Bridge in northwest Yunnan. 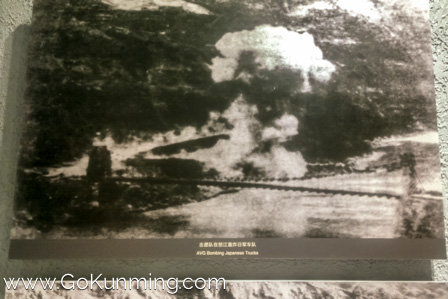 Much is made of the iconography of the Flying Tigers and logos are displayed everywhere in the museum. Upon first seeing the insignia for the Flying Tigers, some people may think it a bit cartoonish. That may have been intentional — the logo was designed, in a wonderfully ironic twist of fate, by vehement anti-communist Walt Disney.

The emblems emblazon many of the leather bomber jackets on display and individual fabric patches also sit behind glass. Interestingly, many of the fatigue jackets in the museum are marked with camels on their backs. Each camel represents one Japanese plane shot down. If the museum displays are dominated by any one person, it is Claire Lee Chennault. The American lieutenant general, who with his craggy face looks straight out of Hollywood central casting, is featured prominently in several photo essays and has a small wing devoted to him.

Chennault was called out of retirement and put in charge of the Flying Tigers in 1941. He was chosen largely because of his preference for air combat over high-altitude bombing campaigns. Under his supervision, the Flying Tigers would shoot down or otherwise officially destroy 297 Japanese planes. In addition to spelling out his military exploits, the museum display focuses heavily on Chennault's marriage to Chen Xiangmei (陈香梅), a reporter covering the Burma Campaign for the Chinese press.

At the tail end of the museum is a small theater that can seat ten. Inside, a flat-screen television shows a black and white documentary on a loop. The film is concerned with the men and women who are not prominently featured elsewhere, the Chinese men who worked with the Flying Tigers, as well as the civilians they were fighting to protect. 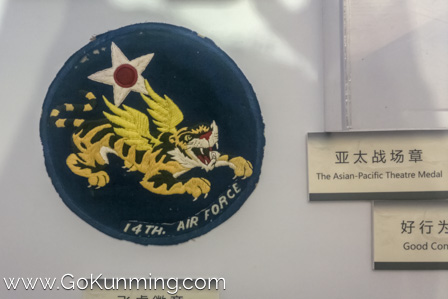 The Flying Tigers Museum is located at 71 Tuodong Lu and is part of the under-renovation Kunming Museum. Walk through the main gate and past a plaza that is currently used as a parking lot. The entrance is marked by a plaque. Went through this museum last spring and was for sure worth spending a couple hours. Very informative.

I visited it months ago and while it is modest, it would nonetheless be a touching visit for Westerners who feel some connection to that period. It's also better designed and curated that many of the museums in the area.

About the ONLY thing that I caught was that one of the curators REALLY slipped up (or, got lazy). There is an unusual color photo of what is described as a WW II American bomber crew hung on the wall. Unfortunately, it is a FAKE...or, and embarrassing error. It's, in fact, a publicity photo from U.S.-made WW II movie, Memphis Belle. (The photo includes a number of actors, including Matthew Modine, Tate Donovan, Eric Stoltz, Sean Astin, Billy Zane, D.B. Sweeney...and others.) Kinda an unfortunate slip-up in what is otherwise a very nice museum installation. Hopefully, the management has discovered it and will fix the problem.

In any case, its worth a couple of hours.

The last time I attempted to go to the Kunming Museum, the whole facility was closed for renovations. Admittedly, that was 2009 and I never bothered to check up on it since. Thanks for reminding me.

Other than the Flying Tigers exhibit, what other exhibits are there in the museum?

I wonder how much a new Curtis P40 was worth??

" original purchase orders for the airplanes that would become such an iconic part of Flying Tigers' lore."

The great thing in the Kunming Museum is the pillar from the Nanzhao Kingdom, which shows clearly that it is much too simple to consider that 'Yunnan' was simply one part of 'China' 1300 years ago.

I saw this museum back in March this year, and thought it was well worth a look through (although it took me a while to locate it first time). I would recommend it to anyone with an interest in wartime history. There's also a Flying Tigers museum in Chongqing. It was a bit smaller, from memory, but also well worth the visit.