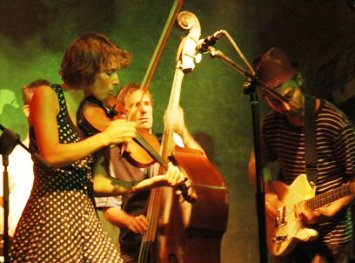 The Cyclown Circus (aka Too Dumb to Die) is back in Kunming after spending the winter in Southeast Asia. Early this afternoon they rolled into Wenhua Xiang, set up on some steps across from The Box and put on a street performance the likes of which most Kunmingers (and local laowai) have never seen in Kunming.

During the winter the bicycle-mounted jazz circus spent time traveling through Laos, Thailand, Vietnam and Malaysia. Some of the troupe decided to push on toward Bali in Indonesia, while three chose to head north and return to Yunnan. The last time they were in Kunming - in early December of last year - the group had just cycled down from Beijing and found receptive audiences for their street performances as well as their show at Speakeasy Bar.

Tomorrow (Sunday) night the Cyclowns will be back at the Speakeasy with a guitar, clarinet and double upright bass - which they amazingly take with them on their bicycles as they ride around Eurasia. The free show starts at 10pm.