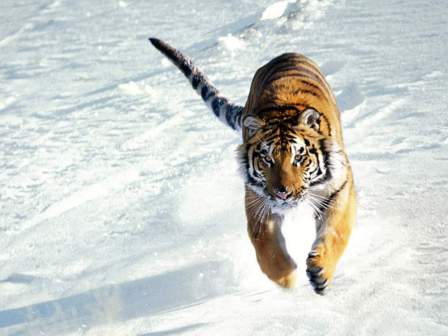 Unbeknownst to many, July 29 was the fourth annual International Tiger Day. In commemoration, representatives from the 13 countries where tigers still exist held a conference in Kunming to discuss protecting the largest cat species on earth.

The meeting, somewhat hilariously named the International Workshop for Transboundary Conservation of Tigers and Other Endangered Species, and the Strategy for Combating Illegal Trade in Wildlife (IWTCTOESSCITW), was attended by representatives from state governments, non-governmental organizations and conservation groups.

A day before the conference began, China and Russia announced the establishment of two "ecological corridors" along their shared border. It is hoped the cross-border areas slated for protection will provide Siberian tigers more freedom to roam while lessening their chances of encountering humans.

The two countries will jointly fund and conduct environmental studies in a effort to find more effective policies regarding tiger conservation. China and Russia also agreed to increased cooperation on anti-poaching efforts and in combating the illegal wildlife trade.

China also came to several agreements with India at the meeting in Kunming. These also hinged predominately on eradicating the smuggling of endangered animals. Both parties agreed to share real-time information gathered by police and border agents concerning illegal animal trafficking.

Wild tigers are estimated to number between 3,000 and 4,000 individuals across Asia. This number is down from roughly 100,000 a century ago, largely due to poaching and habitat loss. Countries working to increase tiger populations have set a goal of doubling current numbers by the year 2022. Conversely, that is the same year the World Wildlife Federation has pegged for tiger extinction if global conservation measures are not drastically increased.

It was perhaps appropriate the symposium was held in Yunnan, as the province has a somewhat blemished track record when it comes to understanding and managing tigers. Just days before the preservation meeting in Kunming convened, news broke that the city's Wild Animals Park was allowing paying customers, including infants, to pet and pose with tiger cubs. This is the same zoo that instituted a 'tiger-fishing' attraction in 2006 and where a boy of four was mauled by a tiger five years ago.

Also in 2008, a six year-old girl was killed by a tiger at the Kunming Zoo while she posed for photographs inside the animal's cage. Violence between humans and tigers, however, is not a one-way street in Yunnan. A man in Xishuangbanna was sentenced to 12 years in prison after he shot and ate an endangered Indochinese tiger in 2010.

One could argue that Yunnans spirit was shot in 2010; the last tiger. There used to be tigers portrayed on the yamens and pailous of Yunnan in old days. Now all left of them are a handful, in shady antique shops. When you arrived from north, you had to pass Jin Ma mountan and under the tiger gate. The tiger in Yunnan can be found in the creation myths of Yunnan, from Naxi to Yi. Its the ancestor of the Dai: the white tiger. You can ride it in the Jade Dragon paradise after suicide too. Its a symbol of Lahu too, and its in the myths among Miao. And theres the tiger festival in Chuxiong. Even, its portrayed in early stone age paintings of Yunnan. The tiger has a deep symbolical meaning for Yunnan, but thats the past. Its allover now, baby blue.

It is very gratifying to know that China and Russia are working together to build a corridor for the tigers and that India is also helping with stopping the smuggling trade of animals -my question to China is -are you going to stop the most horrific treatment of these tigers from which you make -wine from their poor emaciated bodies? -not until China -stops this unbelievable -inhumane treatment - will I -or anyone else will believe China is sincere in it's actions to stop their extinction .-China must bring in protection laws for the animals -all animals -but I can't see that happening -as it's people doesn't have -human- rights laws- to protect -them.