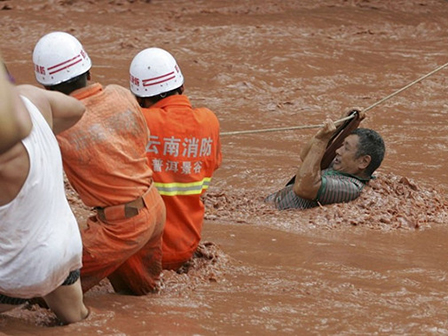 Heavy rains in south and west China are causing floods, death and devastation from Sichuan to Hubei. Over the past week in Yunnan torrential downpours have been blamed for hundreds of millions of yuan in damages and dozens of fatalities.

The Yunnan Department of Water Resources has confirmed at least 31 people in the province have been killed in flash floods, landslides and rain-related accidents. Two people are still missing. Nearly every major city and county in Yunnan has reported damages from flooding in the past seven days.

Government reports indicate that almost one million people have been directly affected by rains and accompanying floods. Many of those impacted by torrential downpours have seen their farmland washed away in floods or buried by mudslides. Some 480,000 others are suffering from a lack of potable drinking water.

Of the 31 reported deaths, eight of them occurred in Xishuangbanna when a bus drove off the road and down a forested mountainside. The accident is being attributed to the bus hydroplaning on rain-soaked asphalt. Several passengers were rescued after the wreck and 19 were transported to a nearby hospital with injuries.

Weather stations in 35 areas across Yunnan have reported June and July rainfall levels above historical averages. Areas of Baoshan (保山), in the province's far west, have received the most rain of anywhere in Yunnan. In the month of June alone, the village of Longling (龙陵) in Baoshan has seen more than 300 millimeters of rain.

Storms generating this much precipitation are both a blessing and a curse in Yunnan. Despite serious flooding and its attendant difficulties, provincial water management authorities are hopeful recent rains will help to replenish water tables and reservoirs.

Both natural and manmade water storage facilities have repeatedly been drained during the province's four-year drought. Officials have expressed hope reservoirs will hold a total of 7.6 billion cubic meters of useable water by the end of this year's rainy season. That figure is equivalent to the yearly freshwater use for the country of Cuba.

So its probably not a good time to bike the Nujiang? Most likely a lot of slips and dangerous roads...

not the nujiang nor the tiger leaping gorge or any other canyon are safe around this time. massive boulders coming down.

You do wonder how much people here actually learn from experience. I know the climate is usually dry, but the rains are annual. Yet, when it suddenly started raining during my bike trip coming down Changchongshan, we saw three accidents, including a minivan on its head.

Loving the rain so far. This year is how it use to be 4 years ago.

Here's a video of the flood v.youku.com/v_show/id_XNTgxNDkyMDQ4.html?x
Some bits are hard to watch

I forgot to add Sichuan

Any ideas why there is a drought ?

Not sure if the question is serious, but here is a serious attempt at an answer.

In the last month or so we have had a lot of rain over a prolonger period, and it has helped a lot. But there has been a 4 year deficit of rainfall vs water use. This has depleted water stocks.

Water stocks consist of rivers and lakes, reservoirs, and most importantly ground water. To replenish the stocks there needs to be rain over a prolonged period. Long periods of consistent light rain are far better at replenishing water sources than heavy rain over short periods.

Shorter periods of heavy rain increase surface water. In urban areas, the concrete buildings and roads prevent the rain water from going into the ground and you get floods and most of this runs off into water courses.
In non-urban areas the surface water can run over the ground with only a small percentage actually soaking in. There is also run off to water courses, flash floods etc.
Water courses, including rivers and many shallow lakes don't really store the extra water, it just runs through.
Where there are deeper lakes and reservoirs water is stored, but this is only a small part of the water reserves.
It takes time for water to permeate the deep ground to replenish aquifers.

Not a perfect answer, I know.

Not a bad answer either, tiger tiger