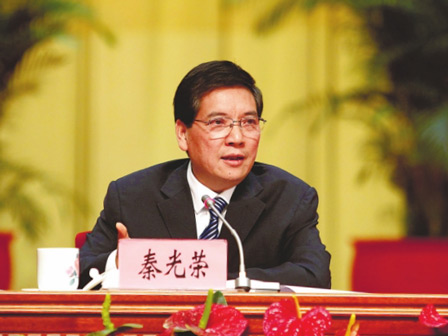 News outlet iFeng was recently granted an interview with Qin Guangrong (秦光荣), who has been Yunnan Party Secretary since 2011. The conversation, perhaps unsurprisingly, focused on the province's continuing struggles to manage its water resources. It also touched on the future of Dianchi Lake, Yunnan's slow but steady infrastructure upgrades as well as trade with neighboring countries.

The following is a short recap of comments and observations made by Qin during the 25-minute interview. It is a rare opportunity to hear an official at the highest levels discuss some of the pressing issues facing the province and its 46 million inhabitants. 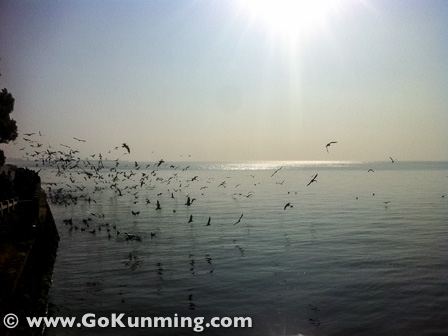 Qin quoted several statistics highlighting the amount of money that has been spent to clean up the lake. This includes spending an estimated 17 billion yuan (US$2.75 billion) on water infrastructure projects over the next decade.

In addition to discussing plans to build thousands of water strorage cisterns in rural areas, Qin commented on seldom-discussed strategies to clean up Yunnan's largest lake. Qin said the goal was to return Dianchi to its original condition. Beginning in the 1980s, serious pollution ruined lake water for even industrial use. Provincial and national authorities have spent billions of yuan and the better part of a decade trying to restore it.

Qin outlined a general strategy for rehabilitating the lake. The first step, he said, is to ensure that no one is currently drinking water from the lake. The second is to continue clean-up efforts on the dozens of rivers and streams emptying into the lake, many of which are still fouled by raw sewage. Qin mentioned the new sewage treatment plants being built around the lake but also outlined a huge water diversion strategy. 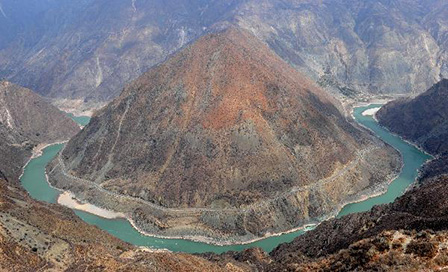 A bend on the Jinsha River in northwestern Yunnan

According to Qin, due to both the drought and current redirection practices designed to keep dirty water from entering Dianchi, the lake has become stagnant. To get water moving both into and out of the lake, Qin said water from the Jinsha River (金沙江) will be diverted from an area near Benzilan (奔子栏) northwest of Deqin (德钦).

Water will be rerouted 1,000 kilometers southeast to central Yunnan, eventually joining up with the Niulan River (牛栏江). Qin described a plan expected to replenish many of the reservoirs most vital to Kunming and its surrounding cities. The diverted water is also expected, over time, to flush stagnant water out of Dianchi. The water diversion project has yet to receive national approval but Qin said he expects permission to be granted and funds procured by October 1 of this year.

Qin was quick to say that although planners hope to return Dianchi's water to potable status by 2020 he would not be surprised if efforts took ten to thirteen years.

Regarding the objectives of Yunnan's "Bridgehead Strategy"

The ultimate goal is to spur economic development for residents of the province, according to Qin. Almost as important is transforming Yunnan in general, and Kunming specifically, into one of the largest trade hubs in China.

Qin explained that Kunming will one day rank behind only Beijing, Shanghai and Guangzhou in terms of imports and exports. He also said he sees the province once again becoming a net energy exporter, sending electricity from hydroelectric dams to other Chinese cities as well as Southeast Asia. Referencing the Sino-Burmese oil and gas pipeline, Qin said he envisions Yunnan soon exporting large amounts of refined oil to Laos, Vietnam and Thailand. 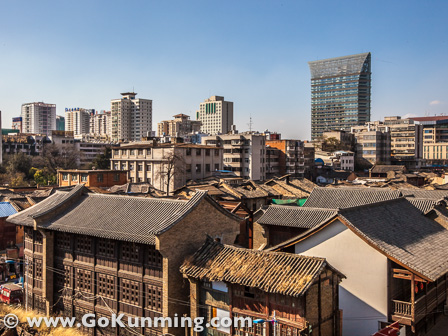 Qin also spoke about the Spring City and what he sees as the most pressing concerns facing the city. Many of his comments centered around quality of life issues.

Kunming's ever-worsening traffic problems was the first issue the Secretary addressed. Qin went on to say chengshibing (城市病) — a Chinese watchword encompassing social problems such as overcrowding, water and air pollution and housing inadequacies — must be dealt with in the near term, although he offered no concrete plans.

Finally, Qin ranked "beautifying the city" as equally important to raising people out of poverty. Limiting urban sprawl and once again making Dianchi Lake a tourist destination were two ways he suggested for fashioning Kunming into a more comfortable place to live.

Looking on google maps... that looks like one HELL of a water diversion. I don't get it though, will they pipe the water in? Dianchi is in a basin, as I understand it, with the catchment area of the rivers flowing into Dianchi only being within said basin which includes Kunming city and up into Jindian in the NE and similarly in the NW. Does this mean the water will have to be either taken over or through the mountains to get here (both must be via a pipeline)? Correct me if my understanding is incorrect, this seems pretty hardcore!

Isn't that the toiletbowl-flushing method that this article describes?

They just keep on finding ways to challenge nature more instead of realizing that it is in principle the whole fight against nature that is causing all the problems. I see a very sad future for Yunnan with this kind of statements. I'm curious if he mentioned the importance of maintaining/recreating biodiversity at all. For this should be the main way to handle the drought. It's just not an instant way, it's reversing their whole way of thinking.

This diversion will take an enormous amount of energy to divert water to Dianchi; let alone the energy to build this monster of a project.

The water going to hundreds of reservoirs makes sense but Dianchi??

Flengs has it right, you cant "control" nature.

Of course you can theoretically control nature, it's just a matter of technological and engineering capabilities. It's an open question to what extent humanity at present has these capabilities, sure, but China is indeed trying very hard. Viewed form another perspective: historically, the chinese civilisation has always been nature's bitch, subject to earthquakes, floods and other ravagings that, at least in art and religion, gave rise to an idea where humanity is essentially a victim of nature. Hence all the ancient chinese paintings with a small human figure in the midst of an enormous natural landscape and so forth; this is in stark contrast to european art history, where man is in the forefront and nature the background. I won't speculate as to what extent this ideas might have shaped the development of China visavis the West, but the chinese government nowadays does seem to be pursuing some kind of wierd revenge...

Well, Natsymir, I think the whole thing you wrote made sense, except for the first sentence.

There is no theory that allows technological and engineering capabilities to control nature. That's the big illusion that feeds all the problems. It implies that we understand nature fully and rise above it. Nature is much to complex to do this. This is why so many people seek refuge with a big bearded white guy somewhere sitting on the clouds. And in case of the Chinese, in my opinion, they are defying everything in a kind of adolescence arrogance, and I'm pretty sure it'll come back to haunt them later. I guess they are in dire need of some animist missionaries...

There's no telling what humans may or may not one day be able to understand; science this far has been ever-progressing. I'm not saying nature isn't to be respected, but it seems almost religious to me to claim that nature is some eternal mystery that's inherent impossible to understand or master. With sufficient technology and scientific understanding, it simply -has- to be possible to control nature, to a measure; I just leave it an open question whether 'sufficient' in this case would mean 'god-like, scifi, off-the-kardashev-scale-level', or simply 'current human capabilities'.

Yes, it's impossible to master, as long as science is "ever-progressing" and we can only understand the complexities of nature "to a certain extent", any attempt to tame it on a large scale (like this idea to flush the Dianchi lake or dam the Nujiang) is a dangerous experiment of blind belief in science. And then yes, I'd prefer nature spirit religion to a religious belief in science and human capabilities, as we all know how incredibly selfish and shallow humans can get. The problem that is causing all those environmental problems is people disrespecting nature and it is sad that they will only try to challenge it further in their blind belief in their own ever-progressing capabilities instead of listening to their surroundings. I would find it pretty hard not to agree with this, if you look around you in Yunnan, it's so obvious.

Right, seeing how they throw trash on every piece of land (take a walk at university garden to see future prospects), makes me think they are not from this planet as they not even respect the land they were born in.

But westerners are kind of same.

I have no clear idea about water project but i am afraid it will attract bad luck to steal water from kham holy places.