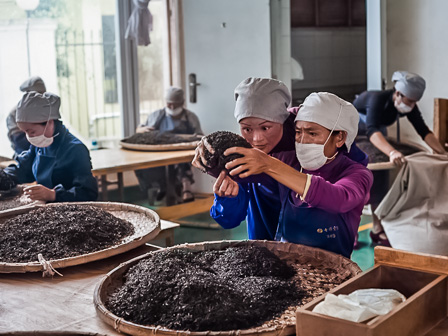 Editor's note: Georgia Freedman is a freelance food and travel writer — and former resident of Kunming — who chronicles her adventures traveling and cooking in Yunnan at ChinaSouthoftheClouds. Before moving to Kunming, Georgia was the managing editor of the American food magazine Saveur. She now contributes to Saveur, The Wall Street Journal, Imbibe, The Art of Eating and other publications.

It is often funny what happens when foreigners show up in the rural areas of Yunnan. Much of the time they are simply ignored or treated like someone whose sole purpose in life is to walk around hearing "Hello" from every child within a ten-kilometer radius.

However, every once in a while, some low-level government official gets their hands on a foreigner and decides that they must be important and, furthermore, must have the power to make the official's town or business popular with everyone in the outside world.

Such was the case during our most recent trip to pu'er tea country in Xishuangbanna. On the last day of our trip, we met up with a man who ran a tea plantation which was owned by a friend of a friend from Beijing. We had mentioned we were interested in tea and would love to see how he grew and processed pu'er tea — which is often alternatively spelled pu-erh. He invited another friend — a nice businessman who just happened to be one of the region's chief government economists — to join us.

Before we knew what was happening, we were dressed in hairnets, lab coats, and blue plastic shoe-covers. Thus clothed, we were given a personal tour of one of the biggest pu'er tea factories in China.

While the best pu'er is produced by small-scale growers the vast majority is made in much more prosaic, industrial surroundings. The pu'er-making process we saw at the factory involved the same steps we had seen when visiting smaller scale producers, but carried out in a much more regimented, high-tech fashion. 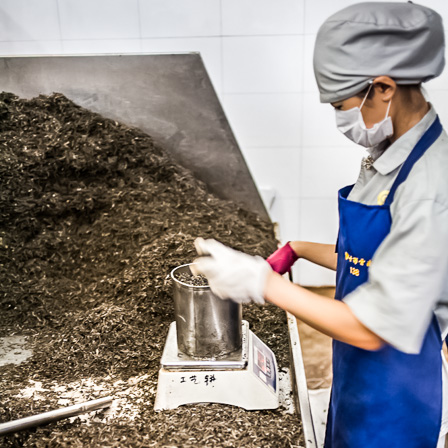 First we visited a room where the cooked tea was formed into its iconic cakes. The tea was portioned out on a scale, so each cake would be exactly the same size. 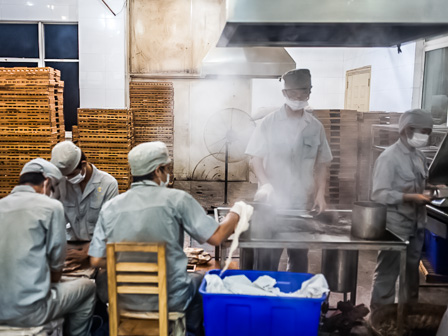 Each batch of tea was steamed briefly. This technique is a relatively new addition to the process of making pu'er. It oxidizes the tea so that it instantly develops the kinds of rich flavors that would normally take years of aging to achieve. However, it's fairly easy to tell that tea 'aged' this way does not taste nearly as good as the real thing. 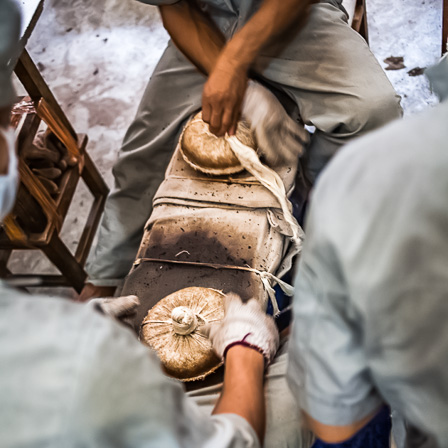 The just-steamed tea is then tied into cloth bags. This is one of many processes that, despite taking place in a factory, are still done by hand. 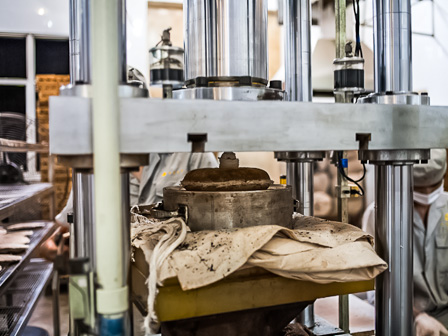 The bagged tea is still quite loose and malleable. While in the bags, it is pressed into round cakes with a dimple in the center (with the help of some heavy machinery). 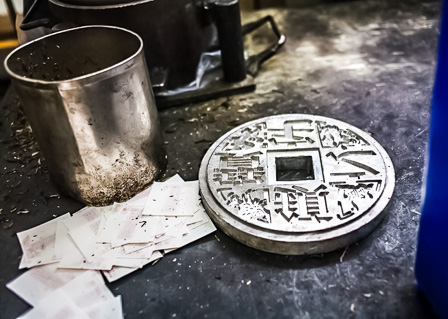 Often it is pressed with a metal die. This gives the cake its characteristic stamped insignia, which is unique to each tea company. 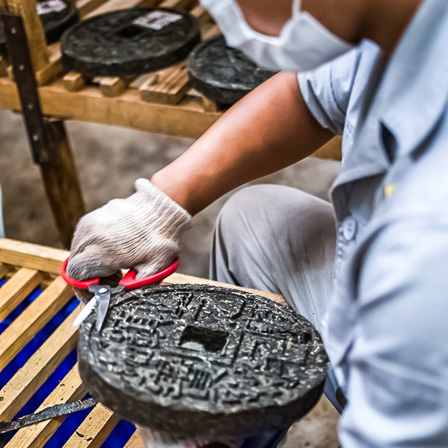 Cakes are often embossed with good wishes. The worker above is trimming off excess tea that slipped over the side of the die during stamping. 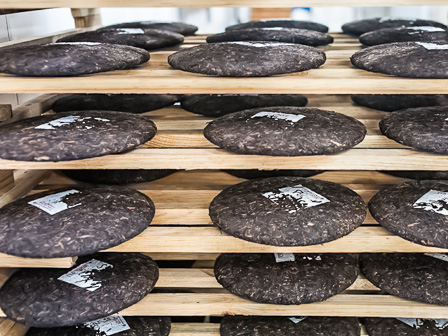 The finished cakes are dried on wooden racks. They are then dated and wrapped in thin paper. Once dry, the cakes are bundled into packages containing seven cakes each and are ready to be sold to distributors. A group of seven cakes is called a tong (筒). After we had seen the industrial part of the tea-making process, we were shown into a room where the most intricate, hands-on work was done — the tea sorting room. 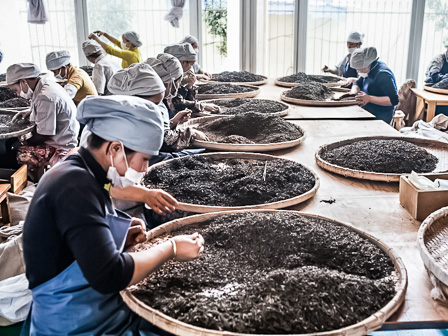 There, dozens of Dai minority women in aprons, hats, and paper masks sort the tea that will eventually be processed into cakes. They comb through kilograms of leaves, one basket at a time, to separate the longer, more valuable leaves from the shorter ones. Another woman checks their work by lifting handfuls of tea into the air and letting the leaves fall slowly back onto the basket, looking at the uniformity of the leaves as they fall. The work is mind-bogglingly intricate. It is a testament to Chinese tea culture that even in a factory, exacting, hands-on examination is a requirement. Finally, we were shown into the factory offices, where we were given tea to taste and a handful of brochures (all in Chinese) about the company's history and corporate philosophy. In an adjacent room, we found a tea taster doing quality inspections. Not a bad job, if you ask us.

I agree. Most interesting. We see the tea cakes everywhere, but have no idea — or not much of one — about how they are produced. I'd like to see a follow-up article to this, however, about different types of tea and how puer was developed and why and how it compares.

My second wife, self described tea expert, says pu'er tea was developed by the Brits. The tea was formed into cakes for the long trip to England. The fermenting occurred by accident but the tea was washed and sold anyway. It turned out to be improved by the process.

I've asked and tried to confirm this with no success. There is a lot of tea lore around but almost nothing about the origins of pu'er cha. Sometimes pu'er cha is called 'red tea' but there is, locally, a red tea which is not exactly p'er tea, and quite expensive. Locals seem to refer to fermented pu'er as 'black' tea. For a time, I thought the difference was between Yunnanese people and folks from the north and east, then I bought some 'red' tea in Banna. It is different and quite nice. Also different is the tea sold by Dai and Ahaka people.

This article is excellent. Follow-up articles on local tea products/indutry would be great.

I love to visit such places and get detailed information and have a look how they work and their system of processing.