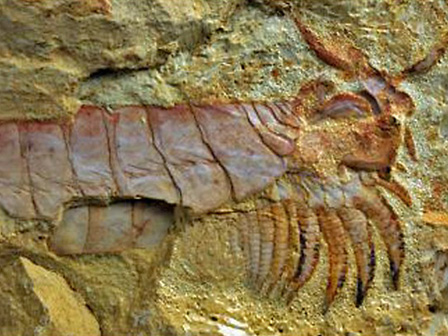 Yunnan's fossil treasure trove has once again provided paleontologists with an insight into how life evolved hundreds of millions of years ago. Researchers from the University of Cambridge and Yunnan University have unearthed fossils containing the earliest examples of an organism using manipulative limbs to feed itself. Their research was published last week in the international journal Nature.

The scientists have, for the first time, examined the heads of two species from the taxonomic order Fuxianhuiida — extinct arthropods that lived more than half a billion years ago. What makes the fossils of Chengjiangocaris kunmingensis and Fuxianhuia xiaoshibaensis noteworthy is that they are the oldest known examples of a nervous system extending beyond the head of an organism.

The two Fuxianhuiida specimens are better-preserved than those studied previously. Researchers were able to identify the purpose of "limbs" located under the creatures' heads. Previously thought to be a form of antenna, the limbs are now understood to have been used to scoop up food from the ocean floor — science's earliest identification of such a behavior.

This evolutionary trait may go a long way toward settling the "arthropod head problem" — a complicated scientific argument concerning how the heads of today's insect, spider and crustacean species evolved.

Although the report in Nature may seem to be concerned with an esoteric discovery, it is one with huge implications for paleontologists trying to explain how life on earth evolved. The two species in question lived during the Cambrian explosion, which was characterized by the rapid appearance and diversification of complex organisms.

This epoch of animal evolution is not particularly well-understood by scientists, especially concerning the early development of a central nervous system. As Cambridge researcher Javier Ortega-Hernández, co-author of the findings, explained to website redOrbit:

These fossils are our best window to see the most primitive state of animals as we know them...Before that there is no clear indication in the fossil record of whether something was an animal or a plant — we are still filling in the details, of which this is an important one.

Both specimens were uncovered on Yu'an mountain in northwest Kunming. The soft-bodied creatures were found in a mixture of siltstone and shale.

Important fossil discoveries are nothing new in Yunnan. In the past two years paleontologists have uncovered a species of "walking cactus", a 250 million-year-old extinct species of crocodile previously unknown to science and a possible missing link in the evolution of humans.

I had the chance to visit the Maotianshan fossil museum outside of Chengjiang, north of Fuxian Lake to the southeast of Kunming recently. That is the main site nearby and was really impressive, though to be fair one has to be in a sort of 'wide-angle mindset' to appreciate the contents. I'll share some information about Chengjiang in the future.