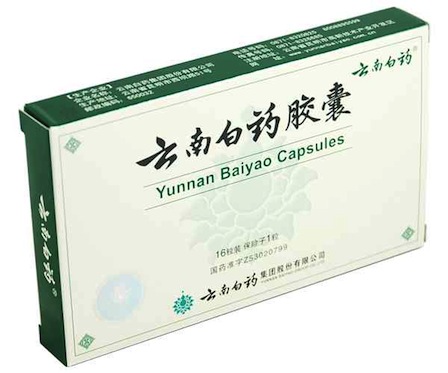 Pharmaceutical giant Yunnan Baiyao Group has run afoul of officials in Sichuan Province. Capsules and pills of the company's eponymous drug were found by the Sichuan Food and Drug Administration (SCFDA) to contain elevated levels of water and have since been outlawed.

Tests conducted by the SCFDA found that packaging of Yunnan Baiyao (云南白药 or Yunnan white medicine) pills and capsules was faulty and that defective seals led to water contamination. In addition to rendering the medicine ineffective, the tested products were found to be tainted with mold.

Sichuan authorities have now prohibited the sale of Yunnan Baiyao pills in hospitals and pharmacies across the province. Officials have also ordered a complete product recall of the pills. National media are referring to the disclosure as a scandal and have dubbed the situation "Quality Gate" (质量门).

Aerosol and other products manufactured by the Yunnan Baiyao Group have not been found to be contaminated. As of this writing Yunnan public health officials have not issued a similar ban.

Yunnan Baiyao was invented in 1902 by herbalist Qu Huanzhang (曲焕章) as a powder for use in the treatment of injuries and as a blood coagulant. Today it can be bought in pill, aerosol and tincture formulations and is recommended by producers for treatment of everything from colds and flus to use in 'trauma' situations.

The ingredients of Yunnan Baiyao had been a closely guarded trade secret, much like the confidential recipe for Coca-Cola, until three years ago. In 2010 both Amazon.com and the United States Food and Drug Administration published a list of the eight purported active ingredients found in the medicine Beijing has referred to as a "national level confidential product."

Although the ban in Sichuan is certainly bad publicity for one of Yunnan's most well-known exports, it may not affect the company very seriously. Recent growth of the Yunnan Baiyao corporation has largely been fueled by sales of its toothpaste and aerosol sprays. Those two products accounted for reported gross revenue of 2.6 billion yuan (US$418 million) in 2012.