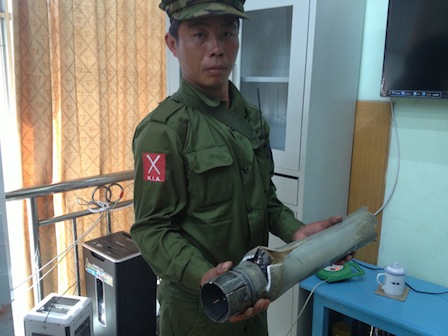 Fighting in Myanmar's Kachin state has intensified since December 25. At that time, the Kachin Independence Army (KIA) and negotiators from Myanmar's government failed to reach a compromise regarding humanitarian supply convoys.

For more than a week after talks broke down, the Burmese military has been shelling KIA positions. It has also deployed helicopter gunships and planes over Laiza — a town on the Sino-Burmese border.

The three explosives, presumably destined for KIA installations near Laiza, instead fell into the Chinese village of Nabang (那邦) on December 29. Windows were shattered in several buildings and a gas station was damaged. No casualties were reported.

There have also been accusations that fighter jets from Myanmar illegally entered airspace over China. The Chinese air force denied any such violation in a statement released over the weekend. 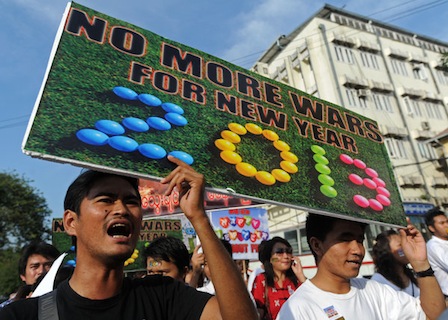 Protesters in Myanmar rallying against intensified fighting in Kachin state

Reports from both Chinese and Burmese sources are vague and have been slow to be issued. It is unclear if the explosives were dropped from planes or launched from artillery batteries inside Myanmar. Regardless of the delivery methods, a spokeswoman for the Chinese Foreign Ministry, Hua Chunying, released a statement reading in part that "the Chinese side demands the Myanmar side immediately take effective measures to prevent similar incidents from happening again."

Kachin rebels have been fighting the Burmese government since 2011. A 17-year truce between the two sides had been in place but was violated by both groups as Kachin rebels sought more autonomy from the government of president Thein Sein.

A spokeswoman for United Nations Secretary General Ban Ki-moon called for an end to the fighting. She also warned against targeting non-combatants, saying Burmese military leaders should "desist from any action that could endanger the lives of civilians living in the area or further intensify the conflict in the region."

In March of last year, Yunnan hosted peace talks between the two sides which were ultimately unsuccessful. The talks commenced after thousands of refugees from Myanmar crossed the border into China seeking sanctuary from renewed fighting.