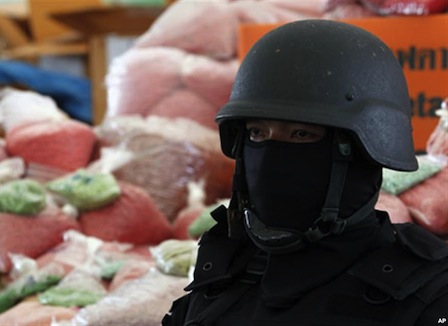 A police officer guards a stash of confiscated drugs

Representatives from China and the Kingdom of Cambodia met New Year's Eve in Kunming to discuss details of a bilateral law enforcement agreement. The accord focuses mainly on international drug interdiction but also touches on increased cooperation combating terrorism and fraud, Bernama is reporting.

Hu Shuiwang (胡水旺), Deputy director of Yunnan's Public Security Bureau (PSB), met with You Sunlong, head of Cambodian National Authority for Combating Drugs. The two agreed to a group of measures designed to limit the flow of drugs, especially by air, between Cambodia and Yunnan.

In a separate agreement possibly connected to drug-interdiction, Cambodia recently secured shipment of 12 Chinese-made Z-9 helicopters. The civilian helicopters are built in Harbin. They can be retrofitted with military hardware and used for law enforcement.

Cambodia's relationship with China is often overshadowed in the media by those of other Southeast Asian countries such as Vietnam and Myanmar. Nevertheless, Sino-Cambodian ties remain close and the Yunnan government is often tasked with maintaining and strengthening relations.

Improved transport links have boosted commercial exchanges between Yunnan and its Southeast Asian neighbors, but have also made stemming the flow of drugs across borders more difficult. This new collaboration comes just four days before Kunming and the Cambodian city of Siem Reap are connected by direct daily flights.

Yunnan is a major corridor for narcotics trafficking from Southeast Asia to China. In late December 2012, a Chinese man surnamed Kui was sentenced to death in Cambodia for attempting to transport eight kilograms of an undisclosed drug into China. In February of last year another Chinese national was arrested outside of Phnom Penh with 120,000 tablets of methamphetamine worth an estimated one million US dollars.