Getting Away: Hongtudi Scenic Area 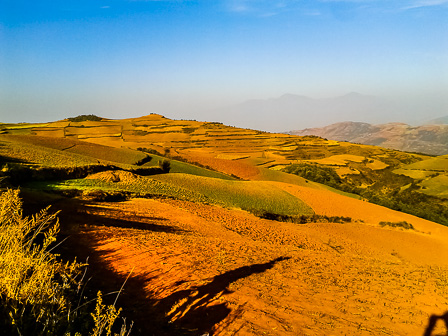 Editor's note: GoKunming recently cycled from Dongchuan to the confluence of the Xiaojiang (小江) and Yangtze (长江) rivers. This article is the first in a series of four about travelling in northeastern Yunnan.

The plan was to meet up in Dongchuan. Everyone on the trip had different schedules, so four of us ended up leaving on three separate buses. Li Chen, the fifth member of our group, sensibly went ahead by car.

Upon leaving the city's north bus station we all ran directly into a signature Kunming traffic jam. Two of the bus drivers elected to take detours while the third decided to wait out the traffic.

Dongchuan is 180 kilometers north of Kunming and the bus, which used to take four hours, now takes about two and a half. For the buses on detours, the trip lasted four hours. The one caught in traffic took seven and did not get into Dongchuan until after midnight. 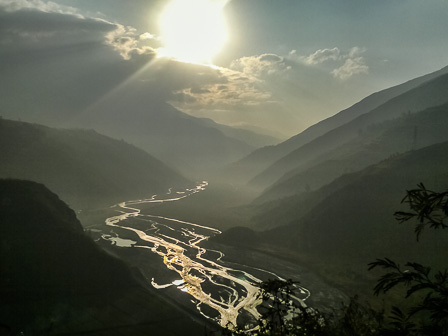 Sunrise over the Kuai River (块河)

Li Chen was eager to show us around his hometown and took the three of us who had arrived to dinner at Crazy Chicken, an outdoor shaokao restaurant. Over dinner we agreed to set out at seven the next morning.

The cold dawn was a bit bracing as we rode our bikes to a noodle shop for breakfast. At the shop we were introduced to what is now our favorite early morning snack, potato baba, a deep fried pancake flavored with crushed red pepper.

We finished breakfast and set out, riding south. The road was in good condition and relatively free from traffic. We cycled up a gradual slope out of Dongchuan before reaching a long and arrow-straight bridge. 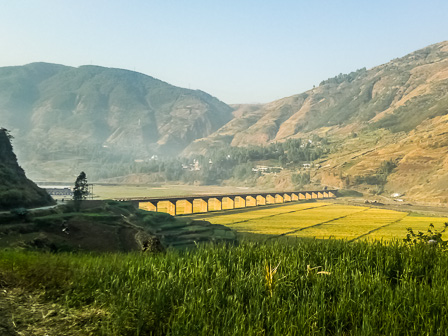 It crossed the Kuai River (块河) and was obviously built for wetter times. We were riding in the dry season and the river was barely a trickle. Its floodplain shimmered with yet unripe winter wheat.

After crossing the bridge the road began to meander up into the mountains. The side of the valley we were riding through was alternately forest or terraced for farming. As we rode, the exposed earth in the fields began to slowly change from a light tan color to a rusty red. 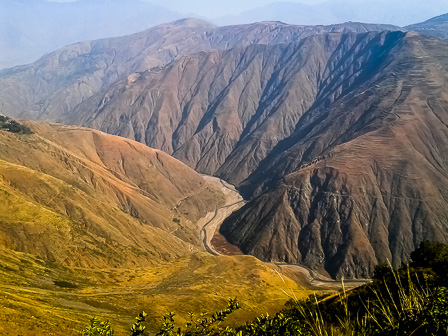 We crested a hill and stopped to take photos of the steeply sloping mountains in front of us. The road would soon take us to the Hongtudi Scenic Area (红土地风景区) that is famed for its terraces and checkerboard fields.

What we were seeing was not pretty at all. The mountains were almost completely denuded. Only small clumps of vegetation clung to bare slopes. Here and there terraces had been cleared where the grade would allow, but otherwise the mountains were devoid of anything. 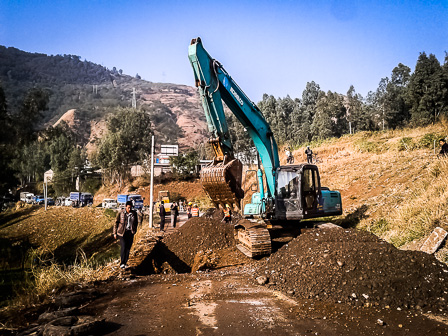 Rounding a corner we ran into the first and only construction we would see on the entire trip. It was a small affair, with one front end loader clearing a section of road only about 20 meters long. We picked up our bikes and ran along a steep hill to get past the roadblock.

Back in the saddle we continued climbing and the dirt in the fields kept turning a darker red. We passed a reservoir and then entered Hongtudi. The land there is rich in iron, which through oxidation tints the ground a red that contrasts spectacularly with the different crops farmers grow. 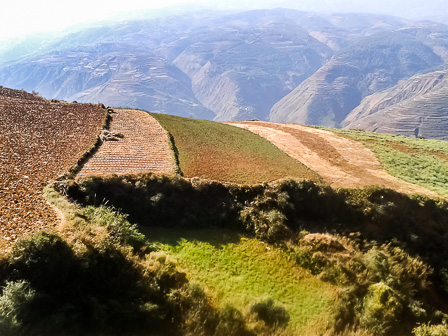 Despite the fantastic scenery, the soil in Hongtudi is relatively poor for farming. This is largely due to over-cultivation and deforestation on a massive scale. Erosion is a constant and growing problem in the area.

Perhaps in an effort to promote plant growth, dozens of apiaries lined the road. We occasionally found ourselves cycling through swarms of honeybees. Other than honey farmers, the roads were empty of traffic save for the rare dump truck lumbering up the mountain. Much more common were people plodding patiently up or down the road carrying huge bundles of hay or corn husks.

The poor quality of the soil notwithstanding, farming is the vocation in and around Dongchuan. We rode through seemingly endless terraces of wheat, barley, buckwheat and root vegetables. Some of the mountains appeared to be tilled from top to bottom and small villages sat perched on the edge of sheer cliffs. 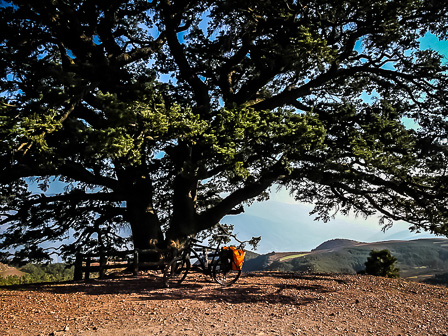 At the top of a wind-swept hill we stopped to help two completely unharmed teenagers turn over a van they had somehow flipped into a ditch. After this bit of kindly service we noticed a completely incongruous sight. A huge fir tree was growing by the edge of a fantastic cliff.

It was the only tree of any size in sight and we cycled over to investigate. A stone marker, scratched and defaced almost to the point of illegibility, informed us the tree was several hundred years old and held the spirit and aura of the mountains. It looked like a lonely job.

The sun had started to sink toward the horizon and we stopped in the tiny town of Huagoucun (花沟村) where drying tobacco leaves were draped over every available surface. We contemplated whether to stop for the night or continue riding. We decided to press on to our original destination of Fazhe (法者). The final 20 kilometers of the day were a race against the coming dark and we rolled into town just as stars began to appear in the sky. 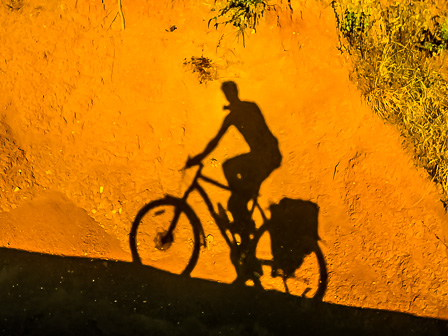 Luckily Li Chen had been to Fazhe before and found a clean hotel charging only 40 yuan for a double room. The temperature had dropped considerably since nightfall and the hotel showers were blissfully hot, although the water pressure was only a trickle. You can't have everything.

We ended the day at a Hui restaurant where we destroyed eight dishes of wonderful food. All told we had ridden 65 kilometers. Mapping technology is a bit unreliable in rural China but it appears we climbed roughly 2,000 meters and gained 1,200 meters of elevation. It was a good and tiring ride, and one that subtly revealed much about recent Chinese history. 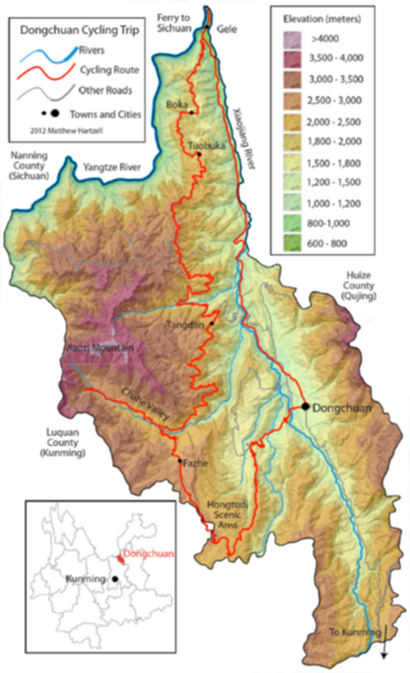 this is an outstanding place to visit especially in late spring. There is an uncanny solitude and quietness and the scenery is spectacular. The local food with its mix of fresh wild greens is worth sampling.

Haha there's a bridge over the River Kuai :D

Looks like a good ride. What software program did you use to produce that map?