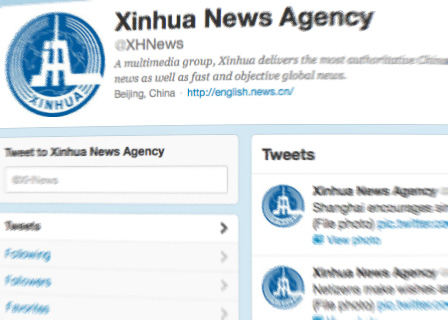 Although not particularly surprising — Xinhua also maintains an international English news website and apparently its own YouTube channel (requires proxy) — the disclosure has caused an internet backlash. Chinese netizens have taken to microblogging site Weibo and are expressing their confusion and anger largely through sarcasm over what they consider to be a blatant double standard.

Many online posters have taken an ironic tone and threatened to report Xinhua to the proper authorities. One person inquired on Xinhua's official Weibo account how he too might bypass China's internet rules. "How do I break the firewall?" he asked.

The US-based social media platform Twitter currently has more than 500 million users worldwide. It is blocked in China along with other popular websites such as Facebook and YouTube. Chinese refer to internet restrictions that bar specific websites such as Twitter as 'The Great Firewall' (防火墙).

Xinhua's Twitter account was established in February of this year and has 'tweeted' roughly 3,000 times since its inception. Yesterday the account had 5,000 followers but has since gained 2,000 more.

It is currently following no one. In October Xinhua's account was following nearly 400 people but has since slowly phased all of them out, according to the newspaper report.

It appears Chinese internet users were largely unaware of the account until reading the Yunnan Information Daily report. As of this writing, the article is still live on the newspaper's website and has been forwarded on Weibo 6,000 times. Xinhua has issued no official response.

Partick, CCTV America has Facebook pages and openly tells you to go there in the English 24 hour news broadcasts in China on Channel 68.

As of 4 pm Thursday, China time, the YN INformation Daily article is no longer available. Instead there's this message: 您查看信息不存在或已删除,两秒后返回乐云网首页！(The page you're looking for doesn't exist or has been deleted; you'll be redirected to the main page immediately.) ....Those hypocritical bastards.