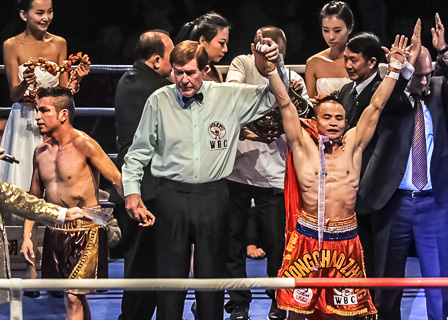 The bout began with Xiong as the aggressor, perhaps buoyed by the partisan crowd. Martinez repeatedly deflected punches and then dropped his guard to taunt Xiong. The two boxers fought with completely different styles — Xiong was compact, guarded and relied on jabs, while Martinez was open, aggressive and threw overhand haymakers from both sides.

In the second and third rounds Xiong's patience was rewarded when he stunned Martinez on three separate occasions and opened a cut above the Mexican's left eye. The first half of the match was fought at close quarters and despite getting cut, Martinez was able to relentlessly stalk Xiong and land several solid body shots. 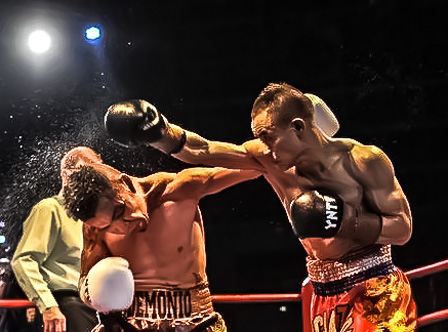 By round six Xiong had settled into a strategy of backing away from Martinez's attacks and then planting himself firmly in place. He would then persistently pepper his opponent with right jabs. At the end of the round Martinez was bleeding profusely from above his left eye.

In the later rounds the action slowed down and the fight spread out. Martinez continued to move forward with wild overhand swings that Xiong countered with increasingly effective jabs to the cut eye.

The bout ended as it began with Martinez dropping his hands and mocking Xiong. In an ending emblematic of the entire fight, Xiong punched the mouthguard out of his opponent's mouth just seconds before the final bell. Tallys for the fight were extremely erratic but the three judges unanimously awarded the fight to Xiong, with scores of 116-114, 116-112 and 119-110. 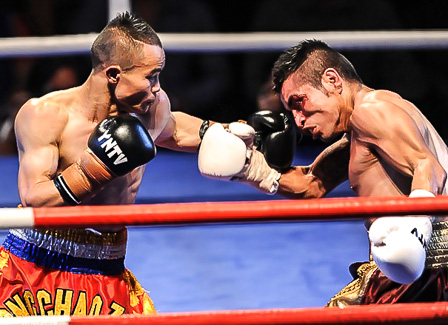 Saturday's fight was the culmination of Xiong's rags to riches story, which the Chinese press played up relentlessly during pre-match coverage. Xiong, referred to now as "Little Tyson," grew up in Wenshan (文山) and worked in a coal mine. He took up boxing at the relatively late age of 22 and now is China's first internationally recognised boxing champion.

The fight took place at Kunming's Municipal Gymnasium, which seats 3,200. The auditorium was roughly two-thirds full. A public address announcer repeatedly screamed Xiong's name over the loudspeaker during the fight and was answered by the crowd with chants of "Jiayou!"

It is now expected that Xiong will fight top-ranked Denver Cuello. Although considered the top boxer in his weight-class, Cuello did not fight for the vacant title so the WBC could raise its profile in China.

Editor's note: Perhaps now that Xiong has won a world title, boxing websites around the globe can refer to him by his given name: Xiong Chaozhong, not Xiong Zhaozhong. It is clearly written on his shorts in giant letters.

This is an amazing breakthrough for China's boxing fans. It is equally amazing that this Champ is from Kunming, Yunnan, the Southwest corner of China.

As a fan of both boxing and Yunnan I believe there is more to come! 加油！