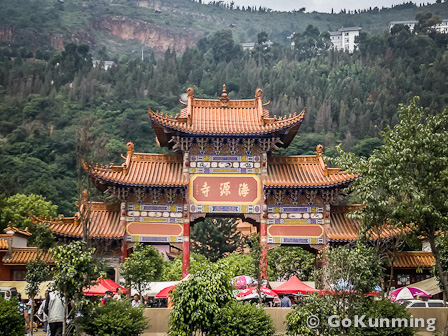 Sitting at the northwest edge of town is one of the Spring City's larger Chan/Zen Buddhist monasteries. We had never been and decided to venture out into the unseasonably crisp weather and check out Haiyuan Temple (海源寺)‎.

The main gate of the temple‎ is impressive, with old wooden beams looming incongruously above the new pavement of the Third Ring Road. Inside the gate is a large public square containing two ill-kept ponds filled with brackish green water — not what we expected upon first catching sight of the gate. Then we heard the concrete drills.

Like so much of Kunming, Haiyuan Temple is under construction. The main pavilion has a fresh coat of paint but the statues of Sakyamuni Buddha (佛陀) and his attendant bodhisattvas Avalokitesvara (观世音) and Mahasthamaprapta (大势至) located inside are as yet unfinished.

The compound's reputed collection of arhat statues — said to be a lesser version of those contained within Bamboo Temple — were nowhere to be found. 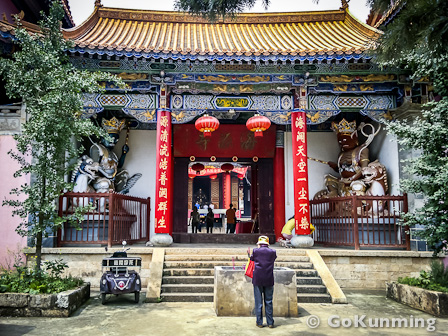 The temple contains a stone inscription near the entrance that declares the temple is more than 1,000 years old, indicating that construction commenced sometime during the Song Dynasty.

However, the temple's Baike webpage claims the monastery was built 700 years ago during the Yuan dynasty. We asked a monk for clarification and with a straight face he told us Haiyuan Temple was over 2,000 years old.

Adding to the mounting sense of a wasted morning was an inauspicious beginning to our tour of the temple grounds. We were scolded by an attendant for entering the main pavilion through its middle door. She quietly but firmly told us that the center door is traditionally used only by monks and the side doors alone were for visitors. 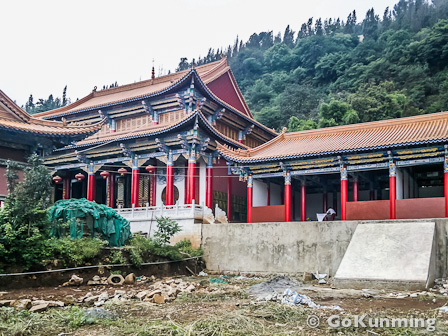 Chagrined, we walked past the construction and began an upward climb on a tree-lined path that veered to the left. This pathway led to the Pavilion of Compassion (大悲阁) which contains a statue of the goddess of mercy, Guanyin.

Perhaps it was the influence of the goddess or the fading construction noise, but we started to feel better about the place. Birds sang in the trees above us and butterflies perched on the surrounding rocks. Haiyaun was starting to feel like a temple at last.

Further up, the cobbled walkway led into shadows below the stone face of Yu'an Mountain (玉案山). A large iron door set into the mountainside opened into a dimly lit cave housing statues of the Three Saints of the West (西方三圣). 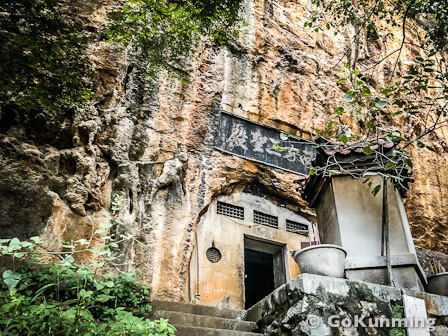 A monk we spoke with inside explained that besides housing statues, the cave had functioned as an explosives depot during the Japanese occupation and later as a treasury storehouse for the Kunming government. He was also very curious to find out our opinions on Chinese women.

We left the cave through a low-roofed tunnel carved into the mountain and emerged beside a small pavilion dedicated to Dizang Wang (地藏王), a bodhisattva who denied himself full enlightenment in order to help others.

We retraced our steps and followed a stone staircase up to yet another pavilion, this one containing a statue of the Purple Bamboo Guanyin (紫竹观音). It sits above the other areas of the temple and is fronted by a quiet terrace with panoramic views of western Kunming. 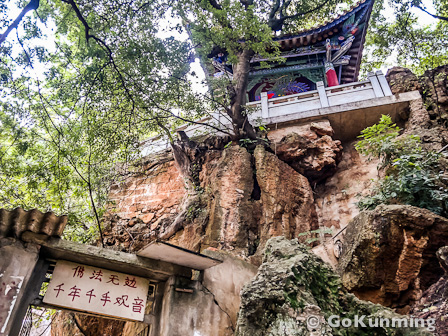 At lunchtime and we poked our heads inside the temple's vegetarian cafeteria. It was jammed full of people and we had already eaten so we skipped it and walked north toward a cluster of outbuildings. The rundown buildings housed small shops selling incense and lined another square with a pond.

The pool is fed by a series of streams from the mountain above. Haiyuan literally means "sea source" and the streams flowing through the temple are traditionally referred to as the 'sources' of Dianchi Lake. 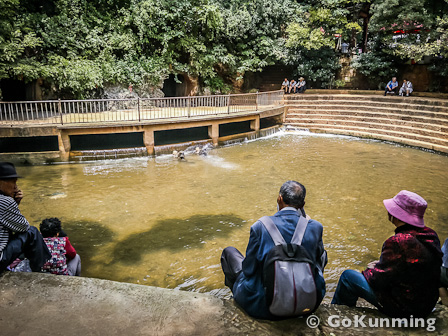 We were told by a passing man that visitors used to be able to buy fish and release them into the pond for good luck. Despite the crowds the area was very quiet and people were sitting around the pond eating picnic lunches and listening to the water rushing through the streams. The entire scene was a relaxing juxtaposition to our original bleak opinion of the temple.

After a short break next to the pond we passed through another gate and found ourselves outside the temple. Horn blaring, a bus sped past on the steep road leading to the public cemetery at the top of Yu'an Mountain. We were back to reality once again. 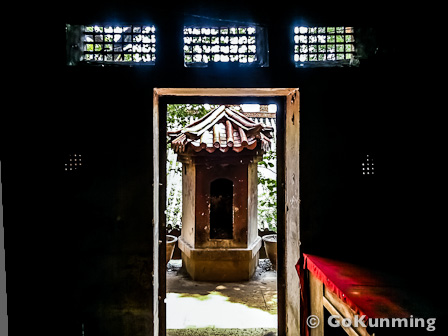 Haiyuan Temple can be reached via the aptly named Haiyuansi Gongjiaochechang (海源寺公交车场) bus stop. It is serviced by bus lines 70, 83, 85, 138 and 180. The temple is roughly 200 meters north of the bus stop, across the third ring road. Taxis from the city center will cost approximately 25-30 yuan.

Editor's note: On Thursdays when the nearby Haiyuan Outdoor Street Market is in full swing, the square in front of Haiyuan Temple is packed with overflow vendors and hundreds of shoppers. The market and temple make a nice morning diversion. For those looking for an entire day out, GoKunming recommends heading to the Yu'an Shan cemetery after shopping and visiting the temple.

Nice article. Honest and intriguing. More like this please!

I live around this area,there's a mountain behind .I go hiking every week,its amazing that u people can take such nice pics,I mean this temple not fix yet, the water is so dirty,
last time I was there with all my friends,we try walk the path,then there's one or two crazy scary dirty black dog bump out !with sharp teeth n angry face!scare me to death!so if u wann go hiking try other road,those guys are not sweetie puppies.