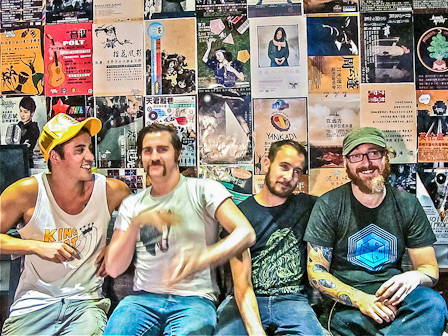 Yunnan plays host to its fair share of rock n' roll shows and music festivals, but the sounds of "math rock" are seldom, if ever, heard. That changed last week when Belfast band And So I Watch You From Afar (ASIWYFA) brought their brand of percussive indie-rock to Kunming's Wenlin Momento.

The group was on a five-city tour of China that included stops in Shanghai, Chengdu, Chongqing, Kunming and Beijing. The band's tour was organized by Chinese promotional company Split Works, who also filmed videos at each of ASIWYFA's performances.

GoKunming had a chance to sit down with the band after their sound check, which was interrupted twice by police.

GoKunming: How has your China tour been so far?

Rory: Immensely good. There was a bit of culture shock at first, but we knew there would be. The Chinese people have looked after us really well and audiences have been great.

GK: What have been some of your first impressions of Kunming?

Johnny: We had a day off yesterday and although we are on a tight schedule we have noticed that Kunming life is lived at a slower pace and the people here are a bit more chill. We have also been enjoying the milder climate. If it gets up to 17 degrees back home that is usually considered a blazingly hot day.

It's been interesting to compare Kunming with Shanghai, where there is such a strong mix of Western and Eastern cultures. Chengdu and Chongqing had a more Eastern vibe and we felt like we were really getting an authentic China experience.

Kunming has a small-city feel to it. Not as many skyscrapers, less hectic, and the people just seem more mellow.

GK: Have you had time to do any sightseeing while you are here?

Niall: We have tried to do as much as we can. We went to Green Lake Park to watch older people doing their morning exercises. We also went to the Bird and Flower Market and did a bit of shopping. We bought souvenirs and some traditional Chinese instruments to take back home. That was cool. 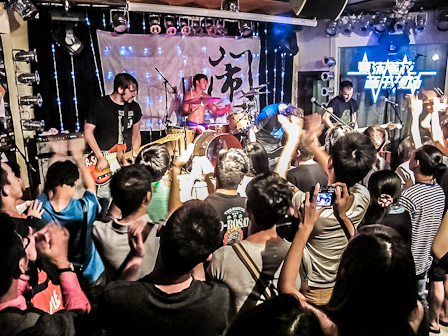 GK: What are some of the challenges to touring in China?

Rory: The language barrier is a big one and some of the gear has been a bit iffy at times. Our stomachs have taken some time to adjust to the diet...or not. The lack of air conditioning has been hard in some of the hotter cities.

However, saying all that, people have been super-helpful and have really tried to make our lives easier. The Chinese have been brilliant.

GK: What differences have you noticed between playing a gig in Kunming and playing in other Chinese cities?

Rory: Time will tell. The police have already been in twice. So it could be one of our shortest sets ever. We are hoping to have an even better interaction with the crowd here than we have in other places. Who knows? Maybe there will be a riot. Just kidding.

GK: Your music has been described in all sorts of ways. How would you characterize it?

Johnny: A loud and honest portrayal of everything we are into. We sound like we do because of the people that are in this band.

GK: Who are some of your inspirations?

Johnny: Everything we have ever listened to. We like to steal all the best bits from everything we like. Friends and family have also been important in shaping the music we make.

GK: How would you describe the current music scene in Belfast?

Niall: We have been touring so much it's hard to say. We try our best to keep up on the internet and we have lots of friends in bands there like Mojo Fury, Kowalski, Desert Hearts, and Lantern for a Gale. 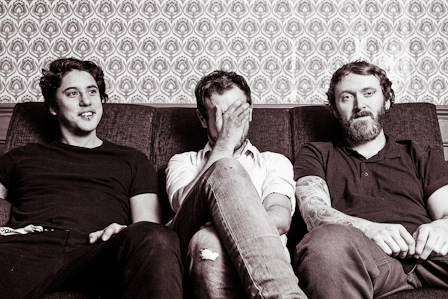 GK: Any humorous stories from the tour so far?

Rory: Our first night night in China I left some equipment in our hotel in Shanghai. I was trying to flag a taxi down with my manager to go back and get our stuff.

A passing moped noticed me and motioned to me, so I jumped on and had the most exhilarating and terrifying journey of my life. I was sure I was being taken away to be mugged.

Johnny: I met a local guy who had a monkey on his shoulder inside a club in Chongqing. That was funny.

GK: What's next for the band after this tour?

Niall: Time off. We have been touring a lot lately. So we are going to take a slightly longer break than usual back home for a while, before we head back out onto the road again.

GK: What have been your favorite China moments?

Johnny: We had a great moment in the Bird and Flower market where this little girl came up to us and just held all of our hands.

Rory: I enjoyed going to Green Lake and watching everyone doing taiqi while I sat and worked on my computer. Kunming has been really cool.