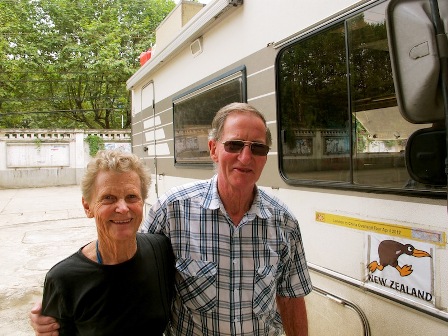 The road trip is a staple of modern Western culture, and even though Yunnan has embraced car culture with a breathtaking quickness, road trips for enjoyment are still not a common phenomenon.

For two Kiwis, a trip through Asia in their recreational vehicle (RV) was a plan many years in the making. With two other couples and their vehicles, Eion and Eliza Rutherford set out from London this spring and arrived in Kunming last week.

Ten years ago the couple retired and handed down their 500-hectare dairy farm to their daughter and son-in-law. The farm has been in the Rutherford family for over 100 years and sits near the middle of New Zealand's south island. It has 1,200 cows and the milk from those cows is often sold in Yunnan.

GoKunming sat down with the couple at Slice of Heaven to talk with the Rutherfords about life on the road and some of their more memorable road trip experiences.

GoKunming: What inspired you to do a trip of such proportions?

Eion: We have always wanted to go across Europe to Asia. We were trying to organize a group to do the Trans-Siberian Railway but later we thought of the motor home idea.

GK: When did the group leave England and how did you manage to arrange a trip like this?

Eion: We all left England together on March 15 and later regrouped on the Ukrainian border. By the time we get back to England after this trip, we will have spent seven months on the road.

All six of us are members of the Silk Road Club, which is a group of like-minded people who travel to far-flung places around the world. We travelled in a convoy across Ukraine, Russia and then went to Kazakhstan. Later on, we crossed into Kyrgyzstan and from there drove to Kashgar, China.

We use walkie-talkies in order to stay in touch with the other two vehicles and these have been really critical, especially in the big cities where it's easy to get separated from the others. 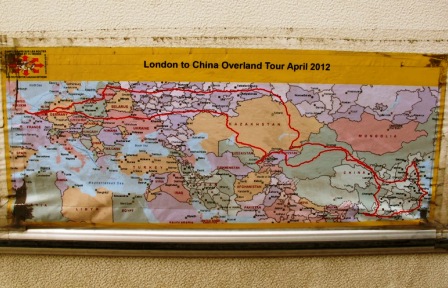 GK: Have you done all this by yourselves or did you have help?

Eion: In order to drive your own RV around China, you need to have a guide with you. We used Navo Tour which is based in Chengdu. They provided us with the paperwork to get Chinese visas, an English-speaking guide, driver's licenses, and license plates.

They got our itinerary approved before we came to China. The cost for each vehicle has been about 67,000 yuan, and that did not include fuel, tolls or entry fees into any of the tourist attractions.

Eliza: Our guide Andy has been with us 24/7 these last few months and we have been very grateful for his support. If you are on your own doing a trip like this you could easily get into some sort of trouble.

GK: Did you see any other RVs that were not in your group on the road while travelling in China?

Eliza: We have seen three other motor homes whilst in China, one of which was Chinese.

GK: Did you have any breakdowns along the way?

Eion: In China, the clutch cable broke on the way but with a bit of Chinese ingenuity we got it fixed at a small mechanic shop. Chinese mechanics are very adaptable and can fix just about anything.

Another vehicle had a water pump break on the way down from Shangri-la and the motor home had to be trucked down to Kunming. We are now waiting for it to be fixed and there is a delay on the parts. Overall the labor costs have been pretty cheap in China and the Chinese mechanics have been wonderful!

GK: Tell us about your motor home.

Eliza: We bought our RV in England two years ago. It's a German brand named Hymer. It is a 1993 model and has a Fiat motor and chassis.

It already has 230,000 kilometers on it. Inside it has a small kitchen, a bathroom with a shower, an open lounge area and a fold-up bed.

We chose to buy an earlier model motor home because they are more robust and have an aluminum exterior. Older RVs were built to last and they are not computerized. This means the motors are simple but strong and therefore easier to fix by any mechanic. 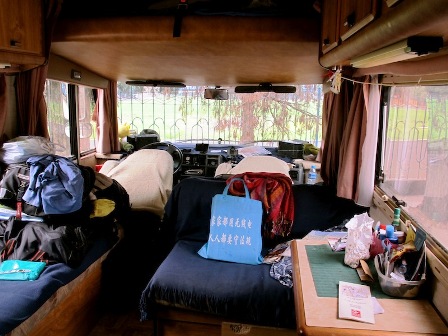 GK: What have been some of the challenges of a trip like this?

Eion: The driving in China has been quite challenging. Passing other vehicles on hilly roads can be tough and massive trucks become quite a scary obstacle at times. Sadly, we have seen the results of some quite bad accidents along the way. Driving is tiring and it took us awhile to get used to all the different time zones.

GK: What have been some of your favorite places you have visited in Yunnan?

Being farmers, it has been interesting to see all the small farms along the way. In New Zealand, farms tend to be large and modernized, whereas here the farms are still quite traditionally operated.

Eliza: We saw harvesting machines here in China with two-meter fronts while in New Zealand the harvesters tend to be about 12 meters across. I worry what will happen to these small farms with the exodus of young Chinese moving to the cities for jobs.

I would say Yunnan has as much to offer as any other province. We have really enjoyed the milder climate here. We have seen some wildlife and flora and fauna that we can't find in New Zealand.

Visiting the tombs of emperors that are thousands of years old has been quite unique, compared with a lot of the historical things in New Zealand that are only a few hundred years old. 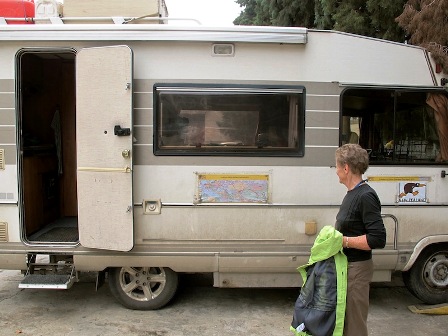 GK: Where do you park your RV while you sleep?

Eion: Hotel car parks in the cities or out the back of truck stop lots. Here in Kunming we are parked inside one of the universities.

GK: Did you feel safe sleeping in the motor home?

Eliza: We have felt very safe in China and often have left the windows open at night. We have had no incidents while in China and have only met with kindness and helpfulness.

On several occasions people have come to our aid when we haven't been able to speak the language. Strangers have helped us order food, too. People have been very curious about our motor home because they are so rare here.

GK: Do you have any amusing stories from your travels through China?

Eion: Along the way down to Yunnan we stopped in a car park and I took some pictures of a sticker on a truck. Suddenly, a local guy stepped out in front of me with a TV camera, accompanied by an attractive young lady.

They were shooting a TV commercial promoting a small city and next thing I knew, they were asking me to say a few words promoting the city.

I kissed the girl on the cheek only to find Eliza angrily coming towards me after leaving a nearby shop. That was pretty funny. Humor is important when travelling.

Also, while we were in Kashgar, we accidently drove into a military zone and found ourselves getting a police escort. All the police cars had their lights flashing and we felt quite important.

At one stage, the police got held up when they realized that even though they were the police they still had to pay the road toll. After a lot of arm waving and arguing they got back in their cars and continued to escort us.