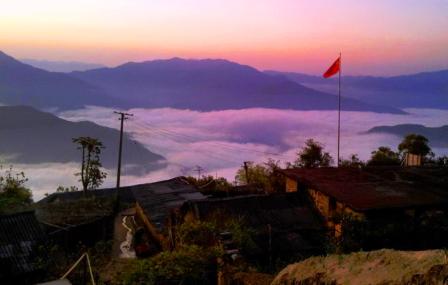 Van de Moortel decided to avoid highways and instead made his way south on small back roads and paths. Below is part three of a condensed four-part travel diary he wrote while traveling through Yunnan toward the Lao border. Please see the first and second posts, which covered the journey from Kunming to Pinghe.

His entire blog of the journey can be viewed on the website crazyguyonabike.

There was no one in the hotel when I woke up, but the gate was open so I was free to go. I left a note on a name card and headed off for some mixian around the corner. As the honored guest, I was entitled to a big piece of chicken bone in my soup noodles. Around 9am, I left the pretty and welcoming town to find my way to Erfu. 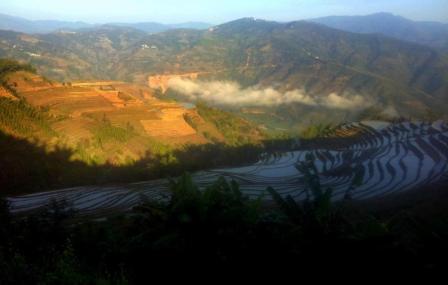 Most people here seem to pronounce it 'Erpu', a linguistic phenomenon I also noticed in Vietnam's Hà Giang (河江) province. The nearest Chinese town was called Malipo, even though most Vietnamese called it 'Malifo'.

A few kilometers into my journey, the road turned into spaced stones. That was ok, as long as it was downhill. Unfortunately there were a few nasty climbs. Not only my hands, but also my butt, legs and basically my entire body were numb from road buzz. The vistas made up for my discomfort. 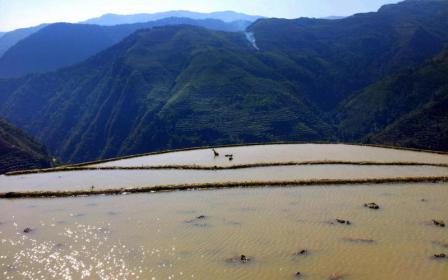 By the time I reached the top of the second climb it was noon and time to stop for a bite. A small town catered to my food needs and I pulled over at a random little restaurant. I knew it wouldn't be long before I was called over by the other patrons. And indeed it happened.

They were Vietnamese with special visas that allowed them to cross back and forth across the border wherever they liked. They didn't seem to speak either Vietnamese or Chinese, so I didn't understand a word. No need. They ordered a dozen half-liters of Dali beer.

When those had all been downed in a few minutes of exchanging welcomes they got another dozen. They claimed to be 15, 16 and 19 but all looked about 13. I ate less than I drank. The youngest kid got stupidly drunk and started rocking uncontrollably. The others quickly followed suit and the last of the beer mostly ended up on the floor. 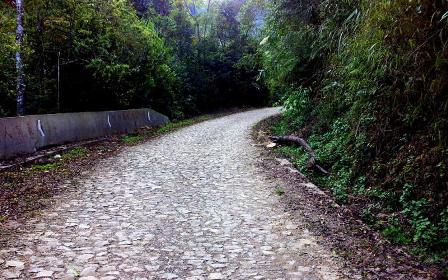 It was time to leave the beery mess and I got up to go. I tried to give the staring villagers a sober impression as I staggered onto my bicycle. I forgot the kickstand, zigzagged a bit and then rolled out of town.

Thank god it was a long downhill. The stone road still required all of my concentration. By the time I reached the bottom, I had regained control of myself. I started climbing again, sweating like a pig.

At the junction to Erfu, the road angled sharply up and became pointy cobblestones. I spent well over an hour on those last ten kilometers, averaging only eight kilometers per hour. The rail of my saddle snapped again and I spent the rest of the haul riding lopsided. 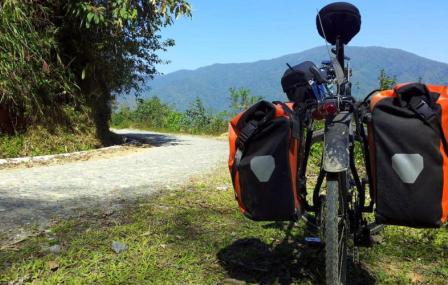 When I got to Erfu the nightmare was over. Friendly villagers helped me readjust the saddle in such a way that the fracture was held together by the mount. They also brought me to one of their houses to eat and drink and then put me in a room with several beds. I chose the most comfortable one and fell asleep after writing just one paragraph in my journal.

I woke up to one of the most amazing vistas, Erfu's Yunhai (云海). Each mountaintop seemed to drift around freely in what indeed looked like a sea of clouds. The road out of the village led right into it. Occasionally, a villager on a motorcycle would emerge from the clouds, the metal glistening in the morning sun. The pink backdrop looked absolutely divine. 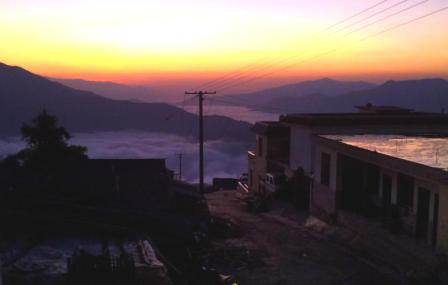 I walked towards the clouds but was stopped by an old Hani woman in traditional clothes. Quite before I knew it, I was sitting in her house with her husband and granddaughter, waiting for breakfast to come.

A cupful of nuts that looked like small acorns but tasted like chestnuts whet my appetite. My hands were still too numb from the day before to open them and I spilled most of the nuts on the floor.

Breakfast came with homebrewed baijiu (白酒). The meal was fried pork lard, mashed chicken, mushrooms, soup with some vegetable that looked vaguely like celery, and rice. I ate until stuffed, watched cheesy music videos celebrating Hani culture, and tried to have a conversation but ended up nodding at their words, none the wiser. 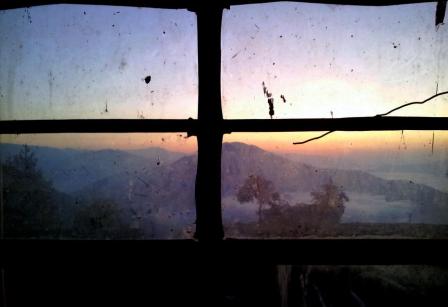 Back at the hotel, people were gathered around a machine that was grinding something that at first looked like already ground meat into a massive pulp. Upon closer inspection, it turned out to be red and white rice smashed into a sticky mess. I was given a bagful and told that my room was free.

It left me in awe that so many people along my ride could think and act without a notion of commerce on their minds. I felt a little ungrateful when later I tossed away the rice goo for tasting like spent chewing gum. 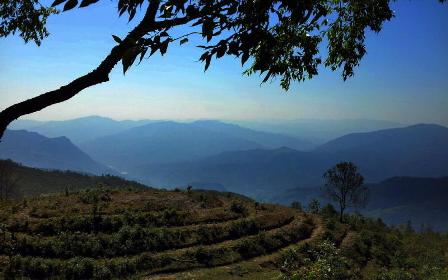 I retraced the ten kilometer cobblestone from the day before and despite its steep downhill gradient allowed myself to go no faster than 15 kilometers per hour. At the fork I was faced with a new ten kilometer uphill followed by the same distance down, all on cobblestone. In Banpo the village grocer had chairs outside and I wanted to relax a bit before continuing on to Qushui (曲水).

However, this was rural China and someone is always bound to invite you to their house. The honor befell the village idiot and I was dragged to a shack up the hill. I left my bicycle and panniers at the mercy of the grocer. 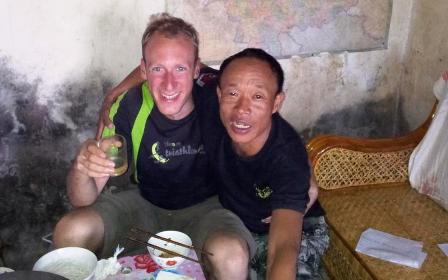 To my relief, the young folks of the village followed me into the madman's house. His Mandarin was awful. All I gathered was that he was once armed police and that he hated the Japanese. He talked a lot, made everyone laugh, produced crazy noises, referred to my nose and continuously called me a Libyan.

The girls translated into putonghua and I was very upset when they suddenly got up and left me alone with the madman. He started to make me lunch. Rather than watching TV, I went outside and helped him pluck a rooster he had just killed.

Two hours and many noises later, his family and the village elder joined us for what ended up being dinner. The guest of honor got the head of the chicken and I nibbled a bit on its outer skin. I had to disappoint by not cracking open the skull and sucking out the brain. 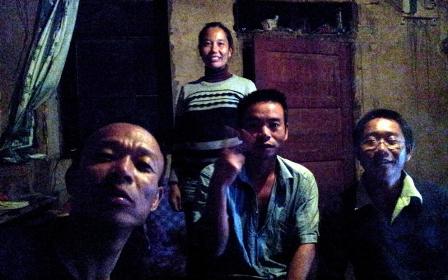 Unable to maintain a decent conversation, I sat and smiled inanely at the torrent of words coming my way. It was all in good fun and my hosts were very nice. I thanked everyone and went to find a hotel.

Later I ventured out and tried to find the younger kids from earlier but instead found people playing majiang. Money was thrown across the table, stakes were raised, but I still didn't get it.

I had to back up a bit on the road before taking another cobblestone road towards the town of Baliu (坝溜). My bike had been making a weird metal clanging sound, but there were too many other rattling noises from the road for me to pinpoint my bike's problem.

The state of the road forced my eyes to its sorry surface. I looked between my legs to find the noise and almost rode out into a gaping abyss. I finally figured out it was my pannier rack. A screw had snapped and the end was stuck in the frame. 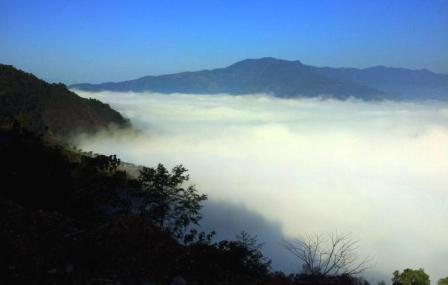 In Banpo, they told me it would be a two kilometer uphill (it was four) followed by a long downhill towards Baliu. Suddenly the cobblestone became gravel, awaiting a layer of asphalt. I had never been happier to see gravel. I broke my fast at the top of the hill with cookies and iced tea and watched Banpo drift in its cloud sea.

Little did I know I would soon be diving into that very cloud sea and get just about as wet. Visibility suddenly dropped to 30 meters. I grabbed a jumper and sped as fast as the gravel permited to the river valley below. My jumper was soaked through when I arrived. 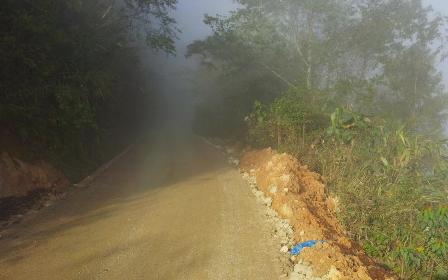 Baliu is a peaceful little town next to the river. I stopped for a chat and was fed pig brains and cold chicken feet. Later, I was offered shuangpinguo (双拼果), a sour and spicy vegetable mashed in a wooden cylinder. I stayed quite a while as new people arrived and asked me questions or tried to ride my bicycle.

I continued my quest for an undocumented shortcut over an upriver dam. A few patches of broken road tempered my speed but not my good mood. The views and the weather were both wonderful.

After the dam, however, I ran into a big, endlessly steep climb. Over the course of 25 kilometers I went from 400 meters elevation to 1,600 meters and then back to 400 meters — several times. 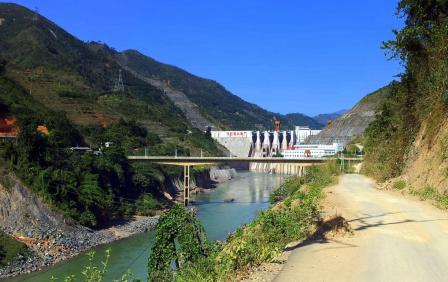 The climbing did not stop until just before Jiangcheng. I found the town full of empty fireworks shells and most businesses closed for Spring Festival. Kids around town were playing with the remaining fireworks.

I got a shabby hostel with a moldy room for 50 yuan a night. I took an ice-cold shower with my riding clothes on, cursing and swearing all the while but too tired to complain to an actual person.

I lived in JiangCheng for a year. Great to see it mentioned. Lovely place to live, although Spring Festival isn't the best time to see it functioning normally!