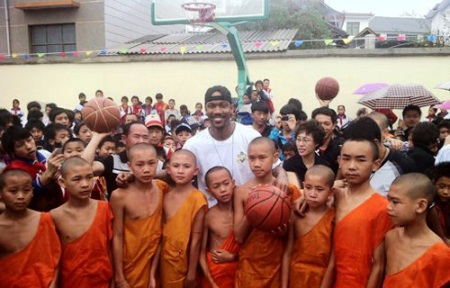 Basketball fans in Menghai, Xishaungbanna got a rare treat on May 7, when they were visited by a star player from the Chinese Basketball Association (CBA).

Stephon Marbury, known as 马布里 in China, spent the day meeting children at a local primary school. He played basketball, signed autographs and donated shoes and sportswear to the school, Titan 24 reported.

The visit was part of a charity trip organized by China Social Welfare Foundation which works to help underprivileged and impoverished children in China.

The foundation is using basketball's immense popularity in China as a way to raise awareness and money for its educational initiatives. In July the foundation will host a mainland basketball tour by current NBA players. Sixteen NBA stars, including China's adopted son Jeremy Lin, will participate in the charity events.

Marbury has been playing basketball in China since 2009 following a 13-year career in the NBA. He currently plays for the Beijing Ducks, and led the team to their first CBA championship earlier this year.

His fame in China grew enormously as his Beijing team played their way into the finals while he wrote several guest columns for the People's Daily.

High-profile visits to Yunnan by professional basketball players have been rare since the Yunnan Honghe Bulls were kicked out of the CBA in 2009 for financial improprieties.

it's disgusting how the government so obviously attempts to dissuade dai youth from learning about their theravadin traditions by mass-bunking them in basketball-court dormitories. this sort of thing is a cultural and political farce.