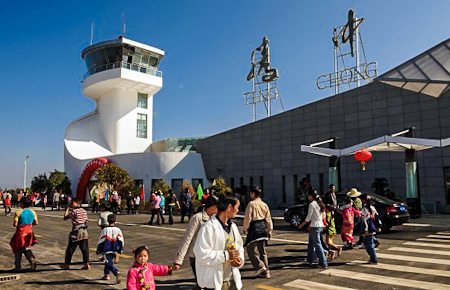 Travelers looking for ever-more convenient ways to get to Yunnan's more secluded areas are increasingly booking airline tickets. In an effort to meet this growing demand, tourist hot-spot Tengchong has added three new air routes connecting it with other major travel destinations in the province.

Regularly scheduled flights now link Tengchong Hump Airport (腾冲驼峰机场) to Dali, Lijiang and Jinghong in Xishuangbanna, InKunming is reporting. Several of the flights have layovers in Kunming before reaching their final destinations. All of the new routes are handled by China Eastern Airlines.

Flights to and from Tengchong are another step toward upgrading airline connectivity between many of Yunnan's smaller cities.

Plans are also underway to begin services between Lijiang, Pu'er, Dehong and Wenshan. As air travel options in the province grow, lengthy transfers in Kunming and other airports could conceivably be phased out.

The Tengchong airport originally opened in 2009 and is named after the air route over the Himalayas flown by the American Volunteer Group (aka the Flying Tigers) and the commercial airliner China National Aviation Corporation (CNAC) during World War II. The airport has the capacity to handle 300,000 passengers a year.

Now if Tengchong could just get a little competition it would be nice. The airline has been charging some pretty steep prices so far due to the lack of competition. The 45 minutes TC-KM ride costs the same as a 3 hour KM-BJ one. In other words: I can buy a return London-Beijing for the same money it would cost me to fly from BJ to Tengchong.