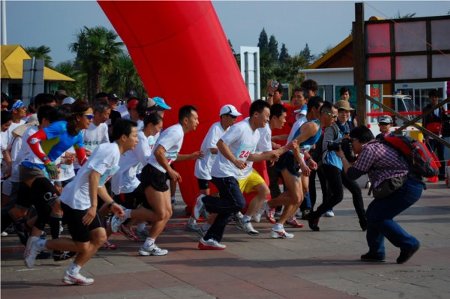 For some Kunmingers, April 22 was just another lovely Sunday. But for hundreds of people who turned out at the north and south ends of Dianchi Lake it was a day to show their support for increased environmental awareness while celebrating Earth Day.

About one thousand people participated in a morning run organised by Jin Feibao (金飞豹) and the Kunming government. The running course began and finished at the Yunnan Minorities Village with the nicest part running through Haigeng Park.

At the start line, Jin addressed the gathered crowd with a general appeal for people to lead more environmentally friendly lives. He particularly stressed the need to reduce the number of journeys people make by car. 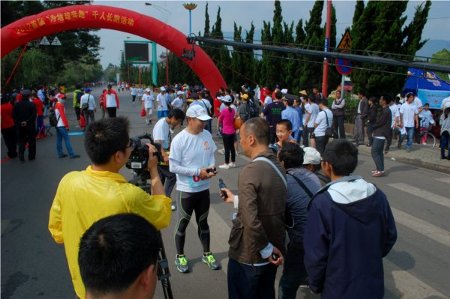 Jin Feibao talks with the media

The 10km race began at 9:15am after Jin's speech and the lead group included some very strong local athletes. A shorter course for participants wanting to show their support but not compete was run simultaneously. The atmosphere was one of camaraderie and friendly cooperation.

The course wound through Haigeng Park and down Dianchi Lu and Xingti Lu. It was effectively cleared of traffic by the local police who, along with volunteers manning checkpoints and water stations, cheered everyone on their way.

While race participants padded along Dianchi's northern shore, another Kunming local embarked on a mammoth bicycle trip from Jinning County to Lisbon, Portugal. Feng Yunxiang (冯云祥) will cycle through 11 different countries on his 19,000km journey to promote the United Nation's resolution that 2012 be "the year of sustainable energy for all." 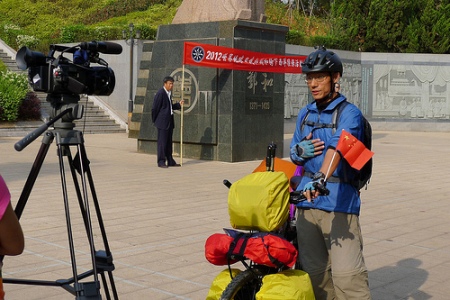 Feng Yunxiang prepares to set out for Portugal

Feng is an experienced cyclist, having taken part in Jin Feibao's 2011 bicycle ride to Singapore. He aims to complete his journey in around 220 days.

Feng's inspiration for this ride comes from two men, China's Ming Dynasty admiral Zheng He (郑和), who was born in Jinning, and Portuguese explorer Henry the Navigator. Feng's progress can be followed on his blog, Lifecycles.me.