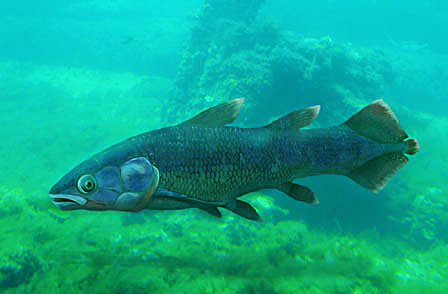 A fossil unearthed in northeastern Yunnan has shed new light on one of the world's oldest aquatic creatures, which is also one of humankind's closest relatives among fish.

Scientists from the Chinese Academy of Sciences published their findings regarding the fossilized skull of a fish belonging to the order coelacanth in the journal Nature Communications on April 11.

The discovery of the new species of coelacanth, dubbed Euporosteus yunnanensis, bumps the earliest coelacanths from the middle Devonian period to the early Devonian period. This puts the coelacanth in the seas at a time when lobe-finned fish, also known as sarcopterygii, were first venturing onto land.

The findings of the Chinese team, led by Min Zhu, offer some answers and raise more questions regarding the fish's anatomical conservatism, or its resistance to evolutionary variation over long geological periods. It is because of this lack of change over hundreds of millions of years that scientists call coelacanths "living fossils".

Coelacanths are a scientific oddity because they were known from the fossil record before a live specimen was ever seen by scientists. The fish were believed to be extinct for over 65 million years until one was caught off the coast of South Africa in 1938. Today coelacanths live in the waters of the Indian Ocean off the eastern coast of Africa and near Indonesia.

In their report, the Chinese research team expressed hope that more E yunnanensis fossils will be found in Yunnan's rock strata. New finds could help explain why coelacanths seemed to be ignored by natural selection at a time when other fish evolved quickly, moved out of the sea and gave rise to new land-dwelling species.

Cool article, but since I have a Coelacanth tattoo on my left arm, and have had it for years, I am cooler by about 1742.3 %. Cheers.

Scarcely believable as it looks far less scaly and irascible!