Report: Eriksson may bring football back to Yunnan 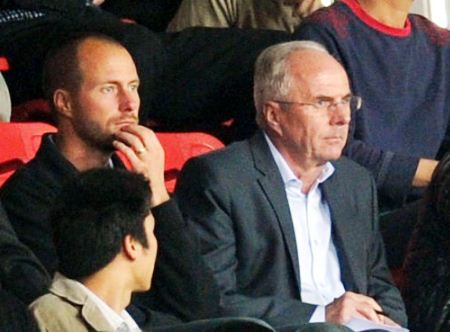 Editor's note: The following article has been republished with permission from Wild East Football, the top English-language website about football (aka soccer) in China.

Former England manager Sven-Göran Eriksson was spotted at a football match in Guangzhou on Sunday and is apparently connected with a move to bring top-level football back to Yunnan.

Chinese media reports that Eriksson is heading up a consortium interested in setting up a Liverpool-affiliated training academy in Kunming. Due to its high altitude, Kunming is the training base of choice for the Chinese national team and China Super League clubs in the pre-season. Liverpool actively solicit franchise opportunities for their academy system on their official website.

The nature of the connection between the investors, Liverpool FC and Eriksson is not explained. The consortium appears to be Reignwood Group and a Thai investment company.

Chinese reports suggest these investors are working with the Yunnan provincial government who are keen to see professional football return to Yunnan for the first time in nearly a decade. Kunming-based Yunnan Hongta were bought and merged into Chongqing Lifan in 2003 to preserve their top division status.

Kunming is currently being moulded into a southeast Asian transport hub with high-speed rail links under construction, and new airport opening later this year, and a move to bring professional football back to the city would fit.

The city has sports training infrastructure already in place, and has supported the Chinese national team relatively well when it has hosted World Cup qualifiers.

The reports say the Yunnan government would most likely try to buy a second division team, with Guangzhou Rizhiquan and Shenzhen thought to be its main targets.

UK tabloid The Sun did report last week that Eriksson had been offered a post as "head... of football in Yunnan Province", and the Chinese press said the Swede took the opportunity to check out the Guangzhou game whilst in China on a business trip.