Most honeymoons last for a week or so before the newlyweds settle into the rhythm of domestic life. After their marriage in a Bangkok McDonald's on July 23, 2001, Charoen and Orawan Othong have been on a honeymoon bike ride around the world that has covered more than 5 years, 35,000 kilometers, six continents and 40 countries.

The Thai honeymooners are currently in Kunming taking a short break then heading south toward Yuanyang and later Vietnam, Cambodia, Laos and Thailand. They are planning on rolling into Thailand in August or September, almost six years after biking out of the country.

Orawan, 36, who goes by her Thai nickname Wan, said that China has been one of the highlights of their bicycle trip. Wan said she thinks Jiuzhaigou in Sichuan is the most beautiful place she has seen in the world so far. She cited the pair's yearlong bike trip across the United States and biking through Colombia as two of her favorite sections of the trip.

"The best thing about this trip is that we are together," said
Charoen - also 36 - who goes by the nickname Mou. "Sometimes we're fighting, sometimes we're not fighting, but we're always together."

Wan and Mou are documenting their journey around the world on their website www.thaibikeworld.com. The site contains information about the couple and their travels as well as journal entries about where they go - Mou is an aspiring travel writer - and a large photo gallery.

The two have experienced many personal firsts during their epic bike ride. On New Zealand's Mount Cook, Mou saw and touched snow for the first time. In Tribune, Kansas in the US, the couple rode horses for the first time on a ranch owned by a friend they made on the road.

There have also been some low points since the couple set out on their journey on November 30, 2001, including getting robbed in Ecuador and the passing of Mou's mother and Wan's father. The two travelers seem to be good at both cherishing life's better moments and dealing with adversity.

"I think getting robbed in Ecuador was a good thing," Wan said. "After that one bad thing happened to us, so many people did good things for us. There are many good people in this world."

Throughout their world travels, the couple has often enjoyed the friendship and generosity of individuals they have met on the way. 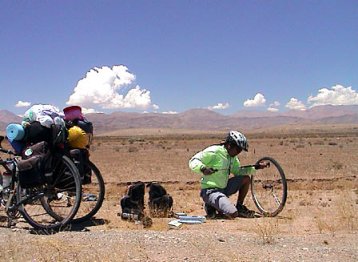 They have also had some much-appreciated support from larger organizations including Thai embassies and consulates, Thai Airways (who provided Wan with free airfare to attend her father's funeral) and McDonald's. After being the first Thai couple to get married in a McDonald's, the pair has enjoyed free McDonald's food and beverages throughout their trek. They said this was especially useful in western Europe, the most expensive segment of their trip.

Originally the couple was not planning on biking through Africa, but Morocco's national airline Royal Air Maroc contacted them, saying they couldn't say they biked around the world if they didn't bike in Africa. The airline then provided the couple with free air tickets to Morocco from New York. They were also invited by the government of Uzbekistan to visit the Central Asian country.

After returning to Thailand, Mou and Wan plan to spend another year biking around Thailand, visiting 80 primary schools throughout the country, where they will talk to schoolchildren about their travels. They are also interested in hosting a TV show in Thailand. Their message for everyone they meet is a simple but powerful one.

"We want to inspire people to follow their dreams," Wan said, "That's our mission."

After completing their dream of cycling around the world, the couple has a new dream they haven't told any of their friends back home yet - they want to open a wellness resort in the beach town of Sichon in southern Thailand near Mou's home. A major undertaking, but given the determination that Mou and Wan have displayed on their honeymoon, they'll likely realize that dream too.

The trip sounds great also their love.Hope their love will last long n all our dreams come true^^