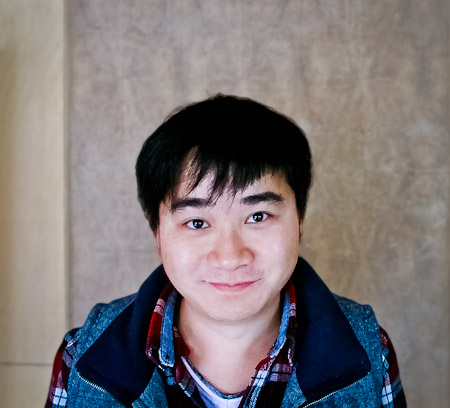 Yunnan cuisine is one of China's lesser-known culinary traditions, but its popularity is steadily growing both domestically and abroad.

Food in Yunnan has so many influences and different cooking methods that it is hard to classify. Beside the myriad recipes and traditions of Chinese cuisine, Yunnan cooks can draw on culinary customs from the province's ethnic minorities as well as those of its Southeast Asian neighbors.

Lin Shuaichao (林帅超) is the host of the popular food show Chubby's Kitchen (小胖厨房), which airs on Kunming TV Channel 6. Speaking in the Kunming dialect Lin demonstrates how to prepare dishes from across Yunnan and occasionally from outside the province. He also seeks out unique restaurants in Kunming and introduces them to his audience.

For those unfamiliar with Lin's show, here is a short video clip:

We spoke to Lin to learn more about Yunnan's culinary specialties and how Yunnan food is changing:

GoKunming: What kind of food do you talk about on your show?

I also talk a lot about mushrooms. Yunnan is famous for its mushrooms and there are many ways to cook them. Yunnan mushrooms can be steamed, boiled, fried, or even just eaten raw.

Tofu is also famous in Yunnan. Shiping doufu (石屏豆腐) and Jianshui doufu (建水县豆) are two types of tofu we use on the show. Yunnan cuisine is not so famous in China, yet there is still some delicious food here.

GK: What are some of your favorite Yunnan dishes?

Lin: I really like pea noodles (豌豆粉) and erkuai (饵块), two dishes that are native to Yunnan. Erkuai is best when it's cooked like a pancake, cut into pieces and then fried with green onions, tomatoes and eggs. This is really famous in Tengchong.

There is an old story about erkuai and the last Southern Ming emperor Zhu Youlang (朱由榔). He fled from Nanjing to Tengchong in western Yunnan. In Tengchong, Zhu was hungry and the villagers offered him erkuai cooked with, ham, egg, tomato, chili peppers and other ingredients. The dish, which he found delicious, saved him from starvation and is now called dajiujia (大救驾), which means 'the emperor's great savior'.

Rice noodles (mixian, 米线) are definitely among my favorites. There are just so many ways to cook them. You know, rice noodles are a lot like bread. It's one of those foods you could eat every day. When people from Yunnan go abroad the thing they usually miss most is rice noodles.

Lin: Yunnan is home to many different ethnic minorities and the spring weather makes Yunnan food special. Many Chinese people have moved to Yunnan from other parts of China and they all bring different styles of cooking with them. Yunnan produces a lot of mushrooms and they are as famous here as goose liver and caviar are in France and Russia.

GK: Is there such a thing as Kunming food?

GK: What are some of the more interesting but lesser-known foods here in Yunnan?

Lin: Fried fish scales. This tastes a lot like fried potatoes when cooked properly. In some places, people eat cow stomach and baked chicken hip. Many people in Yunnan eat a lot of different insects such as bees, worms, cicadas, dragonflies, and grasshoppers, to name a few. 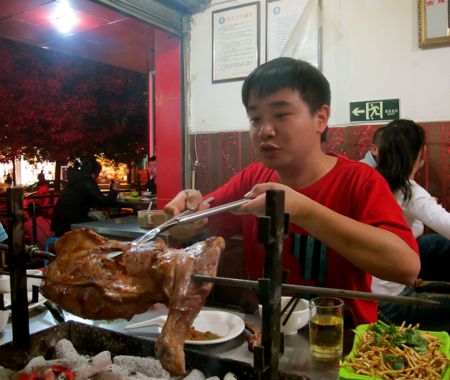 GK: What are some of the more unique minority dishes from around Yunnan?

Lin: There are a lot of special minority dishes here and we like to feature them on the show. Dai food is quite sour and spicy. It's especially great to eat when the weather is hot. Dai people like to add bamboo shoots to rice noodles, vegetables, pork, chicken, or beef. Bamboo shoots should first be fermented in rice water for a few days until they sour.

The Bai people like to eat raw pork, preferably immediately after the pig has been slaughtered. It always tastes better when washed down with rice whiskey. They feed the pigs special food so as to make the meat tastier.

Around Yunnan some minorities also like to cook chicken with pu'er tea.

GK: What do other Chinese people think of Yunnan food?

Lin: To be honest, Chinese people who are not from here think Yunnan's ingredients and cooking methods are a little strange. Traditional Yunnan food can be very spicy. Yunnan food can be as hot as Sichuan food but the chilies here are a bit different.

GK: How has Yunnan food changed over the years?

Lin: It's becoming spicier. Many Sichuan chefs are coming to Kunming because of the development here. Sichuan hot pot is very popular in Yunnan. But we have our own mushroom hot pot, which is unique to Kunming.

There are also many truffles here. The style of cooking truffles is changing a little but the basic ideas are the same.

Many Chinese people from other parts of China are relocating here and they are fusing their styles together with Yunnan food.

GK: What have been some of your best experiences doing the show?

Lin: There is a local woman who runs a restaurant here in Kunming which is very special and a lot of Kunming people know about it and love it. It's called Jianghu Yizhandeng (江湖一盏灯).

This woman has a very bad temper and she never smiles. Patrons who eat there must get their own bowls, clean their own tables and wait for a long time for their food. However, the food is delicious there and so the restaurant is very busy despite the woman's bad temper. Although this restaurant might not be so clean, many rich people go there. There are always luxury cars parked out the front. The restaurant never needs to advertise.

Another unique character is a Hui man I know. He cooks roast beef and lamb kebabs out the front of his house, in an alley near the bird and flower market. He starts work at 12pm and works until 4pm. He is always so charismatic and excited when he is cooking and people love going there. We often wonder why he doesn't have his own restaurant.

GK: What's the best part about your job?

Lin: I can try so many different types of food and I can meet new people and learn many new things. There are many different traditional ways to cook food – every day I'm lucky to have interesting new experiences.

GK: Do you think Yunnan food will ever be as famous as other regional cuisines?

Lin: Maybe, but it will take time.

Hey wow - just realised that Jianghu place he recommended is on the road up to the Bamboo temple! I must have cycled past it 100 times by now. Will definitely go check it out.