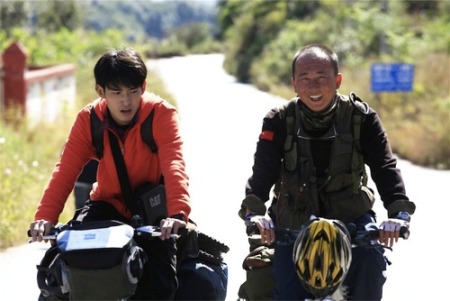 Yunnan and Tibet are home to some of China's greatest natural scenery, yet this natural beauty doesn't often find its way into cinemas. We were intrigued when we first heard about the recently released film Kora (转山), which centers upon a young Taiwanese man's bicycle ride from northwest Yunnan into Tibet.

The Tibetan word kora refers to the circumambulation of a sacred site within a context of pilgrimage and meditation. In this film, the directorial debut of Shanghai-born Du Jiayi (杜家毅), the death of the older brother of protagonist Chang Shu-hao is the catalyst for a coming-of-age bicycle trip.

During the funeral, Shu-hao, played by Bryan Chang (张书豪), discovers his brother's cycling diary and decides to bicycle from Lijiang to Lhasa – a trip his brother never made.

The 1,800-kilometer journey is challenging for reasons other than sheer distance. Over 19 days the altitude fluctuates wildly between 1,000 and 4,000 meters, the associated massive climbs and pressure changes enough to break even experienced cyclists.

After receiving warnings from his friends and getting dumped by his girlfriend, Shu-hao flies with his bike and gear from Taipei to Lijiang. It is his first visit to mainland China and he is quickly duped by a fellow Taiwanese into buying a fake Chinese ID card. Shu-hao's naïve mistake immediately puts a 3,500-yuan (US$550) dent in his budget.

Shortly after commencing his journey, Shu-hao arrives at a section of landslide-covered road outside of Lijiang that only locals are allowed to pass. He considers using his fake ID, but is convinced otherwise by another cyclist.

The cyclist – played by Chinese pro cyclist Li Xiaochuan (李晓川) – introduces himself as Li Xiaochuan from Yunnan. Xiaochuan sees that Shu-hao is unlikely to last long on his own and allows him to tag along.

Shu-hao struggles to keep up with Xiaochuan, during which time Chang's exaggerated cycle-acting is occasionally laughable. After a bit of northwest Yunnan eye candy including Tiger Leaping Gorge and Meili Snow Mountain (Mt Kawagarbo), the cyclists finally reach Tibet. It was at the moment that Shu-hao crosses the Yunnan-Tibet border that we finally felt pulled into the plot.

The first overnight stop for the cyclists in Tibet is in the town of Yanjing (盐井), an old salt-mining town. Xiaochuan's value to Shu-hao rises as the Han-looking Yunnan native begins speaking with locals in proficient Tibetan. He secures a place for the two to sleep for the night, which ends up being a Tibetan family whose son has recently died, leaving his parents, young wife and toddler son behind.

Shu-hao and the young boy play around and get on well, the child providing him with a break from the seriousness of the road as he fills a paternal void. Predictably, the bereaved wife, played by Li Tao (李桃), starts to fall for Shu-hao and the film threatens to go down a sappy romantic path – until the next morning when they get back on the road.

Tibet's breathtaking scenery and Xiaochuan's charisma keep Kora moving forward until fate steps in and separates the cyclists. Shu-hao pushes on toward Lhasa, as he deals with the beginning of winter in Tibet and an unfriendly environment. Looking rather feral, his grip on reality becomes increasingly tenuous. Does Shu-hao make it to Lhasa? Sorry, no spoiler here. 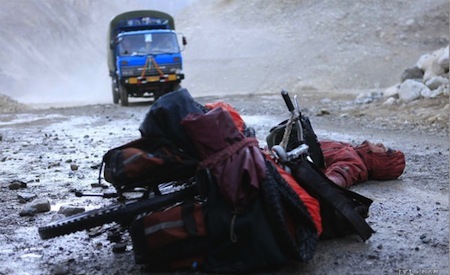 Kora is at its best when depicting the joys and challenges of cycling among spectacular high-altitude mountain terrain like that of Yunnan and Tibet. That said, it often feels as if the scenery gets more attention than the people passing through it.

Shu-hao and the other characters are believable but Du does little to add depth or develop any of them – they are all overshadowed by the ultimate goal: Lhasa. With very little background on Shu-hao's brother or their relationship, we were left wondering whether the point of Shu-hao's trip was to fulfill his brother's dream or to prove something to himself or even his brother. Regardless, we found Kora worth the journey.

Rookie director Du's first effort is solid, but it does have moments where it falls flat, usually to be saved by fantastic shots of Yunnan or Tibet by cinematographer Du Jie (杜婕), or Li's likeable performance. Composer Michiru Oshima's soundtrack deftly complements the story's progression.

Kora was awarded Best Artistic Contribution at the 2011 Tokyo International Film Festival, where it premiered last October. It opened in China last November and is available in DVD stores around Kunming.