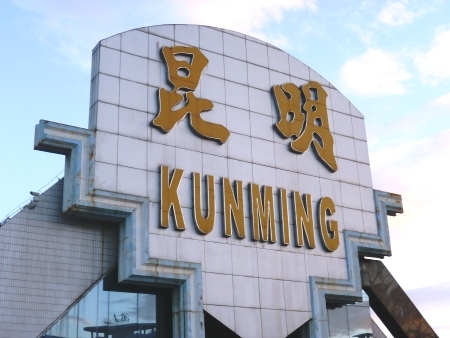 The end of the year is a special time in which editors and writers around the world recycle content from the previous twelve months and repackage it as new content. We at GoKunming are not above this practice, so here's our look at the people and events that shaped 2011 in Kunming and Yunnan.

January
Shortly after meeting Kunming Mayor Zhang Zulin, we set of on the first half-day of Jin Feibao's cycling trip from Kunming to Singapore. Yunnan's border with Vietnam, the only country that was not visited on Jin's Southeast Asian tour, was still plagued by land mines. Not long after meeting us, Mayor Zhang was appointed to a second term - a coincidence, we're sure. Inspired by Jin and his crew, we cycled down to Xishuangbanna and relaxed in Jinghong, where the weather was much better than Kunming's, although not as nice as it was in Chiang Mai. The different Hani villages around Lüchun put their multifarious music, dancing and costumes on parade.

February
Kunmingers were spending more than ever on their weddings, while one professional mistress who lived in Yunnan for years after sneaking over from Vietnam was at the center of a scandalous web of sex and corruption that reached the upper echelons of China's political and business worlds. We sampled delicious handmade rice noodles near Yunnan's border with Myanmar, but in the end they weren't as exciting as chowing down on cigar-sized grub worms. The earliest known evidence of collective behavior was discovered near Fuxian Lake. DJ DSK went on a hiphoptastic tour of collective behavior around Green Lake. We got our train geek on.

March
Jin Feibao and his entourage arrived in Singapore. Yangzonghai Lake was new and improved, with 37 percent less arsenic. An American conservationist and author who came to China because of the postponement of a dam project on the upper reaches of the Yangtze River shared his sobering assessment of the future of conservation in Yunnan. A new dam on the upper reaches of the Yangtze was completed. Drugs were flowing from Myanmar into Yunnan. We visited several interesting places in Myanmar. Later we got high on rocks in Dali and were taken to the crab nebula by SUBS vocalist Kang Mao. Kunming's documentary festival returned. We drank tea and shared thoughts with the design guru of Tianjundian Xiang, a local organic farming pioneer and Xinjiang's top jazzed-out bossanova crooner. Chenggong was empty and we were on a train to nowhere.

April
We rapped about music and life with members of Beijing dance-rock outfit Queen Sea Big Shark, Québécois punks Gouride and Sinne Eeg, Denmark's top jazz singer. We also chatted with the nice boys of Smegma Riot and checked out China's largest seed bank. Yunnan's economy continued its strong growth and Frappuccinos arrived in Kunming. After drinking too much and getting lost in the pleasant former Tea and Horse Caravan outpost of Shuhe, we cycled through the still-unspoiled Nu River valley.

May
Plans to dam the Nu River were made public. Chuxiong's heavy-drinking, kaku-smoking governor got busted. Results of Yunnan's census were announced, and it appeared that the average Yunnanese was wealthier and more literate than before. Unfortunately this positive news was overshadowed by a looming age crunch. The photos of Dr Clinton Millett offered an interesting and rare look at Kunming in 1944. The time machine theme continued with two books by botanist and explorer Dr Joseph Rock, who showed how different Yunnan and Sichuan plus other areas of southwest China were more than 70 years ago. Yunnan was grappling with the pros and cons of its tobacco-focused economy.

June
A landslide cut off the rail link between Kunming and Chengdu, and we checked in on Kunming's upcoming airport. Kunming's trade ties with South Asia were growing stronger and construction on a new train station with planned international routes began in Chenggong, while drugs were flowing across Yunnan's southern border. Paul R Burch's photos of Kunming in 1945 showed a different side of the city, Peter Goullart told tales of a forgotten Lijiang and Adam Kritzer took us trekking through lesser-known areas around Dali. The rural tranquility on the other side of Erhai Lake was relaxing and the urban chaos of Chongqing was intoxicating.

July
A Kunming driver went where no driver has gone before. Kunming's Red roots were hidden in a small alley as it planned on increasing green space. A convicted rapist and murderer's life sentence drew a massive public outcry, which was followed by his sudden retrial and later, his execution. Shanren Band drank its way through Yunnan's countryside, foreigners and Chinese were on a variety of substances in a fictitious Yunnan tourist town and we explored the world's most popular mind-altering beverage. A handful of surprises awaited in the old town of Guandu south of Kunming, while up north we were having fun zipping down Changchong Mountain on our bicycle. The entire world was shocked – SHOCKED! – that there were fake Apple stores in Kunming.

August
Groupon laid off most of its staff in Kunming, and elsewhere in China, as it provided a great example of how not to do business in the Middle Kingdom. We looked for the hidden charms of Chuxiong, where the previously deposed party animal governor was officially kicked out of The Party. Another province-wide drought was looming in Yunnan. We rode our bikes to Dali, where we enjoyed one of the only true microbrews being made in China. Local laowai legend John Nevada Lundemo shared his thoughts on a truly wacky life. The new administration in Thailand threw China's plans to connect Kunming with Southeast Asia by high-speed rail into doubt. The controls on the Kunming time machine were set for the mid-1980s.

September
Gutter oil was on many people's minds and McDonald's launched a new attempt to catch up to KFC in Yunnan. Thousands took in the sights and sounds of a real(ish) music festival in Kunming, where the soundman decided to all but cut the mics of Shanren Band and Sigangli's A Mei, shortly before Cui Jian enjoyed perfect mixing. China beat Singapore in a World Cup qualifying match, with Singapore crying foul. While Kunming's attempt at a no-car day underlined the city's mounting traffic issues, we enjoyed ourselves in Dali and the lesser-known old town of Xizhou, followed by a happy lap around Erhai Lake.

October
Food was getting more expensive everywhere in Yunnan. In Kunming a new water crisis was becoming apparent and some security guards beat a kid to death for no apparent reason. Future Kunming metro travelers were being assured that the city's upcoming light rail transit would be safe and comfortable. We hit Shicheng and Xihua Wetlands Park, two of Kunming's lesser-known places to escape the city. Spicy yellow pot chicken was slightly more interesting than regular yellow pot chicken. We went on a field trip to the Yunnan Provincial Museum.

November
Things were a bit interview- and travel-heavy. We spoke with a crazy guy on a bike, one of Kunming's leading social workers, one of the city's top local DJs and an expert on the still-mysterious Dian Kingdom. Bicycles were ridden between Yunnan's top two tourist towns and along the old French-built railway and we enjoyed Songpan and Huanglong, two of Sichuan's many beautiful destinations. China and India agreed to play war games again. Animals in the city zoo were less than happy.

December
Kunming's Qiu He era ended abruptly. The municipal government demolished its old offices and vowed to rebuild Wenmiao. Off to the west, restoration work was underway on a forgotten British consulate. Colin Flahive sawed a massive boar in half. We looked forward to three developments that just might put Kunming on the global map.

Well done Chris. This city feels far more interesting when a year is compressed into page.

What year in Kunming would be complete without Colin doing a wacky food experiment?

Hey, thanks for the lovely year-end review. I especially loved the August part where the interview with the guy talks about his "wacky life". Wacked, indeed, I'd say.

Peace, Love and 3 days of understanding, like Woodstock. And you should have been there. Oops, you weren't even born then.
Nevada

Thanks to all for being our daily news.
Great job guys.

Hopefully the New Year will bring a lot more of these interesting articles.
Happy New Year to the gokunming crew and the contributors.