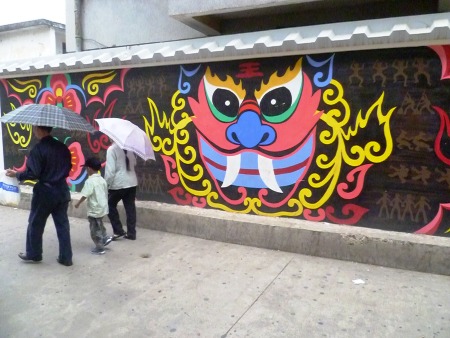 Chuxiong may be the most famous city in Yunnan that nobody visits. Almost exactly halfway between Kunming and Dali, Chuxiong is best known as a rest stop where bus passengers shuttling between the two cities use the bathroom, grab a quick bite or just stretch, perhaps while looking at its iconic red pagoda and wondering what lies beyond.

Last week we decided to see for ourselves. What we found was a pleasant-enough city that makes for a good stopover for a day or two to break up travel between Kunming and Dali.

After the two-hour bus ride from Kunming, we still had some daylight left and thought we'd investigate the Yi Ancient Town, a new eight-phase real estate project that in theory celebrates the cultural heritage of the Yi people, who were previously known as the Lolo. In reality, Yi Ancient Town would seem to be a tourism/nightlife/shopping district designed for a city that had never planned for such things. 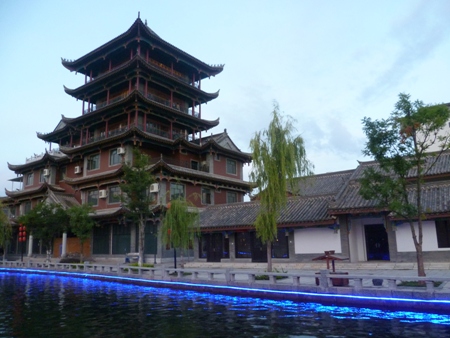 As far as we could tell, there wasn't anything ancient in Yi Ancient Town, but it was nice enough for strolling around. Chuxiong's cool, clean air and sunny blue skies reminded us of our recent visit to Guandu Old Town in Kunming – short on character but plenty of the unexpected.

One of the bigger surprises in Yi Ancient Town was its Korean Street, which has several Korean restaurants and supermarkets, most of which are owned by Chaoxian minorities from northeast China. There was one real Korean family – the Lee family – who had moved to Chuxiong to set up a restaurant, a cultural exchange center and even a live music bar one block away. 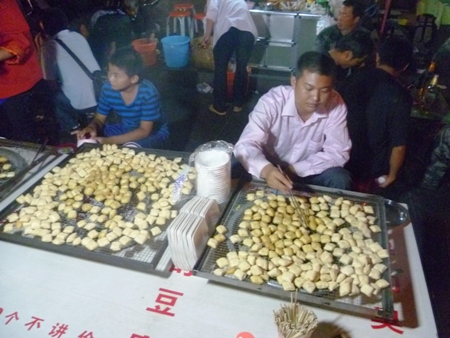 After a tasty homecooked Korean dinner it was time for a stroll around the night market that radiates from Yi Ancient Town's main gateway. As expected, there was much barbecued mutton, some karaoke, and plenty of local snacks such as Chuxiong-style stinky tofu and cold rice noodles with chicken (凉鸡米线). Much of the snack fare available was also reminiscent of Guandu Old Town. 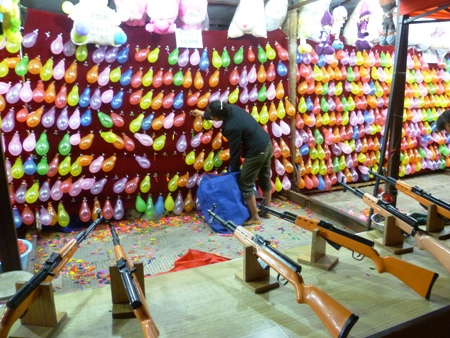 Nevertheless, there was a slight carnival feel, with bb guns and balloons, a stand with mountains of coconuts and pineapples (but no rum) and loads of trinkets for sale. We followed half an hour of strolling around and peoplewatching with an intimate traditional Korean flute and drum performance by Harang and Jina Lee at the Hanbae Cultural Center and called it a day.

The next morning we conducted a little research among locals to find out where the city's most interesting spots were and it seemed that they were all parks. We hopped a cab to Xishan Diecui Park with the hope of getting a small workout with some city views.

The park itself, which is free, wasn't anything special, but the walk up to the top of the large hill was rather serene and provided some perspective on the size of Chuxiong, which is the administrative seat of Chuxiong Yi Autonomous Prefecture. 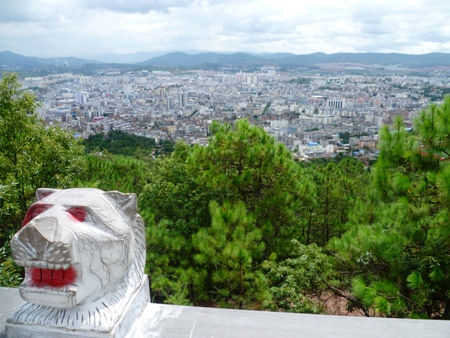 Its population creeping up on half a million, Chuxiong is very obviously expanding, with numerous large-scale residential and commercial developments that wouldn't look out of place in Kunming on the fringe of a generally low-rise city center, through which the Long Jiang ('Dragon River') flows. 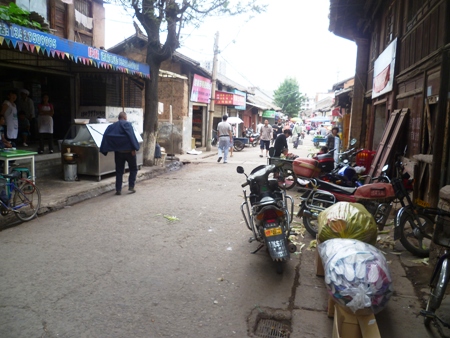 Heading out of Xishan Park's main gate approximately 100 meters downhill, the road, Yunquan Jie (云泉街) becomes much older than the post-1949 architecture that characterizes most of Chuxiong. Feeling a bit peckish, we sat down at a Muslim restaurant run by a friendly Hui family. 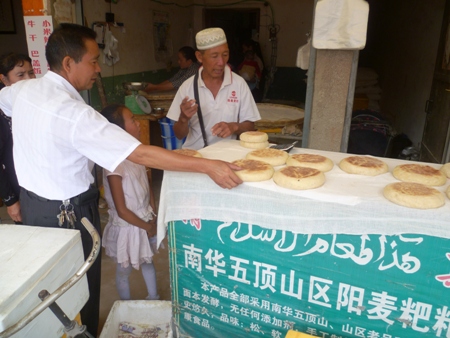 While waiting for lunch, we munched on a Nanhua-style baba (粑粑) flatbread, which was baked fresh next door. Tasty, and for only one yuan, very cheap. A simple lunch of egg fried rice plus stir-fried veggies hit the spot and it was time for more exploration. 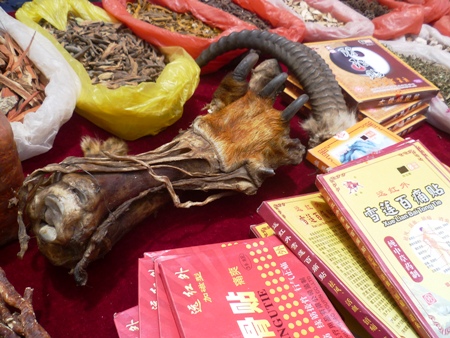 Down the street an old man was selling a rainbow of herbal medicines plus cowrie shells, some animal horns and one animal paw. We enquired the origin of the paw and were told that it was from a Tibetan tiger. Good for erectile dysfunction, no doubt. 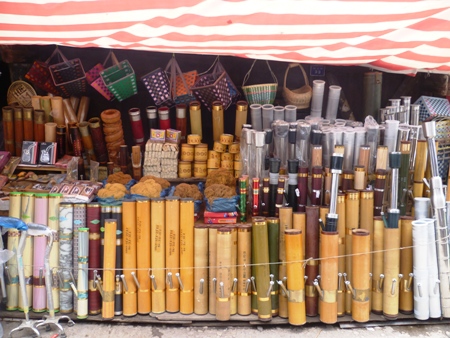 The rest of Yunquan Jie, which would appear to have an upcoming date with a demolition crew, was a smattering of small restaurants, a barber shop and one store selling Communist kitsch. Around the corner on Xinyi Jie (信义街) there were more shopping options, including houseplants, ceramic containers of all sorts and bongs of every size and shape. Eager to climb the pagoda we'd seen on all those bus trips to and from Dali, we caught a 10-yuan cab across town to Futa Park (福塔公园), which was also free to enter. You'll need to hand over two yuan if you want to enter the nine-story, 59-meter pagoda, which has a fat laughing Buddha statue in front and several more inside. All the Buddha statues' belly buttons, big toes and other extremities have been rubbed smooth by visitors – it occurred to us that the statues may be laughing out of ticklishness. Climbing the Futa, or 'Pagoda of Good Fortune' allows for a good assessment of one's cardiovascular fitness. Most visitors are panting by the time they've reached the top floor – and realized that they'll have to descend a floor to enjoy the highest views provided by the building. 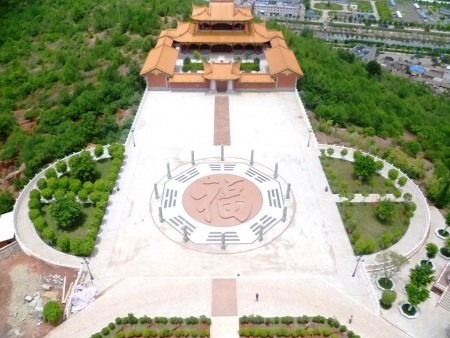 The view from above

According to the ticket we purchased to ascend the pagoda, it had recently been rebuilt on the ruins of an edifice that dated back to the Ming Dynasty. We'd probably have preferred the ruins, but from a business perspective it probably makes more sense to build a new pagoda for the domestic travel market.

After heading back to our taxi, we asked where the best chance of finding real antiques might be. The driver recommended a small bird and flower market on the southeast corner of Longjiang Park (龙江公园) in the city center. 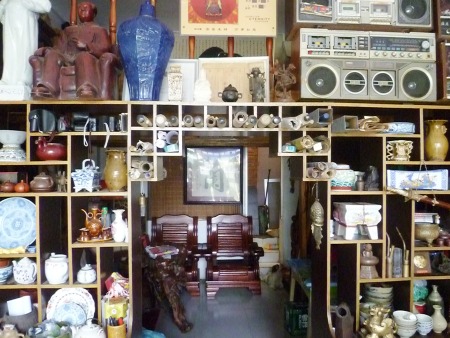 Smaller than Kunming's old bird and flower market, this one had a handful of plant shops and a few stalls selling what were purported to be antiques, but looked rather fake. Then we found Juedi Shoucang (掘地收藏) a small shop with a friendly owner and a slightly random collection of old porcelain, Mao Zedong paraphernalia and an 'antique' from the 80s – a cassette boombox. One of the more interesting items was not for sale. It was the front page of a newspaper from 1976 announcing the passing of Chairman Mao, with a photo of his corpse lying in an uneasy peace. It was difficult to believe that only 35 years had passed since that momentous turning point in modern China's history.

Outside the shop, Longjiang Park was somewhat reminiscent of Green Lake Park in Kunming, but this park had one major advantage over its Kunming cousin – it had vast expanses of grass that people could walk or even sit on.

Casting aside concerns of overdosing on Chuxiong parks, we hit the last remaining one Taiyangli Park (太阳历公园), which was the closest park to our hotel in Yi Ancient Town and seems to have been built about as recently as the new "old town". Featuring statues of animals in the Yi zodiac – which includes animals absent from the Chinese zodiac such as the pangolin – and ten large totem poles, the large solar calendar or taiyangli from which the park takes its name feels like it might have been the idea of an ambitious official in the Chuxiong tourism bureau, but the surrounding park is filled with unexpected items including weird sculptures, concrete gourds big enough to stand inside and a paddleboat graveyard. At the end of our time in Chuxiong, it was hard not to wonder where the real local Yi culture had gone. The only thing we had encountered that appeared genuine were a few paintings in the Hanbae Cultural Center that came from a middle-aged local Yi painter. We were told that if we wanted to see what real Yi culture, we'd have to head far out of the city into the hills, where traditions supposedly still survive in small villages - considering how easy Chuxiong is to get to, we may be back to do just that.

Lodging
Youjia Guzhan Hotel and De Long Hotel are both comfortable new hotels in Yi Ancient Village with full price standard rooms from 400-500 yuan/night that can usually rented for half price during low season. Hanbae Cultural Center is currently renovating eight guest rooms that should be ready by next month.

Getting There
Express buses leave regularly from Kunming's West Bus Station for Chuxiong all day until 5:30. Make sure to buy your ticket at the Express (高快) counter. Tickets are 53 yuan and the trip takes two hours.

Once again, thanks for a quick tour of Chuxiong! As in your other pieces, it's easy to get a feeling for the sites you visit in Yunnan through the realistic pictures and text.

As for Yi culture, readers might be interested in a novel that just came out in Chinese, "Bisezhai Village" (碧色寨) by Kunming-based Fan Wen (范稳). Bisezhai Village was home to one of the train stations along the Yunnan-Vietnam Railroad opened in 1910, and the novel chronicles culture shock between the French colonialists masterminding the railway, and the Yi people in the village.

If you'd like to read a brief book review in English, visit here:

Try coming here to Xiangyun and surroundings for another infrequent stopover between Kunming and Dali. Though admittedly it might have even less to offer than Chuxiong in terms of things of interest.

I just been there one time,and that time I were a little girl,but in my impress,there is a good place,people in there are very friendly.I like the Yi peoples' culture in there,I think it is very nature.I want to go there again!

about lodging the prices range in that article might scares a few of...in 2017 i found a very comfortable place for 80yuan in the ancient town (during dragon boat festival-holiday time).inside the room had a mahjong table.
i do not speak chinese and before i found the 80yuan one..i was quoted 120yuan by another place but after checking all the pages of my passport they did not accomodate me (too lazy or just did not want to accomodate suspicious foreigner with many stamps on passport...who knows)