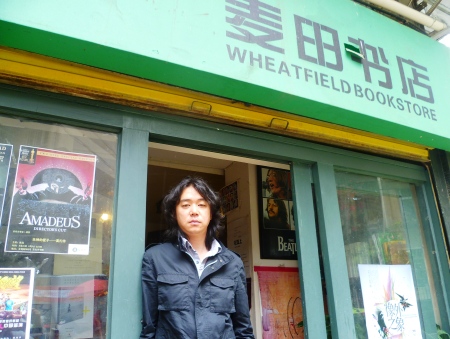 Just a decade ago, Kunming was a quirky backwater in a remote corner of China, but today the city is steamrolling toward a modern, developed future. City planners and property developers are busy sculpting a new face for the city, but what about its soul?

Culture and the arts don't come from five-year plans, they come from people who, while not necessarily rejecting consumer culture and so-called "development", desire to explore and understand the human condition.

Since founding Wheatfield Bookstore in 2001, Kunming native Ma Li (马力) has been an integral member of the city's cultural community. In addition to offering an eclectic selection of modern and ancient Chinese books as well as Chinese-language editions of classics by Kerouac, Baudelaire, Murakami and others, Wheatfield also sells advance tickets to cultural events around Kunming and Yunnan and also publishes its own books. As far as we can tell, it's also the only record shop in Yunnan that actually sells records.

On top of all that, the tiny bookstore between Wenlin Jie and Wenhua Xiang released its first album late last year – the EP Kunming Time (昆明时间) by local post-rock quintet Strange Day (奇怪的日子), whose drummer is none other than Ma himself. The EP is one of the better recordings of original music to come out of Kunming in recent years.

A Night Without Everything (无所事事的夜晚)

We sat down in front of Wheatfield with the Renaissance man of Kunming's underground to find out more about recent developments with the band, the bookstore and more:

GoKunming: Let's start off with Strange Day... We've been listening to Kunming Time at the office recently and it seems that the band is moving away from its previous melancholy sound to a more uptempo and upbeat feel that is much more accessible than your previous albums. What's behind the change?

Ma Li: Kunming Time is our first album with our new band lineup. Our song structures and melodies are much better than before – we used to be much more experimental. I would say the band's sound is much fuller now.

GK: Has the new Strange Day played any gigs since releasing Kunming Time?

GK: As a band that normally plays more intimate venues, how was it to get up in front of thousands of people in Shuhe?

Ma Li: It was great. The audience was very receptive, we got a really warm vibe off everyone and lots of positive feedback.

GK: Does Strange Day have any gigs coming up?

Ma Li: It looks like we'll probably be playing the Chengjiang Music Festival on August 5. Originally we wanted to do a mini-tour hitting Chengdu and Chongqing later this year, but now we're focused on getting ready for the Chengjiang festival as well as recording a new album.

GK: How far along is the new album?

Ma Li: We're already practicing new songs for the album. I think this one will feel much more mature than Kunming Time.

GK: As a musician, do you prefer the studio or the stage?

Ma Li: I prefer performing. A good band should sound best when up on stage. GK: Moving on to your bookstore, what role would you say Wheatfield plays in Kunming?

Ma Li: Some people call Wheatfield a cultural landmark in Kunming. People who are into culture and art stop by when they're in the neighborhood. Sometimes they buy a book or two, sometimes they just hang out.

Ma Li: Mostly books, especially travel essays. A lot of people seem to like Yunnan Anecdotes (云南掌故) by Luo Yangru (罗养儒), who traveled around Yunnan during the Ming dynasty and wrote about his experiences and the different situations he encountered.

A couple of our more popular books are collections of poetry by local poets Lao Liu (老六) and Yu Jian (于坚) – we designed and published both books ourselves.

GK: Wheatfield's record label Maiyinyue released Kunming Time last year and will release another Strange Day album later this year – do you have any plans to release albums by other bands?

Ma Li: We'd definitely like to publish other bands' albums, and are currently looking for suitable bands to add to the label. At present we're most interested in post rock or folk rock.

GK: Other than the odd stack of old records at second-hand markets around Yunnan, you've got the biggest collection of records for sale in the province. Do people actually buy records in Kunming?

Ma Li: Very few. Too few. But we sell vinyl anyway because I love it for the listening experience. I've collected a lot of records and find that the feeling is a world apart from digital recordings, the sound is much better.

GK: We last chatted with you five years ago – what would you say has been the biggest cultural development in Yunnan in that time?

Ma Li: In Yunnan over the last few years there have been more and more music events, especially music festivals. For a while there was a real lull in terms of big musical events. Festivals are very beneficial to the scene in general – they offer an ideal platform and motivation for bands to improve their live shows.

GK: As a member of Kunming's culture industry, how would you characterize the relationship between the average Kunminger and culture?

Ma Li: In Kunming, there just doesn't seem to be much room for culture or art in the average person's daily life.

GK: Ten years ago Kunming felt like a city with a distinct identity, how would you describe the city's sense of identity in 2011?

Ma Li: [Sighs.] Right now Kunming's identity is pretty nebulous. It's got the nice weather and chilled-out-place-to-live thing, but is quickly moving toward becoming a massive fast-paced metropolis. It's a comfortable place to live, but you can feel the outside world creeping in more and more.

Thanks for the nice interview Ma Li. Good luck with your recording and "Kunming Time." Strange Day and Wheatfield Bookstore have been and are important to all of us in Kunming and Yunnan...

I love these songs