From Ibiza to Kunming: Banxy

The international music scene in China has grown by leaps and bounds in the past several years. As recently as 2000 an international act performing on the mainland was still a rare occurrence. 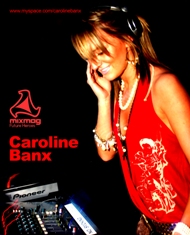 Things have changed considerably since those days. Today China is becoming an increasingly hot destination for international touring acts. In the last couple of years, major acts like The Rolling Stones, Eric Clapton, Bela Fleck and Paul Oakenfold plus a host of other lesser-known bands and DJs have been bringing their music to China, clearing the way for the country to become a viable stop for performers planning Asian tours.

Deep in the Chinese hinterland, Kunming is only beginning to see an increase in international touring acts. In the last year there have been some international acts and tours coming through town, most notably French DJ Miss Ill and the Finland-based Sounds Like Suomi tour.

Accomplished British DJ and producer Banxy, aka Caroline Banx, has made Kunming her China base for the last month and has already taken her mix of minimal techno/electro and psychedelic trance to a handful of Chinese cities including Xiamen and Harbin. A prominent DJ for the last five years, Banxy will be sticking around until the late spring before heading back to Ibiza, Spain, where she spent much of 2006.

GK: Female DJs are still a rarity, do you find any difficulties or challenges as a woman in this line of work?

Banxy: If you're a female dj you're in a massive minority. You have to prove yourself as a DJ more than a guy would because a lot of people don't take you seriously.

GK: During your stay in China, you'll be playing vinyl rather than CDs like many DJs in this country, why are you opting for records over CDs?

Banxy: I use CDJs as well as vinyl, but I love the traditional feel of playing with vinyl, there's nothing that compares. I have just gotten hooked on serato and am having a lot of fun with that too.

GK: How were your experiences in Ibiza?

Banxy: I have played in Ibiza many times now, last year I played for a company called Subsonic - they were putting parties on in an abandoned zoo. This year I'll have a residency with Subsonic during the summer. Ibiza's got the most amazing party scene. All the music and DJs are cutting edge, and Ibiza itself has a special, magical vibe.

GK: Kunming is a bit off the beaten track for international DJs performing in China, what brought you here?

Banxy: I came to Kunming primarily because Sam Debell (Speakeasy co-owner) and DJ DSK are looking after my booking, and they're based in Kunming.

GK: What's your impression of the international music scenes in China and Kunming?

Banxy: The big cities like Shanghai have really good music scenes, they're bringing in international DJs every week. In the provinces outside of the big cities, performing is really hard work, because the music that I play is new to most people in these places.

(Laughing) I've been to Kundu -there is not much of a club scene in Kunming. But Kunming definitely has potential.

GK: You'll be in Kunming and China for a few more months, what are your goals while you're here?

Banxy: I was originally booked from the UK to play two gigs in China in January. I missed my flight home partying in Guangzhou and have somehow been absorbed into Chinese life. My goals while I'm here are to spread beautiful music to every province, get some parties going in Kunming, master cubase, party and learn some Chinese."

And Then There Were None (Agatha Christie)