Into Singapore
As some readers might already know, we completed our trip on March 23 by flying back to Kunming. We had been on the road for 74 days, and cycled nearly 6,300 kilometers (4,000 miles). Although it was so nice to return to Kunming (my home away from home), it was tough to leave that lifestyle behind, and I think we were all ready to continue on to the rest of the world. I guess it will have to wait till next time.

Singapore was wonderful. We crossed the bridge in the early afternoon and had no problems at the checkpoint. We entered Singapore at Woodlands in the northwest part of the island and our hostel was 30-plus kilometers away in the southeast. We took our time getting there, and I have to admit that Singapore has been the nicest city so far in which to bicycle. The streets are very wide and there aren't very many cars. On top of that, the island is large enough to allow one to stay away from downtown, with lots of parks in the north, west and east. 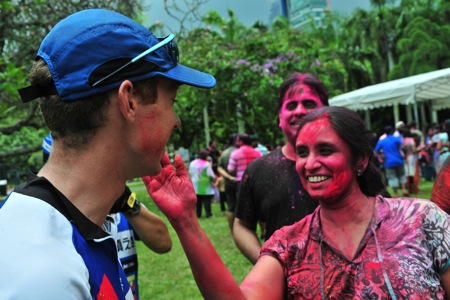 Celebrating the Hindu festival of Holi in Singapore

Since our team hadn't stayed in a hostel on this trip yet, I was a little worried that they would not like the arrangements that I had set up in Singapore. Luckily, I was wrong, and we had an amazing four days in Singapore at the Betel Box Youth Hostel. The accommodations are basic, but the wealth of information from the staff, and the pleasant atmosphere, made the experience priceless and left us thinking we might just know more about Singapore than the average local! 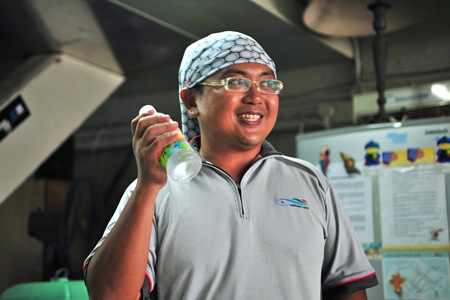 Tony showing off Newater, made from recycled sewage water

Tony Tan, the owner of the hostel, was the main reason our experience was so memorable. Our first full day he took us on one of his signature free cycling tours through the city, which lasted well past dark. The main themes of the tour focused on water resources and land reclamation, two major issues that the small island nation has to deal with. About halfway through the tour we stopped at an NGO he works with called Waterways, and had a nice water break. The water that we drank was called Newater, water that is purified from recycled sewage water. It was quite refreshing, and had no taste whatsoever. The tour neared its end in the downtown area, where Tony continued to impress us with his vast store of information about Singaporean historical and current events.

On the second day, Tony arranged for us to speak at the hostel about our trip and Feibao's adventure. Feibao and I gave a well received presentation, which filled the hostel community room. It was much smaller than the other events that we had participated in, but it was much more comfortable and allowed everybody to really get involved. Aside from a variety of community members and hostel-goers, we were also glad to meet Singapore's most traveled man, Tan Wee Cheng, and Singapore's equivalent of Feibao, Kwoo Swee Chiow. We are looking forward to keeping in touch, and possibly coordinate future events together. Afterward, we continued chatting until the early hours of the morning. 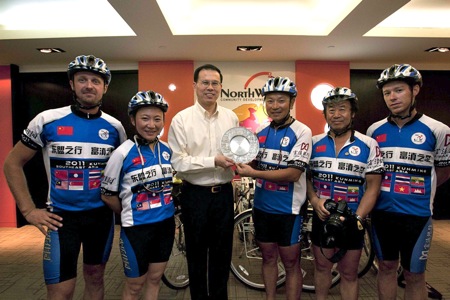 Our last day in Singapore, we cycled all the way back to the Northwest District to deliver our final letter of friendship from the Mayor of Kunming, Mr Zhang Zulin, to one of the five mayors of Singapore, Mr Teo Ho Pin, who was eager to hear all of our stories.

Finally, we packed all of our bikes into boxes and went to the airport. We encountered two major problems on our trip back. The first was somewhat expected: our luggage was too heavy. Each passenger was allowed 20 kilos, and our bikes are 18 kilos each! We tried to carry on all of our heavy luggage, and since we were 7 passengers, and only 6 bikes (we left Fei Xuan's bike behind), we thought we might sneak by. Altogether, we were still 70 kilos over the limit, which was going to cost us over 1500 USD! Luckily we arrived early enough and after about an hour of bargaining (and showing them our picture in the day's newspaper!) they finally let us slide by without spending a dime. 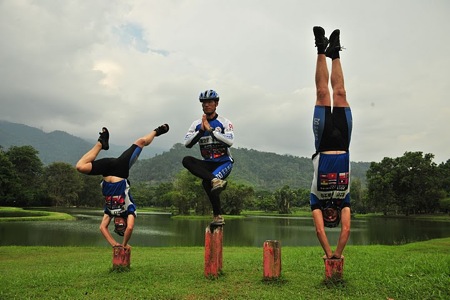 Back in China
Arriving in China was bittersweet. It felt very good to be back in Kunming, but there are always those things that you can't overlook about China: crowded streets, pollution, poor manners toward strangers, and the lumbering bureaucracy. Upon arrival two of our team members were taken aside and their luggage meticulously examined. They wanted receipts for everything that was purchased, even for things purchased in China. They were clearly just looking for this week's paycheck. Worst of all, they collected about US$100 worth of books that the members had purchased in Singapore. 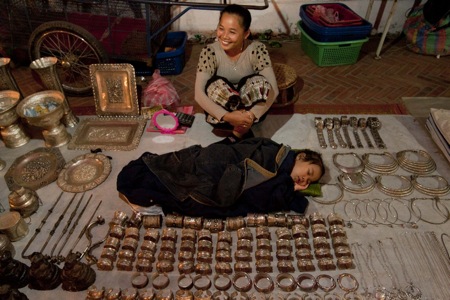 So we've been back in China now for a few days, and I've been working hard trying to stay warm and digest my impressions of the trip. We have been busy winding down, giving short interviews, and enjoying the large meals that we are getting treated to. Feibao was live on the radio for two hours two days ago, and I joined him for two more hours on a video interview for China's largest website, people.com.cn. They have also asked me to come back and talk about my grandfather, who was stationed in Kunming during the Second World War. 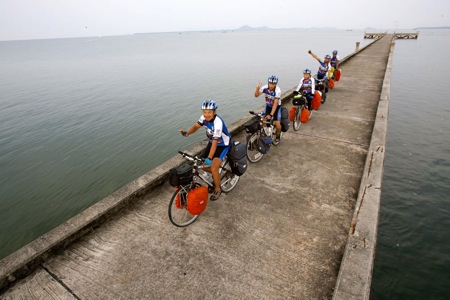 Out on the Pier, Cape Star, near Krabi, Thailand

But, really, after more than 6,000 kilometers and six countries, all I have to say is that I can't wait to get back on my bike and go back to Southeast Asia!

Congratulations on a great trip. It was very interesting to follow. I hope you have the chance to come back and spend more time to travel more slowly!

It's been great reading your posts Jesse, and I know exactly how you feel about getting back on the bike!