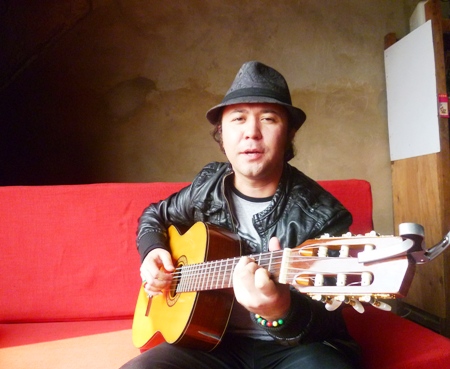 The music of the Uighur people of Xinjiang in northwest China is rich and complex. It evolved out the Uighurs' indigenous musical traditions but was also influenced by the music and instruments of people who came from faraway lands via the old Silk Road.

To the outsider, it is understandable to think that Uighur music today comes in only two flavors: traditional or disco. Uighur musician Kaysar (凯撒) is neither of these. Rather than play traditional standards or rock a Casio keyboard, the 26-year old native of Karamay plays a fusion of traditional Uighur with jazz, flamenco and bossanova.

Kaysar is currently touring China and will take the stage Friday night at Laba for his first performance in Kunming. We sat down with him to find out more about his experiences as a Uighur performer touring China:

GK: How long have you been working as a musician?

Kaysar: I've been performing for 10 years now, first in Karamay when I was a teenager, then in Beijing when I was in university from 2001 through 2005. I moved back to Karamay in 2005 and have been based there since.

GK: Is this your first national tour?

Kaysar: It's actually my second. My first national tour was last year... I played in around 30 cities. I also released an EP at that time.

GK: What sticks out from that first tour for you?

Kaysar: I never thought I'd meet so many brilliant musicians and make so many friends. 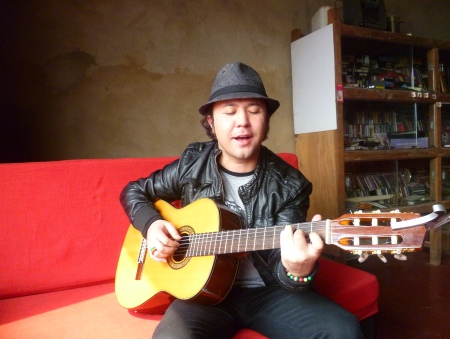 GK: Why are you calling this tour "Musical Journey" (音乐之旅)?

Kaysar: My first tour was solo, it was always just me onstage. This time around I'm trying to incorporate local musicians of whatever background. In Kunming I'll be accompanied by piano and trumpet. I love jazz trumpet, it's great. Oh, there'll be congas too.

I want to use the stage as a platform to interact with the communities I pass through and to show people that there are young Uighurs out there making original music.

GK: Uighur culture is not very well understood by the average Chinese person, do you sometimes feel that you're not just a performer but also a cultural ambassador?

Kaysar: Absolutely. Last year on my first tour I found that a lot of people had misconceptions about Uighurs. After performing before crowds and making new friends I had many people come up to me and tell me that they now look at Uighurs in a completely different way. Music is a great way to break down these barriers of misunderstanding. On this tour I feel like I'm not just representing myself but also Karamay and the Uighur people.

GK: After one and a half national tours do you find that you like any cities more than others?

Kaysar: I've actually enjoyed everywhere I've gone, but of course some places have more vibrant musical scenes than others. Cities like Shanghai, Shenzhen and Xi'an. Beijing is my second home, so I always like playing there. I like Chongqing too, Nuts Club is a great venue.

GK: Are you playing anywhere else in Yunnan aside from your show tomorrow at Laba?

GK: Are there any performers who have influenced your development?

Kaysar: I'm a big fan of Sting, whether you're talking about The Police or his solo stuff. I also have a lot of respect for Tony Bennett. I think it's great that they can still sing at their ages. 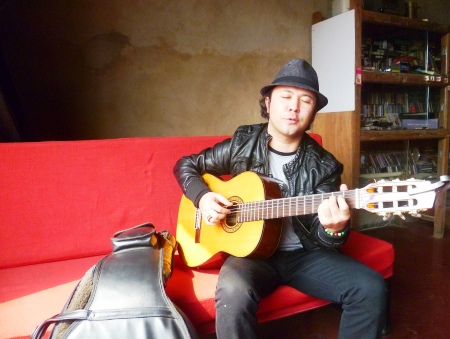 GK: As a performer do you have any goals for the coming years?

Kaysar: I love languages and want to learn more Turkish, Spanish, Italian, Portuguese, any Latin language... they're so beautiful when sung.

I'm not a man of great plans or big dreams, I would be happy if I could make my living by singing for the rest of my life. It's what I love most.

GK: It's probably safe to say that most people in the audience tomorrow night won't understand the lyrics of your Uighur songs. What kind of territory do your lyrics cover?

Kaysar: I have a passion for nature and the outdoors, so I write about that. A lot of my lyrics talk about everyday life. (Smiles.) There are a few love songs in there too.

GK: When you look out at an audience, what do you see?

Kaysar: A lot of performers separate themselves from their audiences and remain distant. I prefer to sit down with my audience before or after a performance and share a drink or some tea. This is the best way to get to know what people want. I love interacting with the audience and learning from them. I want friends, not fans.

Kaysar will play Laba on Friday night at 9pm. Entry is 30 yuan. Visit his MySpace page to listen to MP3s of his Chinese and Uighur songs.

Remember that "Friday night" is not really very precise! Noting the date as well would be a good idea.

This makes two albums that I want but can't get! Anybody willing to send this Kaysar and anything by Tang Ren ti to me in Suzhou?

I'm really excited to see Kaysar play tonight at Wenlin Memory, just wanted to say @ Chicanohek if you want some of his music, check out his page on douban.com use his Chinese name and there are a few great tracks to download.