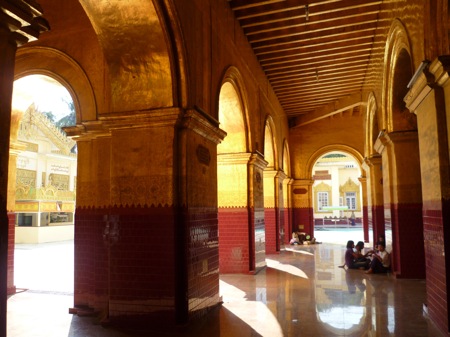 North of Mandalay the train, fueled with wood, crawled at twelve miles an hour across a vast, parched plain, bounded at its remote edges by blue rings of hills. White egrets stood poised, motionless, like herons, and piles of drying chilies gleamed crimson in the sun. Sometimes a white pagoda rose from the plain like the breast of a supine giantess.
-George Orwell, Burmese Days

Logs being transported downstream near Bagan

Mandalay is our final destination in Myanmar. We get there via a 12-hour, 175-kilometer (108-mile) boat ride up the Irrawaddy River from Bagan. The boat departs in darkness and as we chug upstream the sky lightens and we see our last glimpse of Bagan's ruins – a group of stupas perched atop attractive tan bluffs. 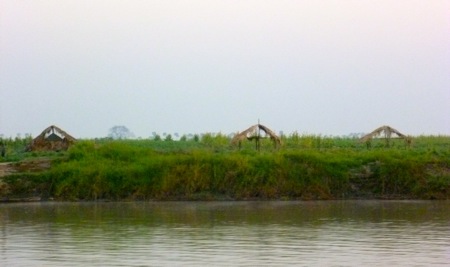 Huts along the Irrawaddy

The river is smooth-flowing and at least a kilometer wide, despite us being more than 500 kilometers from the ocean. Boat traffic consists mostly of some barges carrying heavy equipment upstream and timber downstream. We see very few signs of infrastructure or economic development during the course of the day. The riverside is predominantly flat cropland with a thatched hut here and there and an occasional stupa. 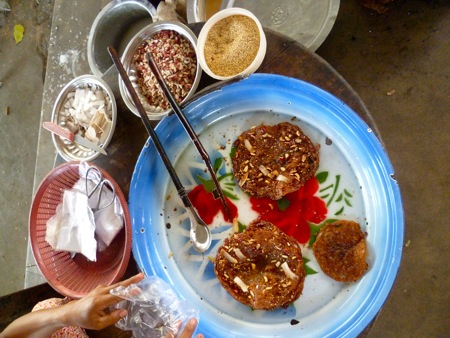 A sweet snack for sale on the street

After disembarking and getting to our hotel, we decide to check out the famous comedy act of the Moustache Brothers. After several rounds of imprisonment for their irreverent jokes criticizing the government, brothers U Par Par Lay and U Lu Maw seem to have settled on an arrangement with the government wherein they and their supporting cast can perform their vaudevillian show, but only for tourists. If not consistently funny, the show is certainly zany. 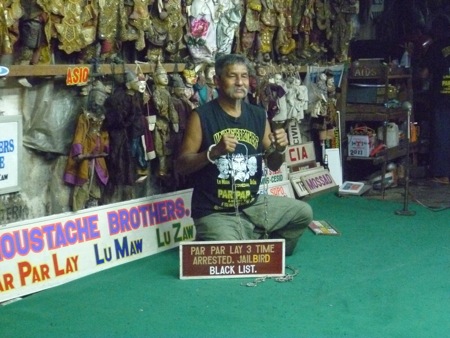 Par Par Lay, one of the Moustache Brothers

Mandalay's buildings are on the whole much newer than those in Yangon, and one can feel China's presence here in the form of Chinese architecture, businesses, residents and imported goods. The city feels wealthier and newer than Yangon, and overland trade with China may be one reason. One local that we speak to tells us unprompted, "almost all Burmese don't like China's influence here." 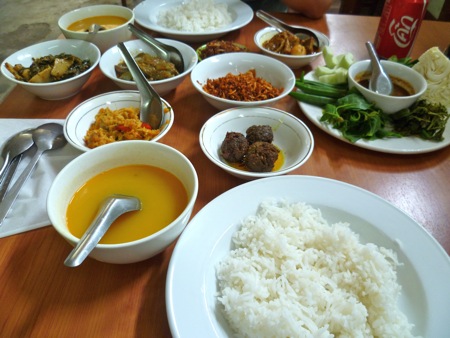 Lunch, including fish and chicken curries and mutton balls

But considering the West's continued economic sanctions against Myanmar it is hard to see how China's influence will not continue to grow. It is a common sentiment among Burmese that that the economic sanctions don't do much good because the wealthy generals that run the country can get anything they want from China, Thailand and Singapore, among other nations. 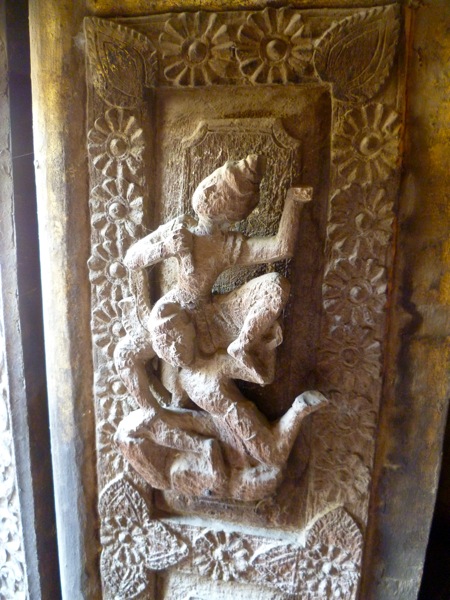 The Shwenandaw Monastery is covered in carved teak

A highlight of our one-day tour around Mandalay includes Shwenandaw Monastery, which is made almost entirely of carved teak that still retains some of its gold gilding. We also visit a gold leaf workshop where we see workers pounding gold into ultra-thin sheets, with each gold sheet receiving five hours of hammering before it attains the desired thinness. 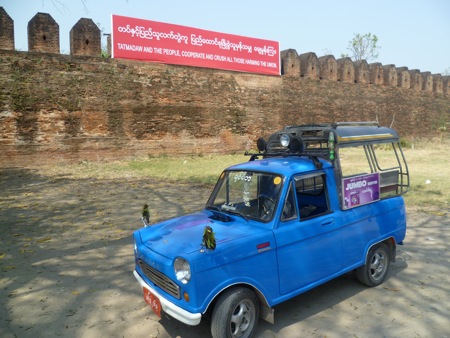 One of Mandalay's many "blue taxis," our rented vehicle for the day

We are somewhat under-impressed by the U Bein bridge in Amarpura, a former capital of Burma located just south of Mandalay. The bridge is made entirely of teak, including around a thousand teak poles planted in Taungthaman Lake. It was probably a pretty interesting site when it was used predominately by locals, but it's become something of a tourist zoo. 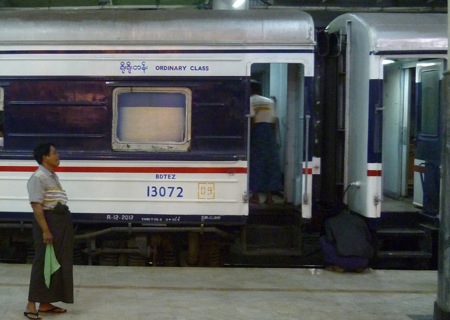 We catch an old Chinese train for the overnight ride to Yangon, sharing our four-bunk cabin with some friendly locals. The berths in the 'upper class sleeper' car, the best available, leave something to be desired. The train rocks and bucks like none we've ever been on before and sometimes we think its going to jump off the tracks. But it doesn't, and 16 hours later we arrive in Yangon to catch a direct flight back to Kunming.

Hi Dan!
I really enjoyed your article on Mandalay and hope to go there some day.
Overall, did you feel it was safe to travel around Myanmar? Did you see any women traveling alone?

Hi Valerie, thanks for the kind words. I don't specifically remember encountering any solo woman travelers, but Myanmar is a very safe place to travel from a personal security perspective.

i am a proud Mandalay resident.

Myanmar is a totally safe place for all to travel around.

there's so many enjoyable places in Myanmar.

Mandalay is the one of the best place in the world for tourist.

many traditional and modernize things mixing up in Mandalay.

many delicious foods can enjoy in Mandalay.

when u arrives to Mandalay u can contact me for any kind of assist.

Myanmar very safe. I also want to clarify that we generals suffer our own problems. For instance, recently it's been getting much harder to get good Cubans, and the Russian caviar just isn't what it used to be. Just to remove all doubt: Myanmar is BEST Myanmar!

In the future would you mind cutting me a little slack? Sure, I'd LOVE to retire to a quiet, backwater town like Kunming and write articles about gardening and hang out at Salvador's, but do you have any idea how much work it is to run a country? Do you Dan? Rebels to squash, peasents to repress, keeping the other generals happy? No rest for.. I mean, not a moment to relax and do the things I want to do. Did you ever think about that Dan? Junta-members have feelings too you know.