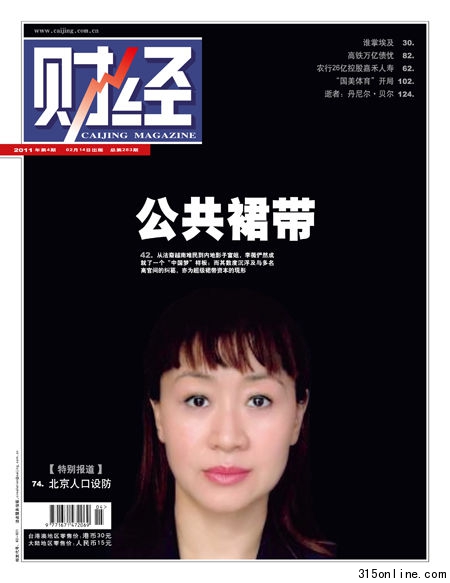 As a young girl, Li Wei fled from Vietnam to Yunnan to escape a brutal war. Three decades later, she has fled mainland China for Hong Kong to escape a web of scandal connecting her to some of the country's most powerful businessmen and officials.

A controversial article published last week in Beijing-based Caijing magazine has been pulled from shelves, removed from the magazine's website and triggered blocks on search engine queries of the names of those involved. But as the article is concerned with sex, money, power and high-level corruption, the story is circulating quickly on the internet.

The focus of the story is Li Wei (李薇), who had a long string of intimate relationships with some of the most powerful men in China and had at one point amassed a personal fortune worth billions of US dollars.

Her official record states that she was born in Guangxi Autonomous Region, but Li was actually born in Vietnam to Vietnamese and French parents. She fled across the Yunnan-Vietnam border to Hekou in Honghe Prefecture in 1970 when she was seven years old, according to the Caijing piece.

Li's rise to wealth and influence started when she became involved in the tobacco industry in southern Yunnan as a broker. She excelled at her work, especially when it came to building her network of guanxi, or relationships. Li acquired a legal residence permit from a contact in Guangdong and married a Yunnan tobacco official.

She used her new husband's connections to cultivate a relationship with Honghe native and then-governor of Yunnan, Li Jiating (李嘉廷), with whom she reportedly had a sexual relationship. She also developed ties with Li's mistress, as well as his son, Li Bo (李勃).

By 1995 she was known in power circles for wearing tight-fitting clothing and helping to run a 7-million yuan (US$1.1 million) "leisure boat" paid for by Li Jiating's mistress and operated in Yangzonghai Lake, near Kunming. The boat was a floating entertainment venue for politicians and businesspeople.

Investigations would later reveal that Li Jiating had stolen 3 million yuan of public funds to help pay for the boat. Around the same time Li Wei reportedly helped the governor obtain Hong Kong residency for his son.

In 1996 Li Wei obtained a Shenzhen identification card and Hong Kong residency and also founded a company in Hong Kong.

Li Jiating came under investigation in 2001 and was subsequently sentenced to death for corruption before receiving a stay of execution. Li Wei was implicated in the case and detained for a short time before being released.

By that time, Caijing reports that she had already become involved in a series of business and romantic relationships with high level officials and businessmen across China, primarily in Yunnan, Guangdong, Shandong and Beijing. At her height she was worth billions of dollars and owned 20 companies spread across China, plus more than 180 fuel stations in Beijing.

Many of Li's relationships involved men who would subsequently be taken down in high-profile corruption cases.

UK newspaper The Independent has published a roundup of some of the most powerful men with whom Li was involved:

Li Jiating
Ex-governor of Yunnan province, sentenced to death for corruption in 2003. Thought to be in Qincheng Prison, Beijing.

Liu Zhihua
The ex-vice-mayor of Beijing, who supervised preparations for the 2008 Olympics, was sentenced to death in 2008 for taking $1.45m in bribes. His sentence may be commuted to life imprisonment.

Huang Songyou
The ex-deputy head of the Supreme Court is currently serving a life sentence for embezzlement and receiving bribes worth £500,000.

After being jailed in 1996 on charges of tax evasion, Li Wei was released earlier this year and reportedly now lives in Hong Kong. There has been speculation as to whether she was granted leniency in her prison sentence in exchange for information about corrupt officials and businessmen she had known. The Independent is reporting that new allegations of high-level corruption may emerge from Li's diary.

Gotta love Caijing's English website's headline for this story: "A Pubic Nepotism"... can't figure out if it was a mistranslation of the Chinese story's title or if they knew exactly what they were saying.

Billions? 200 gas stations? Companies spanning the whole country? 'Acquiring' multiple IDs? That's a lot to amass purely by sleeping with people. This woman was good. She was French.