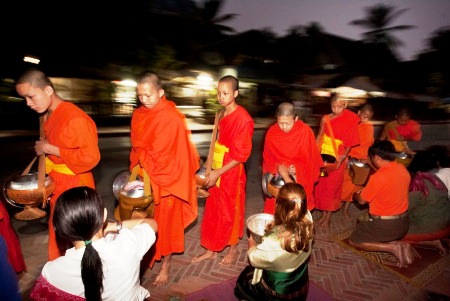 Monks collecting alms in the morning in Luang Prabang, Laos

Jinghong was a wonderful place to rest for two days. Aside from the amazing food, the incredibly friendly people and the beautiful weather, it was just nice to rest the legs (and the butt!) after battling Yunnan's mountains for over a week. Jinghong also sits in a very strategic location. As the capital of Xishuangbanna, it also has very easy access to Southeast Asia. Before departing, our team received some more letters from the governor of Xishuangbanna to be delivered to Southeast Asia as well as the ones we are already carrying from the Kunming mayor.

From Jinghong we backtracked our route a bit, crossing back over the Mekong (or Lancang River 澜沧江) in the northeastern part of the city and up the mountain we had descended just a few days earlier. Make sure you exit the expressway in the beginning following signs to the National Forest and not towards Wild Elephant Valley.

With fresh legs, we zipped right up the 13km mountain. At the top of the hill, the road splits: left is back to Kunming and right heads toward Mohan and Laos. After you take the right the road turns into an expressway, but there is little traffic, a wide shoulder, and a much quicker shot to Laos then any of the other alternatives. From here the road evens out for two or three kilometers, then it drops slowly for about 25km to where we had lunch. 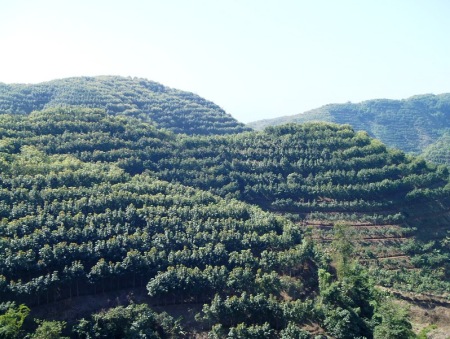 Rubber plantation between Jinghong and Menglun

The views were incredible, with vast mountain ranges covered with tea trees and eventually nothing but rubber trees. There were a few short tunnels on the descent, which was much better than having to go around the mountains, so be prepared with lights, especially in the back. After lunch it was a straight shot to Menglun only 23km more. 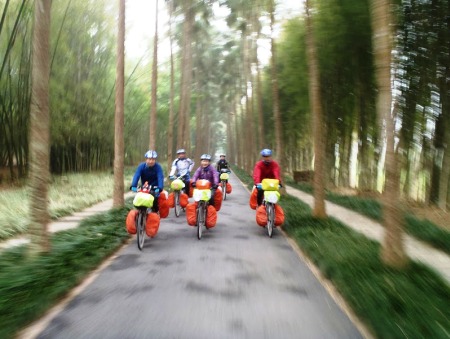 Among the huge rubber tree plantations in Menglun lies the largest botanical garden in China, worth a visit just on its own. It also doubles as an internationally accredited science academy. We stayed in a hotel inside the park, but there are plenty of options outside it as well.

From Menglun we hopped back on the expressway, called Erji Lu (二级路), which soars above the valleys and cuts right through the mountains. Be sure to have all your lights handy again, as we passed though about 15 tunnels today, two of which were over 3km long.

Outside of Menglun there is a slow, steady 20km climb which ends with a 3km tunnel and then descends back down about 12km. About one kilometer after the toll booth at the bottom of the climb is Mengyuan (勐远), a good resting point with plenty of options for food and drink. After lunch, the road began to rise again steadily, passing through numerous tunnels until the final 10km where it descended into Mengla (a right hand turn, 1km off the expressway). 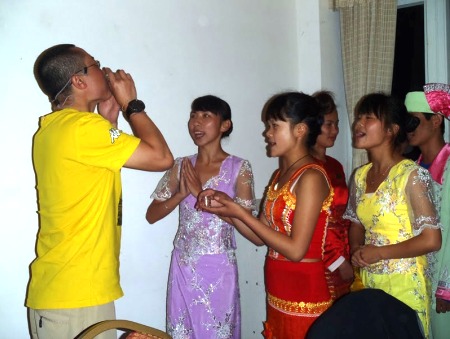 Mengla is a big town with many options for sleeping and eating. On top of this it is only 46km from the Laos border. If you're up for it, there is a wonderful park about 18km away (we took a bus) called Sky Tree Tropical Rainforest Park (望天树热带雨林公园), which has the world's highest canopy walk of 38 meters and plenty of entertainment and wilderness to keep you busy a few days.

It is only 46km from Mengla to the border town, Mohan, on the expressway. It is a bit hilly but the road is great and you barely notice the hills. It's a good idea to leave some time for the border crossing, but we had no trouble at all. It cost me 300 yuan to get my visa on arrival. The next town in Laos is Boten, only 3km from the border. 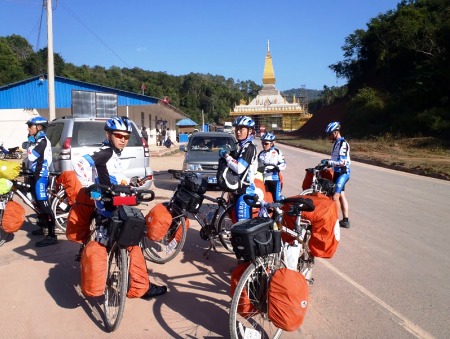 We decided to continue on as border towns are infamous for crime, and this one didn't seem to be any different. A little less than 20km down the road lies the intersection of the roads leading to Luang Namtha (right) and Oudomxay (straight) in the town of Na Teuy. There are two basic guesthouses here, and a few restaurants, both Lao and Chinese styles.

After a wonderful breakfast of Lao-style rice noodles, we set off for Oudomxay, the biggest city in northern Laos. The road which was great all the way from Jinghong, turned to dust only a few kilometers after Na Thuai. The road is being rebuilt by the Chinese all the way to Oudomxay, but there are some nice sections still that they hadn't torn up. At the 28km mark for the day we had lunch in the small town of Meng Namo.

After lunch we continued on and the road begins to rise. Altogether it rises about 500m over a 25km stretch. It is a slow climb with frequent resting points, brief downhills and tons of marvelous little villages were everyone shouts "Sabaidee!!" The children were especially happy to see us, as we handed out candy along the way.

During our climb we could begin to hear music coming from the top of the mountain. Needless to say at the very top there was a small village throwing a party. We stopped and joined the festivities briefly, but continued on as to not impose too much. From here there is a nice and long descent into Oudomxay. Unfortunately, the descent is filled with patches of gravel, or just dust, so we had to take it really slow. 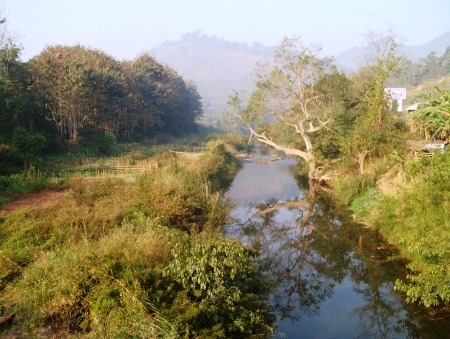 Another day filled with the gorgeous mountains of northern Laos. Leaving Oudomxay follow the main road to the right, then after 5km turn left towards Luang Prabang. From here the road climbs about 14km. At the 11km mark there is a nice waterfall and a small shop for a snack or drink. After the first climb there is a short descent and then another climb lasting about 9km.

From here the road descends to the town of Lak 32 ("Kilometer 32"). There is a nice market here to buy some fruits, as well as one small restaurant and several rice noodle stands. 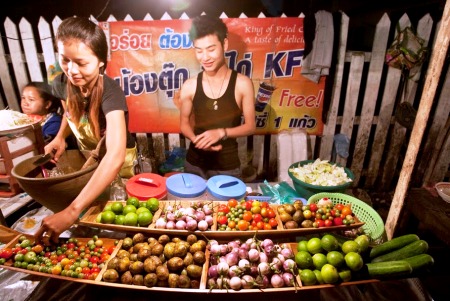 From here there is not much else besides small mountain villages all the way to Pak Mong. It's best to fuel up in Lak 32, as soon after you begin a long climb lasting a total of 22km. We stopped at a spring about half way up and then again at the small village at the top to shoot some pool with the locals while we waited for the rest of the team to catch up.

It became dark fast and we regretted our late start as the 20km of distance/900m of elevation descent into Pak Mong was quite difficult as the road was the same as it was all day – smooth riding one minute, then spoke breaking the next!

Pak Mong is a noisy intersection filled with truck and bus traffic. Needless to say everything closes late and opens early. We were staying in probably the nicest place, run by a Chinese family, and still it was nothing to brag about. I was happy with clean sheets, though. 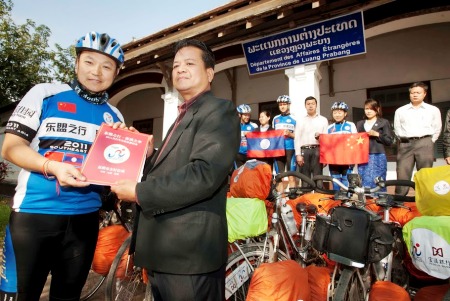 From Pak Mong to Luang Prabang the road is relatively flat, and not one pothole in sight. Unfortunately, the mayor of Luang Prabang had scheduled to meet us that afternoon, so we had no choice but to pile our bikes into a tuk-tuk and skip probably one of the nicer of our rides. From the back of the tuk-tuk, the scenery was still quite spectacular though.

what a wonderful journey. another example of Montaigne's "the journey, not the arrival, matters." these people are providing an insight into a very interesting part of the lonely planet. our best to them all.