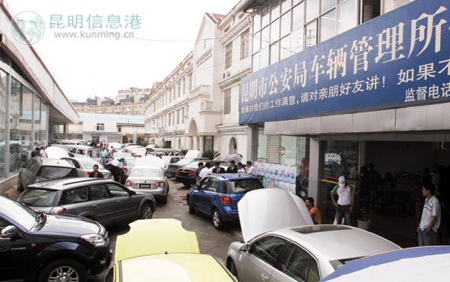 Cars lined up to be registered and receive license plates

Kunming car ownership rates are continuing to skyrocket, with the city adding an average of more than 1,000 vehicles per work day to its streets over the last three months.

There are now more than 1.3 million motor vehicles registered in Kunming and the city is on pace to have added more than 240,000 during the year 2010, according to recently released government statistics.

The majority of new registrations are private cars, a growing number of which are SUVs.

New car owners queue up every Monday through Friday in long lines at the seven vehicle registration offices throughout the city. After their wait is over, they pay their fees, get a license plate affixed to their car and drive away onto increasingly congested streets.

Historical car registration statistics put into perspective just how explosive the growth in car ownership has been in Kunming in recent years – and how fast it is accelerating.

Ironically, the year-end surge in car purchases that has forced registration offices to work overtime processing paperwork might be partially fueled by government efforts to cool the car market.

City and national tax breaks and other incentives to encourage private car ownership are set to expire at the end of the year. Many consumers therefore have been rushing to purchase a car before taxes go up or the government enacts any other measures to reduce growth in the number of vehicles in urban areas.

A local reporter interviewed a customer surnamed Wang at a Kunming car dealership about his newly-purchased car. Mr Wang said that he had spent several months shopping around various dealerships and waiting for a good promotion.

"But then I heard that a lot of the preferential policies are going to be cancelled, and that big cities like Beijing and Shanghai were already issuing new limits on cars," Wang told the reporter. "This alarmed me so I just bought a car right away."

'with the city adding an average of more than 1,000 vehicles per work day to its streets'.

If it were only adding to the streets who would care? Gridlock! Great, no harm, just a bunch of dingbats inside expensive lumps of metal and rubber going nowhere.

However, they don't just add to the streets, they add to the sidewalks, the playgrounds, the parks, the recreation spaces, the basketball grounds, the football pitches. I was even honked at by a car driving down the sidewalk last week. What was I supposed to do - levitate! No, these vermin get into every space possible and not just the streets.

The arrogant witless wonders who propel these cars terrorise communities, pedestrians and just about all who go before them.

Cars are the cancer of Kunming.

Lets hope the subway will do some good...

I'm lovin' it. I bought a new car this week and I look fucking cool in it. James I was just honking at you so you would turn around to see what a great guy I am!

Perhaps they could fill in Cui Hu with concrete and give the cars a little more space...

Nah man, those gulls—aka the pigeons (aka the flying rats) of the sea—are strictly off limits.

Ref @SUV Hangman. You need to make it easier for him. So tell him about the missing 'o' and the missing 'e' either side of the 'ss' in the middle. He may figure it out.

Okay Dan, since you brought up a serious topic (and I appreciate your reportage on this subject by the way!), I'll say what I really think. Before moving to Kunming I had visited here a few times over the past 10 years. But after living here for a while I have come to the conclusion that Kunming is NOT the best place to live because of its heavy vehicle congestion and increasing air pollution. And, judging from the experience of other Chinese cities, I do not believe that local authorities here will try to limit the number of cars on the road largely because there is a hefty profit to be made. So, for anybody out there considering living here in Yunnan for the long haul, I'd say that Kunming is not the best choice. It would be better to live in a smaller city if possible. We should try and take some good photos of the seagulls at Cui Hu these days because they will probably not be around in a few years. Unfortunately, in tourism, what one is selling often ends up being destroyed.

wikkilover and ddx50 thanks for the constructive criticism. i'm ashamed, have sold my car and bought a new book called Understanding Humour. It's a great read, I look really cool when I'm reading it. If I bump into either of you on the sidewalk I'll be sure to smack you round the head with it in the hope that some of the information contained within is somehow transferred.

@SUV owner: "..I'll be sure to smack you round the head.." Ha ha, funny, keep reading, you're beginning to get laughs.