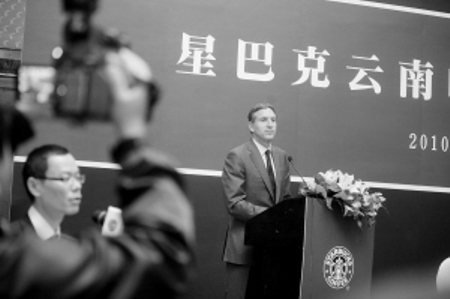 The city of Pu'er, known for its eponymous tea, has signed a memorandum of understanding with Starbucks that is aimed at boosting China's coffee industry and the mainland presence of the world's largest coffee chain.

The agreement, which was signed Thursday by both parties plus the Yunnan Academy of Agricultural Science, outlines plans for Starbucks' first-ever base farm, a coffee development center, coffee farmer support center and coffee processing facilities in the southern Yunnan city.

It was announced at a Kunming press conference attended by Starbucks CEO Howard Schultz and local officials on Thursday.

"Starbucks is proud to collaborate with the Yunnan government to share our coffee knowledge to help Yunnan continue to develop into a top-quality coffee growing region," Schultz said, adding that the company intended to market Yunnan coffee at retail outlets around the world.

Starbucks first began marketing its Yunnan coffee-based South of the Clouds blend in China in 2009.

For Starbucks, the agreement completes its supply chain in a country where it intends to grow its number of stores from around 800 to 1,000, according to a Yunnan Information Net report, which said the company would enter the retail market in Kunming in the coming year.

The Yunnan provincial government will invest three billion yuan (US$450 million) to expand its green bean output from the current 38,000 tons to 200,000 tons over the coming decade.

Starbucks, whose purchases of Yunnan coffee have increased twentyfold in the last three years, did not reveal how much it was planning to invest in its Yunnan operations.

Starbucks in Jiading was a real disappointment in both flavor and consistency... enjoy Yunnan beans and Nescafe instant than Starbucks in China...

So comrades, come rally
And the last fight let us face
Starbucks unites the human race.

Would like to see an actual Starbucks store (or five of them) here in Kunming...Unless I'm mistaken this article is about supply, not retail sale (sigh). Not crazy about Starbucks actual coffee, but their candy coffee's (otherwise known as Frappuccinos) are lovely!

^..."according to a Yunnan Information Net report, which said the company would enter the retail market in Kunming in the coming year."

I did skim over that bit. Hope it happens but having lived in KM for several years I'm somewhat skeptical - have heard rumors that Starbucks would be opening up here every year.

Have written them before encouraging them to move in - I feel confident that our city can support several stores RIGHT NOW, never mind future growth and expansion into tourist destinations (Dali, Lijiang).

I don't want one on every corner, but it would be nice to have a couple here.

I've been told there's a Starbucks coffee shop near Metro in the North (anyone confirm?. Plus one of my Chinese students is having an interview for a management post at a new Kunming Starbucks, so they must be here, or imminent. Hang in there rbusch!

The insatiably greedy, swallow up the little guy with our vast reserves of capital American corporate behemoth known as Starbucks has been driving locally owned cafes out of business all over the globe, while it treats its employees like dirt. I see no cause for celebration at the news that Yunnan is one step closer to being corporatized and globalized. If you can't live without your Starbucks fix, go back where you came from instead of cheering on the ruination of wonderful, funky, unique Yunnan. A Starbucks in Dali?! I hope I never live to see that day arrive. Wake up.

Well I'm sure there are plenty of fools who will lap it up. But I think there are enough decent, comunity minded people in Kunming to ensure that starbucks has very little effect on the places we all visit and love.

It will be very tempting to egg the windows if one ever opens on wenlin jie...

Starbucks integrating Yunnan coffee in its global supply chain is probably a very good thing for the Yunnan economy. It will raise the profile of the yunnan coffee and will also probably significantly increase directly the sale volume.

However at a personal level I would be dismay to see one open in Wenlin jie / Wen hua xiang. Starbucks have financial capacity that make the competition with local bar/cafe totally unfair.

Why is it a big advantage to have some much cash reserve? They can buy their shop, when most cafe owner just don't have the cash for that. If you own your shop you are not at the mercy of a landlord raising your rent by 50% and thus making your biz not sustainable. It also mean that you can afford to spend more in renovation and decoration because you know that you have 10 years to recover those costs, instead of the 6 years most local cafe have to count on (after one renewal, when biz is finally starting to be good, the rent can go crazy). Owning their shop also mean that after a few year Starbucks operational costs will raise only moderately (rent is a big chunk of operational cost) when local cafe will see their costs rise due to rent pressure. Owning a shop also mean that Starbucks will have far lower operational costs than most local cafe, making it way more profitable. Why lower costs, because instead of paying a rent they make an initial investment that they totally recover (possibly make another profit on) when they close business and sell the place.

Local cafe are mostly run by passionate people who love what they are doing and are not globalized corporation with huge cash flow. So it is sad to see cities losing their local cafe scene to Starbucks and the transformation of local area into "mall streets". I am not an anti-Starbucks guy, they brought a cafe scene in many places that did not have one to start with, but Kunming has already a cafe scene which creates unique cross cultural interaction and has grown to be an important element of Kunming culture.

It's greatly up to us, as customers, to support the local cafe scene by choosing them over Starbucks, if it comes to that.

Personally, I see it as a win-lose. I mean it will help the economy in terms of purchases of Yunnan coffee. But the above comments are right, it will inevitably cause many smaller cafes to close which is a shame. I'm curious to see what the people of Yunnan want, if they think this is a good thing or not.

Starbucks is not going to open on Wenlin Jie, at least not in the near future. They will start off with a few high-profile expensive locations in modern shopping complexes, like they do in every new city.

My guesses would be Shuncheng Mall, Gingko, or somewhere along Beijing Lu in Beishi Qu, where they know there will be a subway stop. If they come to the Cuihu area it will probably be somewhere in or around the park itself.

1 year later, and there are at least 3 Starbucks stores in downtown, 2 of which I've been a customer at and the other one (next to KFC) I've walked past numerous times; that store is within walking distance of the other two.

There may be even more Starbucks stores than this....let me know where the other ones are.