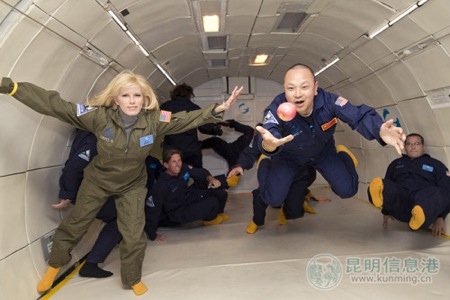 The explorer took off from Cape Canaveral in the US aboard a specially retrofitted Boeing jet. He then experienced several 30-second periods of weightlessness as the plane repeatedly climbed to an altitude of 9,700 meters and dove to 7,300 meters. Along for the ride was an apple from Yunnan's Zhaotong prefecture.

Jin adds his zero gravity experience to a long list of more physically arduous accomplishments such as summiting the highest peaks of every continent, trekking to the north and south poles plus crossing Greenland, Xinjiang's Taklamakan Desert and the Sahara.

He will soon start recruiting team members for a 2011 bicycle journey from Kunming to Singapore, via Laos, Vietnam, Cambodia, Thailand and Malaysia. 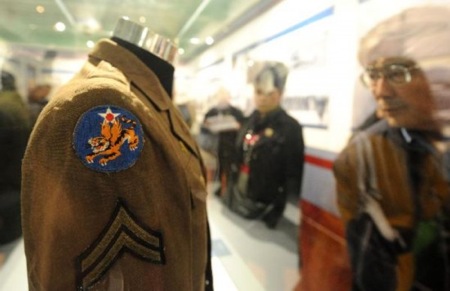 The relics, including original uniforms and insignias, are being displayed at the museum for an undefined period of time as part of an exhibit about the history of the Flying Tigers.

The boats would purportedly help relieve congestion on city streets, but implementing the project would require building dams to maintain a water depth of at least two meters on stretches where the boats would operate.

New fish species discovered in Erhai
A new species of fish, Triplophysa jianchuanensis, has been discovered in Dali's Erhai lake, according to a paper in the scientific journal Environmental Biology of Fishes.

The fish is a species of loach, small freshwater bottom-dwellers distributed across Eurasia.

Jin Feibao goes zero gravity...Along for the ride was an apple from Yunnan's Zhaotong prefecture.

Just for the record, it is illegal to import fresh fruits,vegetables,meat or fish into the US,Canada,EU and Australia.By breaking such rules you endanger another continents' ecosystem, ie. snakehead fish,flying carp, wood borer beetle problems that currently plague the US and Canada. Just another example of "bu ting hua ren" attitude. The rules only apply to others.

I think he meant to say smuggle,not import. You can legally import all of the items mentioned.