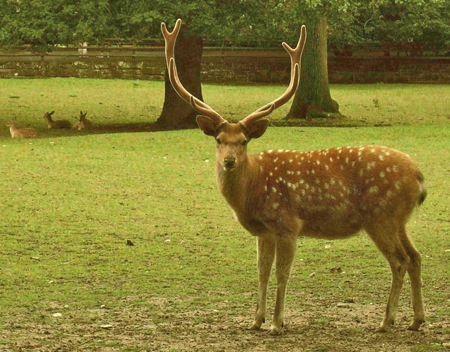 The sika deer is a top level protected species in China.

"I wouldn't have believed it if I hadn't seen it with my own eyes," said Yunnan Wild Animal Park vice president Yang Dehai as he tried to comprehend how a pack of five dogs got into the zoo in northeast Kunming last week and went on a bloody rampage, killing six protected deer.

Zookeepers became aware that something was wrong last Thursday morning when they heard the sound of barking dogs and yowling deer. In addition to killing six deer, the dogs also wounded two other deer and an emu.

Officials at the 186-hectare zoo said they were baffled about how the dogs could have gotten in: the park is completely encircled by a 2.5-meter-high chain-link fence. The police were called shortly after the attack and inspected the entire length of the fence without finding any holes. Zoo officials also said that workers inspect the fence every day.

Zoo management said it was highly unlikely that the dogs could climb such a high fence and that someone must have purposefully lifted the dogs over the fence and released them into the zoo.

If it was intentional, motivations for the attack are unclear at this point, but a zookeeper suggested that the dogs' coordinated movement could be evidence that the mongrel dogs were trained for hunting. The dogs acted together to drive the deer onto a steep hillside before delivering well-placed fatal bites.

Three of the five dogs were beaten to death by zookeepers. A Yunnan Net reporter who saw the dog carcasses agreed with the zoo's assessment that the dogs looked well-fed and groomed, which supports the theory that they were domesticated rather than feral.

Two of the deer fatalities were fallow deer (Dama dama) and four were sika deer (Cervus nippon). The sika deer is a top level protected species in China, where very few wild pockets of the species exist.

The zoo, which is also home to giant pandas and tiger fishing, is offering an "ample reward" for further information about the attack.

Images of the attack's aftermath are available here, but be warned that they are somewhat graphic.

I am more astonished that a pack of five dogs would actually attack deers... On the photos the dogs do not look that big, the typical Kunming city mix. Yes, the deers lived in a zoo, when they saw the pack (no matter how it got in), they definitely panicked, as they never had an encounter with another predator before and of course the dogs chased them. But it's beyond me why a well fed, or at least not starving dog (see pictures) would bite to kill.

I hope that this will have no repercussions on domestic local dogs (as I own one), and I hope that the police will realize that this was a well planned and well executed attack (don't get me wrong, no positive vibrations here).

Three of the five dogs were 'beaten to death by zookeepers'. No tranquilliser guns available in a zoo presumably holding lions, tigers? Beating animals to death somehow seems a little, well, 'unzooish'. What would happen in a real emergency?

The dogs were reported to have been beaten to death while the zookeepers were trying to stop them from attacking the deer.

Well - there's definitely some free food for the lion and tiger (and other carnivore) exhibits - but really - why would someone train FIVE dogs to kill and then dump them in the zoo? Sounds like a former sour grapes employee (not the brightest bulbs on the planet sometimes).