Urban hiking on the Jinzhi River 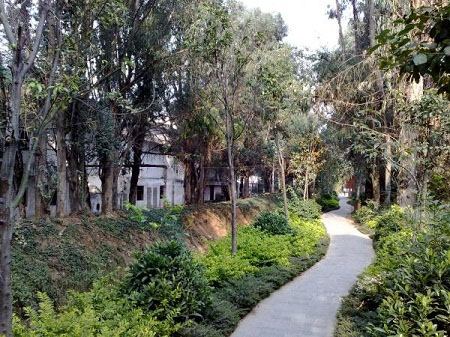 Kunming's recent urban development is sometimes a cause for concern, with its heavy focus on automobile transportation and noise and pollution from widespread demolition projects.

But sometimes one discovers a reminder that other plans are taking shape to change the city in an altogether different way. One such project is the greening of the Jinzhi River (金汁河), which is re-exposing an ancient waterway running through the city. [See Wednesday's interview with the man behind the project]

History
The Jinzhi River started life as a man-made irrigation channel at the time of the Nanzhao kingdom (738-937), when it was called the Jinleng River (金棱河). In the year 1040, the river was dredged and embankments built along it under the auspices of the 10th king of Dali, Duan Suxing (段素兴).

More recently, as Kunming expanded, the waterway ceased to be used as an irrigation channel and became an open sewer, emptying domestic waste water into Dianchi (滇池). Starting in the 1980s, water supply priorities caused water to be diverted from the Jinzhi, sections of it were covered by buildings, and the river was gradually forgotten. 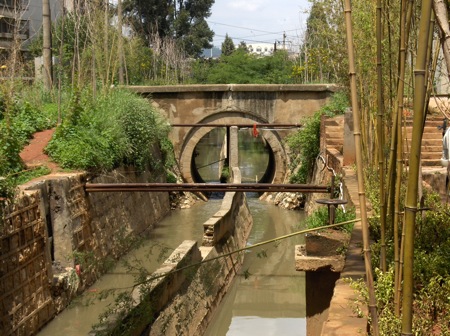 A new beginning
Now, the decline of the river has begun to be reversed. Buildings have been demolished, riverside pathways laid, and the course of the Jinzhi has become a long thin park. The river is still short of water, with some sections dry and most others far from clean, but the green strip that accompanies it offers a pleasant stroll through hidden parts of the city. 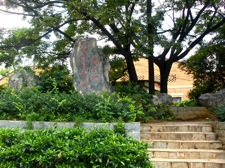 The entrance to the riverside path at Tuodong Stadium

One place that's easy to pick up the trail is at Tuodong Stadium (拓东体育场). Join the path at the northeast of the stadium for the walk upstream. The waterway's route is somewhat insulated from the city – as such there are quiet stretches of greenery occasionally punctuated by a noisy road which serves to bring you back to the present day.

The river also extends in the other direction, taking you south across Tuodong Lu (拓东路) and down towards Cha Jie (岔街). Intrepid readers should feel free to explore. 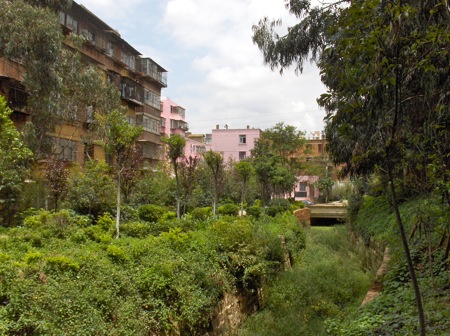 The route
Walking east from the stadium, the first interruption to the trail is at the first ring road, Huancheng Dong Lu (环城东路), where the river goes underground for a while. Turn right and cross the road at the first pedestrian crossing – you'll be at an alley which cuts off the corner of the block. Head along the alley and cross Liming Lu (黎明路) and you can rejoin the river.

Another big interruption is the second ring road, Erhuan Dong Lu (二环东路), noticeable because of its elevated second level. Turn left, cross the road, and pick up the river inside the small triangular-shaped park just outside the ring road.

2271Tanhua Temple#http://www.gokunming.com/en/listings/item/tan_32337/# (昙华寺), a Buddhist temple with extensive gardens separated by a tunnel under a road. The tower at the back of the temple grounds provides some good views of Kunming.

Successive extensions of the river redevelopment over recent months have meant that the river trail now goes up into the northeast of the city, near to Baiyun Lu (白云路), before joining into other green spaces. A bridge across the river to pick up the path on its east side is currently blocked, but chances are that another visit in a few months will again extend the walk.