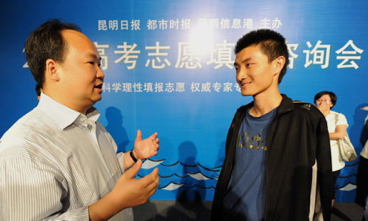 An armless high school student who used his feet to take the Chinese university entrance exam and earned the top score in Kunming's Yiliang County is being recognized as one of the most inspirational stories of this year's exam.

Yang Mengheng (杨孟衡), 19, scored 594 points out of a possible 750 on the National Higher Education Entrance Examination, commonly called the gaokao (高考), which was held during the second week of June. As well as topping out Yiliang, his score also ranks within the top 60 in Yunnan province, where more than 220,000 students took the test.

Both of Yang's arms were amputated at the age of six after an accident involving a high-voltage electric transformer. After the family recovered from the trauma his father decided the only course of action was to confront Yang's disabilities head-on. 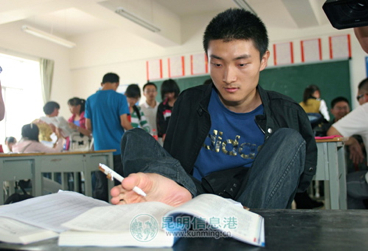 "We knew that we couldn't support him for his entire life," said Yang Hongbin. "We encouraged him to face every difficulty and overcome it by any means possible."

Yang eventually learned how to write with his feet as well as do daily tasks like laundry and brushing his teeth. He even spent a stint training for the Chinese Paralympic team before giving up due to lack of a suitable sport for his disability status.

He says he hopes to attend Renmin University in Beijing in the autumn and major in English with another language as a minor.

Wow, this guy is amazing. Jia You.