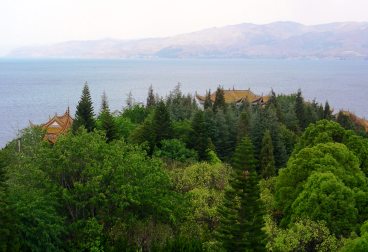 Sometimes everyone needs a bit of solitude.

Solitude Hill, aka Gu Shan (孤山) aka Yinghai Shan (瀛海山), is 70 kilometers south of Kunming, but it can feel a world away from the electric bike alarms, car horns and construction sounds that seem inescapable here in the Spring City.

A few hundred meters off of the southwest shore of Fuxian Lake, Solitude Hill is an island made by the peak of a mountain that rises precipitously from the bottom of the lake, which with a maximum depth of nearly 160 meters (525 feet) is one of the deepest in Asia.

Solitude Hill runs roughly north-south and is only a few hundred meters away from the Sunshine Coast (阳光海岸) beach area, which is the point of departure for the watermelon seed-shaped island. 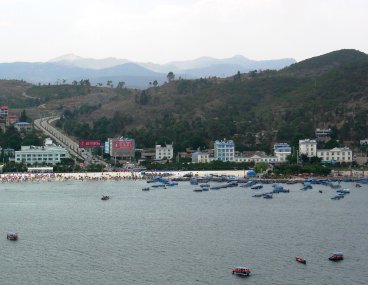 The beach at Sunshine Coast is made of imported sand but is still a nice place to sunbathe or go for a swim. Yes, the water is that clean, with visibility usually around five to six meters, although it is rather chilly for most of the year due to its depth. There are plenty of good local restaurants near the beach, many of which specialize in fish and some that make their own lufu – a creamy fermented tofu – often loaded with ginger. The area also has several small hotels.

Once you're ready to head to the island you can cross over to the island by yourself on pedalboats of varying sizes or kayak. You can also hire two men to ferry you across on a long narrow boat that comfortably seats several people. Regardless of which option you choose, you will need to go through the main boat ticketing office at the pier – boat rates range from 50 yuan (round-trip) for the ferry to 150 or more for the pedalboats. 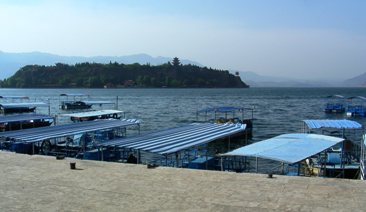 We took a ferry to Solitude Hill, with our two rowers struggling against strong winds and choppy waters under an intense Yunnan sun. It took 20 minutes to get to Solitude Hill's west side, which has the only pier, conveniently located near the ticketing office – it costs 20 yuan to enter the island, which is crisscrossed with footpaths and is home to a smattering of pavilions with beautiful vistas, a temple, and a hotel.

A stroll around the island plus a jaunt up to the peak don't take more than an hour or two. Facing to the west, the Sunshine Coast beach is visible and you can still hear beach revelers and some traffic noise. It isn't until you're on Solitude Hill's east side that it earns its name.

Facing eastward from Solitude Hill, there is a vast expanse of blue water against a background of gently undulating islands. The lack of traffic on Fuxian's east side – for now at least – plus the considerable distance to the east shore translates to wind and waves being the main ambient sounds here.

There is a government-run hotel on Solitude Hill's east side which is on par with an average three-star hotel in Kunming – until you open the room's curtains and step out onto your balcony. 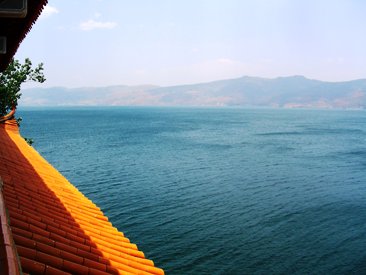 Officially known as the Ancient Dian Kingdom Culture Garden (古滇国文化园), the hotel is the only place to stay on the island and has the only restaurant, which compares favorably with the food offerings over at Sunshine Coast. Rooms are fairly basic and run from 160 yuan for a standard room to 338 for a luxury suite. The hotel grounds are located on a somewhat steep slope covered in trees and flowers.

The hotel is lightly staffed – we had to walk around calling out for staff for a few minutes before we could find someone to register us at the front desk – but this is what the island is all about. When we stayed at the hotel, it seemed that we were the only guests at the time, and there were maybe a couple dozen tourists passing by over the course of a day.

Solitude Hill is great for all the things that Kunming isn't: swimming in clean, clear lakewater; jogging on a mountain path, sitting and reading while waves lap at the shore; or simply enjoying silence. Given its proximity to both Kunming and Yuxi and the growing number of car owners in each city, this best-kept secret's days are numbered.

Getting there: To get to Solitude Hill, you must first get to Sunshine Coast on the southwest side of Fuxian Lake.

From Kunming take the Kunming-Yuxi Expressway (昆玉高速) south, getting off the highway at the Jincheng (晋城) exit. Take the road from Jincheng up and over the hills separating the Dianchi and Fuxian Basins. After having fully descended, you will take a right at the next major intersection followed by the next left, which will take you up then down toward Fuxian Lake. Sunshine Coast is the area where the road meets the lake.

An alternate scenic route can be taken by going through Chengjiang, the largest town on Fuxian Lake: Get off the Kunming-Yuxi Expressway at the Majinpu (马金铺) exit before heading east and over the hills into the Fuxian Basin. Take the first road on the right after passing through the Chengjiang toll gate until you reach the four-lane road that circles Fuxian Lake. Take a right onto this road and follow it until you reach Sunshine Coast after a slightly unconventional lane switch – keep a sharp lookout for the sign!

Rooms can be booked at Ancient Dian Kingdom Culture Garden, the hotel atop Solitude Hill, by calling (0877) 8551186.

Thanks for the writeup. Does anyone know which bus station goes to Fuxian? (especially confusing since the switchup) Also, where does the bus stop? After getting off the bus to Fuxian lake, what is the best way to continue on to Sunshine Coast?

Kunming south bus station, at the Luosiwan trade center, accessible by metro. Get a ticket to Chengjiang (about 16元 per person), 1.5hrs due to road improvements (due to complete ~2015/2016). By 2017 or so the metro will come all the way to Chengjiang.

From Chengjiang, you can get a public bus halfway down the western side of the lake to Luchong very cheaply. From there hail a bus further on to Jiangcheng, then get out to the port.

Alternatively, you can get a bus straight to Jiangcheng from Chengjiang.

You can also probably book a private taxi direct to the Jiangcheng port for the island for around 150元 from Chengjiang, a bit more if you want them to wait for you to check it out and go back same day.